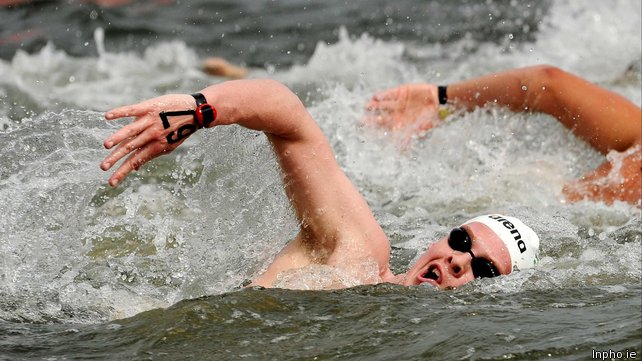 World ranked distance swimmer and Rio 2016 hopeful Chris Bryan along with some of his High Performance Team Mates have took part in the annual Thomond Swim 2014 which took place in the River Shannon, Limerick next Saturday, 26th July.

Mayor of Limerick, Cllr Michael Sheahan officially started the Limerick Masters Swimming Club annual Thomond Swim at St Michael’s Boat Club at 6.30pm on Saturday evening which was a spectacular event on a balmy summer weekend. University of Limerick Student Chris Bryan from Shannon trains at the High Performance Unit at UL and hopes to make the Irish team competing in the 2016 Olympics in Rio.

The course remained the same as previous years starting at the slipway at St Michaels Rowing Club traveling upriver under Sarsfield Bridge to a turning buoy above the Curragower Falls, under King John’s Castle, The Courthouse, Arthur’s Quay, Shannon Rowing Club and back down to finish at St Michael’s The overall distance is 1800m.

The best viewing points for the event are along O’Callaghan Strand and Clancy Strand on the north side of the river, Sarsfield Bridge, Arthur’s Quay and Howley’s Quay.

The Thomond swim is again designated as a qualifying race for the prestigious Liffey and Dun Laoghaire Harbour swims in Dublin thus creating interest among open water swimmers from the East Coast and this year an even greater representation is expected from the East coast.

“The numbers of competitors in the Thomond event will be in excess of 100 on this occasion and in addition to those from the east coast there will be swimmers from Cork and Galway as well as from numerous clubs throughout the Munster and the Mid West regions,” said Dee Maguire, Thomond Swim PRO.

“This year the event was supported by Limerick City and County Council and the Mid West Regional Authority through the Nautisme Espace Atlantique program. It also takes place in the middle of the Limerick City of Culture summer programme and the event is the cleanest river swim in the country.”

Related Topics:eventnewspressPromosportsportsthomond swim
Up Next