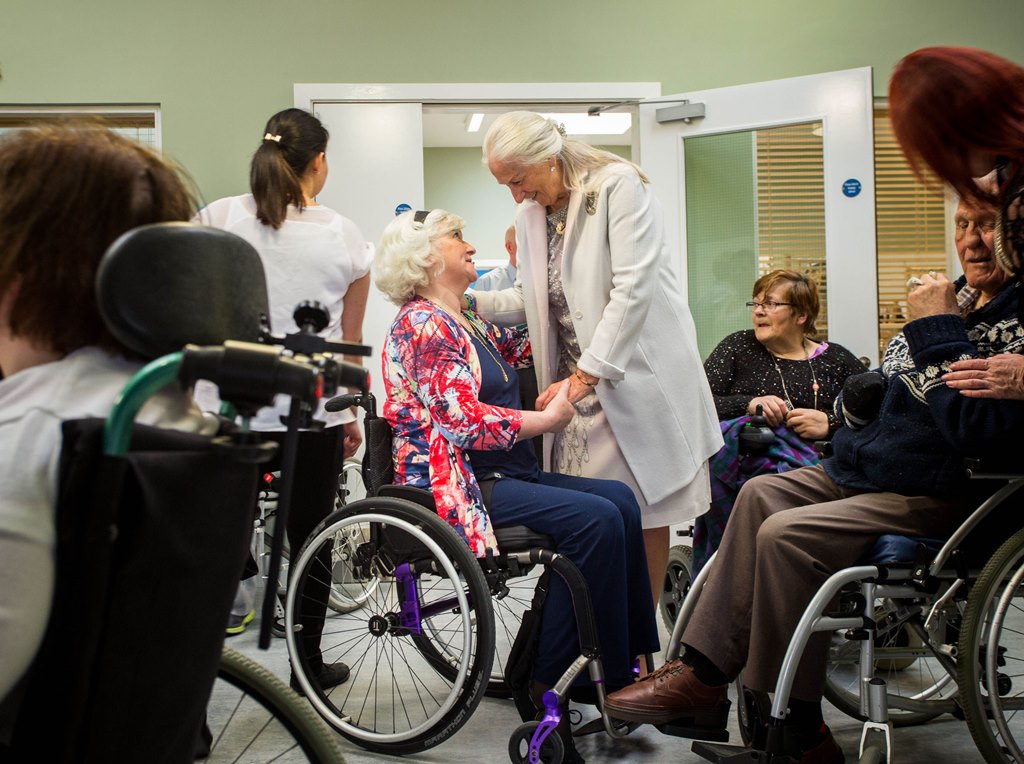 Pictured above: Lady Geraldine Dunraven shares a special moment with Catherin O’Grady, member of the Irish Wheelchair Association at the official opening of  The Dunraven Centre.

On March 20 2015, One of Ireland’s greatest champions and noted philanthropist Loretta Brennan Glucksman officially opened a state of the art Resource and Outreach Centre on behalf of Irish Wheelchair Association (IWA). As former chairman of The American Ireland Funds, Ms Brennan Glucksman helped raise nearly $400m for charities throughout Ireland. The Ireland Funds alongside the JP McManus Charitable Foundation supported the work of Irish Wheelchair Association by providing grants towards the new centre, which is located in the Limerick Enterprise Development Park, Roxboro, Limerick.

ady Dunraven meets with members of the Irish Wheelchair Association Limerick. The new Resource and Outreach Centre named after her late husband Lord Dunraven was officially opened at an event which took place on Friday, 20th March 2015.

Following the closure of the Krups factory in Limerick in 1999, the Limerick Enterprise Development Partnership established itself as a major force for social change in the greater Limerick area. Speaking at the official opening of The Dunraven Centre, CEO of Irish Wheelchair Association, Kathleen McLoughlin explained:

‘Over the past 16 years, the Limerick Enterprise Development Partnership has become an important channel for change in the social, economic, educational and regenerative processes underway in this area of Limerick.

Irish Wheelchair Association hopes to contribute to this model by delivering high quality services to the people of Limerick and continue to support and promote independence, dignity and enhance quality of life for people with disabilities and others with reduced mobility. The Centre will also be available to other community and voluntary groups located in the area.

Irish Wheelchair Association and our members would like to thank the JP McManus Charitable Foundation, Loretta Brennan Glucksman, The Ireland Funds and other supporters who through their generosity made this project possible. Irish Wheelchair Association has ambitious plans and it is the support of those like the JP McManus Charitable Foundation and The Ireland Funds that allows us to achieve them’.

Members of Irish Wheelchair Association have identified that ‘quality of life’ means opportunities to socialise, laugh, learn, work, travel, enjoy their homes and be active in their community .The Dunraven Centre has created an environment which enables individuals to achieve their  goals and reach their maximum potential. Already a hive of activity, The Dunraven Centre has 25 staff working alongside members and volunteers on a daily basis, four accessible buses on the road seven days a week and over 60 members participating in programmes and initiatives during the day, evenings and weekends which enable them to lead independent, active and fulfilling lives.

For more information, contact Anita Matthews on 018186488 or email her at [email protected]