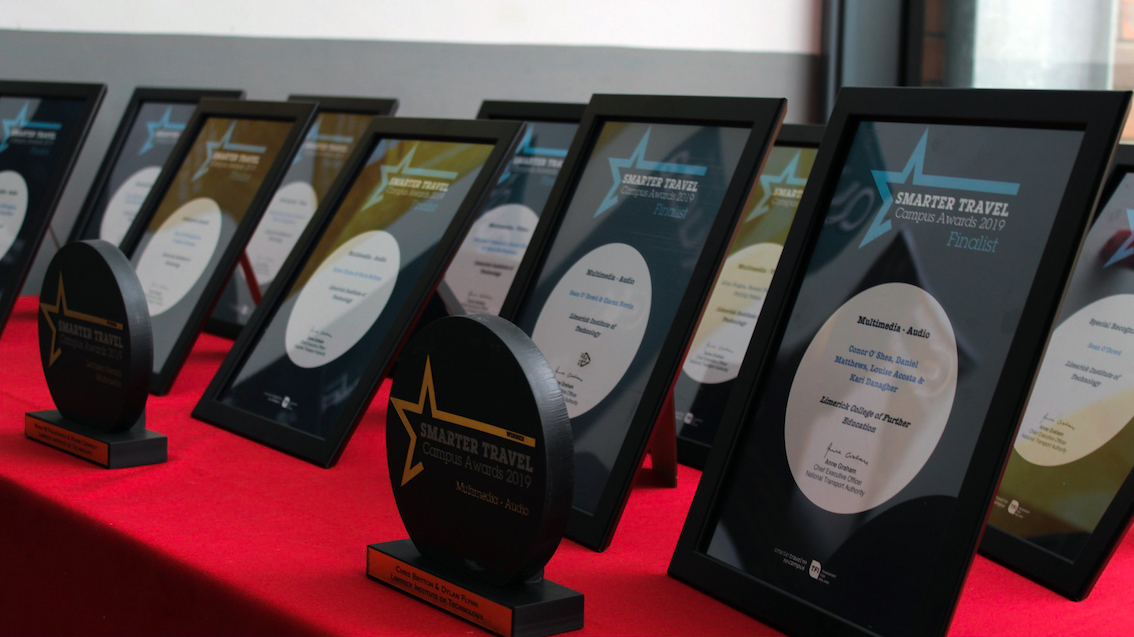 Creative Broadcast & Film Production students and staff of LIT were delighted to present the LSAD Film Media Showcase19 at the Millennium Theatre. The daylong showcase was a joyous celebration of the ingenuity, creativity, and often times intriguing work created by the students of Creative Broadcast & Film Production.
Nigel Mercier dropped in on the day to offer an overview of the role of a broadcast & Film extra. Nigel’s company, “SetExtras” is the leading extras company in the West of Ireland. Providing extras since 2016 for TV Commercials, Music Videos, and local International Films. This was followed by “Scene and Heard”, directed by Eoghan Neff, Lecturer on the Music Technology and Production programme, whose students from the Interactive Audio module demonstrated live interpretations of audio recorded from a selection of short video scenes.
The showcase reception kicked off with great anticipation and was created and run by first-year Creative Broadcast students which ran in perfect harmony with music put together by students of Music Technology directed by lecturer Mike Gavin. The Screening itself was a festive celebration of all things film, the energy, and enthusiasm of the audience and the general comradery amongst the students was infectious, a glorious night of visual storytelling and jubilant entertainment was had by all.
Special thanks to the film & media companies who came on board to celebrate and support the work of these talented filmmakers. It is brilliant to witness the growing film and media industry here in Limerick and their support of emerging filmmakers through offering work experience and supporting the showcase is remarkable.
Below are the list of the awards, the supporting Film & Media Production companies, and the winning filmmakers.
Winner of the Smarter Travel Campus Awards in Multimedia Video presented by Sadbh Hanley of Smarter travel Limerick went to Mark Bergin, Edward Hannon, & Ruth Barnes for their short “Counting Steps” This was a national competition coordinated by Sharon Daly of transport Ireland. A cleverly conceived short advert directly relatable and superbly executed. The judges on the Smarter Travel educating panel were extremely impressed by the quality and professional standard of the winning film.
Winner of the award for Art Direction – Selected & presented by Michelle Brassil of Troy Studios went to Amerson Fortuanto for his film “Out of time”. The award was collected on the night by fellow “Out of time” production crew members & actors Saoirse O Connor & Eoin Leen. The film also picked up the Award for Cinematography from Shane Serano of Crude Media. An outstanding film created with great detail and beautiful cinematic accuracy.
A first-year student of Creative broadcast & Film Production, Amerson is a DOP to watch out for in the future. The Winner of the award for Motion Graphics & VFX – Selected & presented by Róisín Buckley of Piquant Media went to Sean Ó Donoghue for his film “IV” specifically for his excellent use of VFX in live action.
The winner of the award for the best Documentary film – Selected & presented by Cian Reinhard of The Limerick Post went to Marian Gonzalez for her brilliantly researched film “Franks Ashes”. A superbly presented piece of factual film making based on the working life of Frank McCourt.
Winner of the best Original Sound Mix – Selected & presented by Louise Cantillon of Spin South West went to Mark Bergin for his Radio Drama “Quota”, a skillfully mixed, beautifully layered audio drama which we will hopefully hear across our airways very soon.
Winner of the best Original Script – Selected & presented by Diarmuid McIntire of the HearSay International Audio Festival went to Nathan Campion for his film “Psychlical”, a wonderfully scripted exploration into the art of storytelling.
Finally, the Richard Harris Award in Film Excellence – Selected and presented by Zeb Moore went to Fiona Galvin and Adam Littlewood for their film “Caesar”, a deeply moving and touching tale of the beauty of friendship and reaching out in the face of the conformity.
Well done to all the students who submitted to the showcase and a special thanks to Louise Cantillon of Spin Southwest for acting as MC for the night. Thanks also to Simon McGuire Showcase technical director & projectionist, Liam MacCarthaigh live broadcast coordinator, Art O Laoire technical supervisor, Pat Carney equipment supervisor, Jamie Griffin Photographer, Mike Gavin Musical Director, Edward Hannon & Mark Bergin showcase motion graphics, and all the additional members of the showcase committee, Ruth Barnes, Nathan Campion, Róisín Quinn, Mark Griffin, Muireann De Barra, Róisín Crowley, Alyssa Fleming, Clodagh Cummins, Connor Gibbons, Donagh O Shea and Gerard Meagher as well as to Nora Ni Fhlatharta showcase coordinator.
LIT is already planning for Showcase 2020. Hope to see you all there when Creative Broadcast & Film Production will have a whole new programme of short films for your entertainment.

About the Creative Broadcast & Film Production Programme
Creative Broadcast & Film Production is a Level 8 BSc (Hons) Film and Screen Broadcast production programme. Students explore the dynamic world of Film & Broadcast Media Production and develop the key creative, technical, and storytelling skills to succeed. This skills-based programme offers students an exciting opportunity to explore the world of the broadcast media industry. It covers a range of disciplines across Film & TV Production, Visual Effects, editing, radio, audio mixing, photography, as well as broadcast technologies across a range of new and traditional media platforms. They offer our students a range of prospects for both academic & career progression in the broadcast, film, creative media industries, as well as extensive hands-on production work experience. If you have a story to tell, they will show you how.
For CAO students hoping to attend the programme in September, the showcase is a wonderful opportunity to find out more about the programme, see student examples, and meet the lecturers.