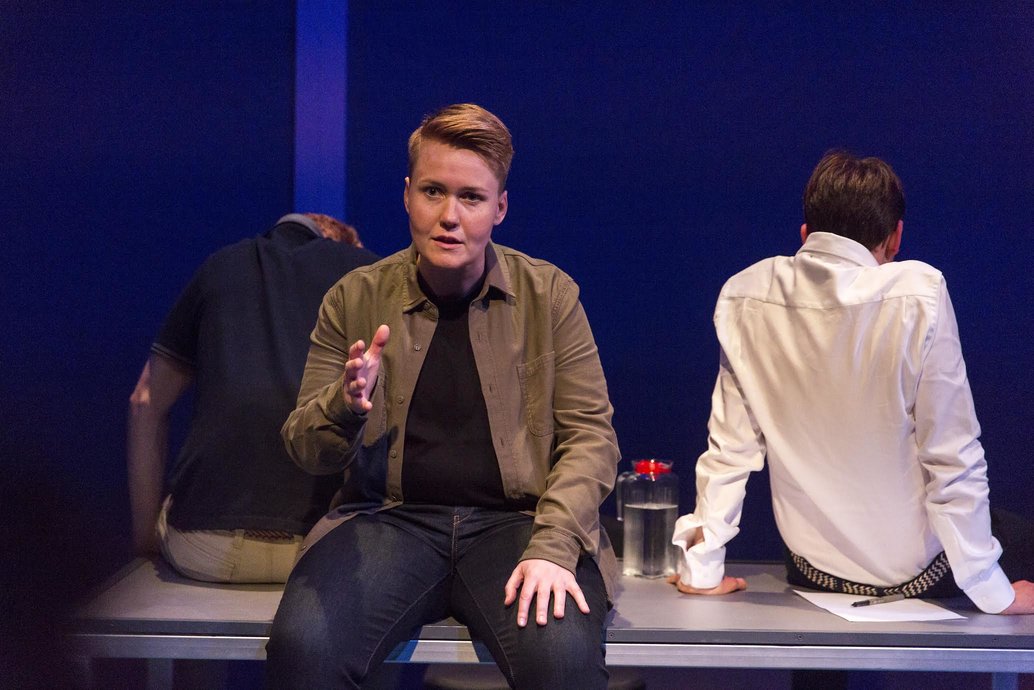 Luck Just Kissed You Hello at the Lime Tree Theatre

Three men gather at the bedside of their dying father, Big Ted Donovan. Big Ted was a larger than life presence in their lives, but now he is a dying man in a hospital bed, and decisions have to be made. A eulogy has to be given but there is more than one view of this man, and as this play makes clear, of any man.

Mark (Amy Conroy) is now a man, but growing up he was Laura, a “girlish boy” who never fitted into the small town or her father’s view of who she was expected to be. Mark has been away a long time and he is back with reluctance and great emotion to sit by his dying father’s bedside and deal with a life left behind and blacked out like tin foil on windows.

Alongside Mark, we meet his twin brother Gary (Will O’Connell) a gay businessman. He didn’t live up to Big Ted’s ideals either, but he has built a successful business and an international life, as far from the small town as it is possible to be. He too resents the strict and fierce upbringing that Big Ted gave the two children after their mother died giving birth to them.

There is a childhood trauma at the heart of the play, a vivid, violent memory that all 3 characters experienced from different perspectives, and it drives the story forward relentlessly until forgiveness can begin. Was this display of strength from Big Ted a threat, a punishment, a lesson or all three? How can any of us begin to unravel the complexities of our childhood memories and the individual moments we remember and polish as our own.

Luck Just Kissed You Hello is about what it means to be a man and the complicated nature and fluidity of masculinity.

“The best way to describe Amy Conroy’s new play  Luck Just Kissed You Hello for Hot for Theatre, co-produced by Galway International Arts Festival, is a family drama combined with a mystery. With the imminent death of a severe father, Big Ted Donovan, three figures convene in his hospital room to decide the fate of his remains and to piece together his eulogy. It’s an evocative juncture, imposing some shape on a painful past, reckoning with a deeply submerged childhood trauma while trying to determine the future.

Ted’s next of kin is at a similar crisis point: named in the will as his daughter Laura but standing here as Mark, who Conroy makes equal parts dauntless and defensive. Long estranged and recently transformed, Mark shares the room with his twin, Gary (Will O’Connell), a successful gay businessman, and Sullivan (Mark Fitzgerald), a blokeish, uncomplicated friend taken in by their father.” Peter Crawley, Irish Times.

Limerick to parttake in UNESCO Global Network meeting in China