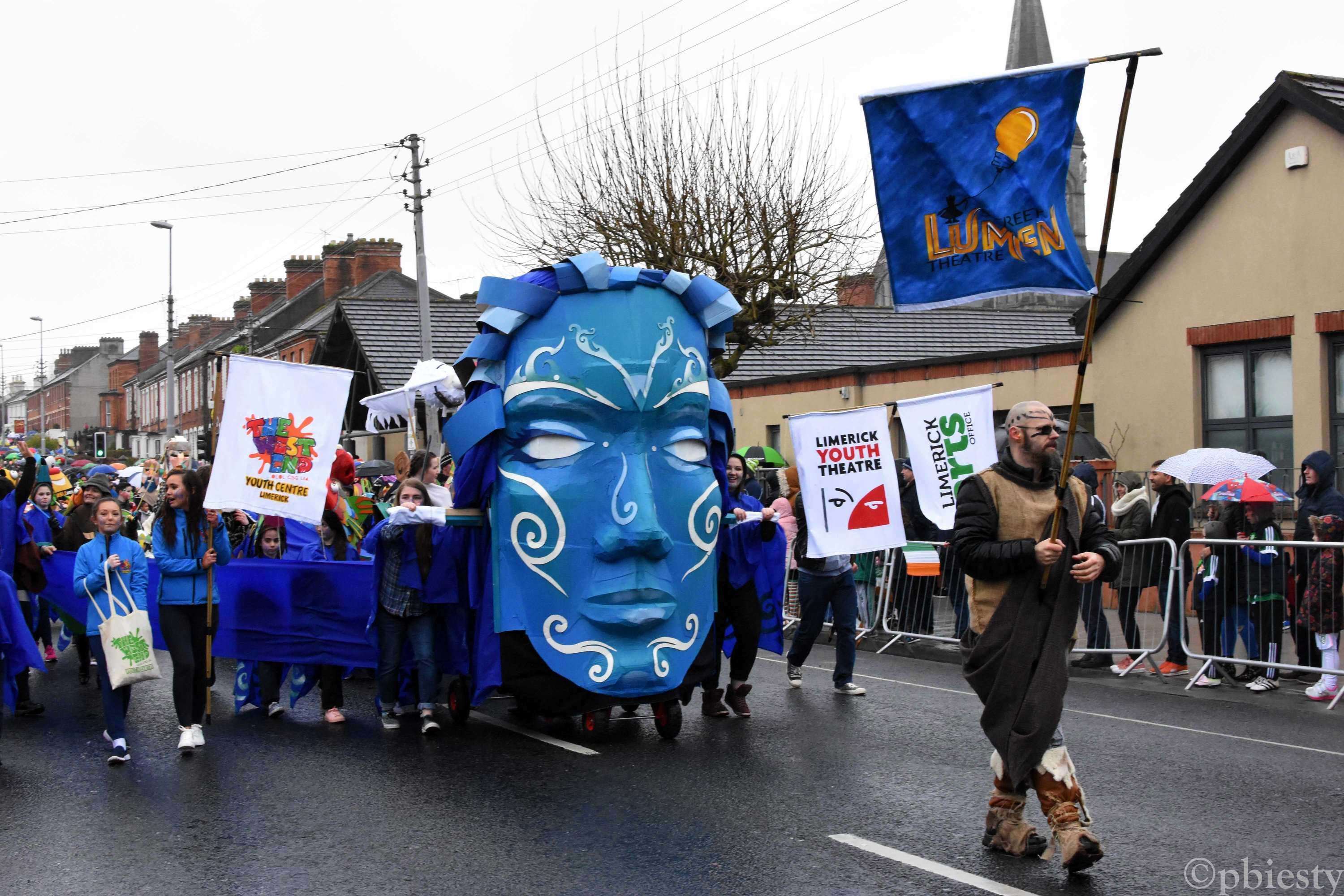 As a Street Theatre Company drawing on the rich and influential tradition of Limerick City’s own Umbrella Project, Lumen Street Theatre seeks to engage with the Limerick and its people by presenting scenes and performances that are visually spectacular, distinctive and inspiring within the setting of Limerick’s Urban Landscape.

The street theatre company was set up only a year ago by four highly creative professionals who put community and creative thought at the heart of everything they do.

Martin Shannon, Giordana Giache, James Ryan and Kate Hodmon are the founding members of Lumen Street Theatre and I had the chance to sit down with both Martin and Kate at Chez Le Fab Café last week to get a little bit of insight on what their organisation is all about.

All four of the core group had been heavily involved with parades in Limerick and Clare prior to starting Lumen Street Theatre, but at last years St. Patricks Day parade they decided to up the ante by making two joined Rubber Bandit backpack puppets and having the children from Westen Youth Club dress up as the Rubber Bandits also. The creative initiative got a great response from the public and that’s how Lumen came about.

“It was at that point we decided amongst the four of us, that there was enough of a gap there and a want in us to try and fill that gap to set up a street theatre company. We were passionate enough about what we do to be hungry for a few years to establish ourselves,” Martin Shannon commented on their starting off.

The name, Lumen, is in reference to the word illuminate, and founding member Kate Hodmon says the name reflects their hopes od “shining a light on the city and its communities”.

Lumen Street Theatre work with many youths orientated organisations such as Limerick Youth Theatre for their performances. Photo: Patrick Biesty.

Lumen Street Theatre then officially launched as an independent creative organisation at last years Culture night which takes place in September every year.

“We worked in collaboration with the Limerick Youth Theatre to put on a shadow play, we decided to do an adaptation of the Limerick poem ‘drunken Thady and the Bischops lady’”, Martin said.

The shadow play, Kate and Martin said, was different to usual shadow plays by being very interactive and humorous. They got the audience involved by using speech balloons and actors in the audience wearing large bobble heads and by allowing the audience to see behind the curtain after each scene.

Their aim behind getting involved with Limerick Pride this year is to start “building relationships with like minded people” in the hopes of being even more heavily involved with them in future Martin said.

A big thing for Lumen is to get the youths of Limerick and its surrounding area involved and engaged with creativity, so they work with the Limerick Youth Theatre and other youth orientated organisations for performances, and also hold a range of summer workshops and outreach programs for the youths of Limerick.

“It’s almost like a men’s shed for the kids. What we try to do is create a safe environment where they can talk about whats going on in their lives, and images to with positive mental health,” Martin said.

Lumen is currently looking for a location to be based at in the city, where they will be able to set up outreach programs and run classes to foster creativity in Limerick.

Much more can be expected from Lumen street Theatre this year as they plan to get involved in School spectacles, collaborate with Fidget Feet Limerick and are also working on organising a Halloween Festival that’s child-friendly and suitable for families, and of course next years St. Patrick’s Day Parade.

To find out more about Lumen Street Theatre click here