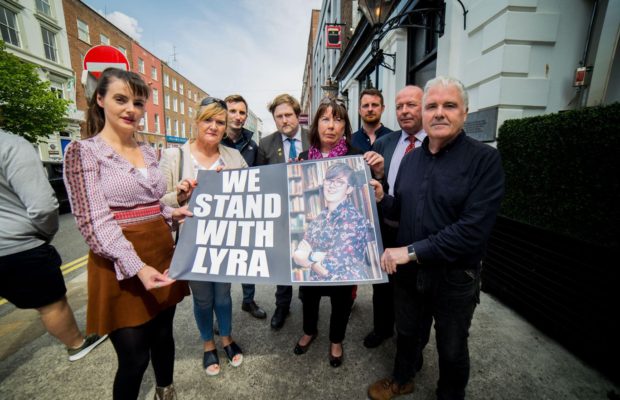 Journalist Lyra McKee tragically lost her life in Derry in the early hours of the morning on Good Friday, April 19. The talented 29-year-old reporter was fatally shot, by a group calling themselves the New IRA, during rioting in the Creggan area of Derry. The riot took place due to clashes between police and New IRA dissidents.

Members of the Limerick media gathered on O’Connell Street Tuesday, April 23 to remember Lyra and to stand up for justice. Norma Prendiville, Limerick Leader Reporter, was among the crowds on Tuesday. Norma said, “Lyra McKey was very clearly a young woman of great talent, I think she won her first journalism award at the age of 15 or 16. She was anti-sectarian and non-sectarian and stood for justice and I think that’s hugely important in the days we are here”.

The New IRA admitted responsibility for the murder in a statement given to The Irish News. They offered “full and sincere apologies” to Ms McKee’s family and friends, claiming: “We have instructed our volunteers to take the utmost care in future when engaging the enemy, and put in place measures to help ensure this.”

Norma concluded, “She stood up for the best in journalism which is to stand up for the truth, and always seek out the truth, no matter how difficult.”  We do remember her, her partner, her friends and our colleagues who are working in difficult conditions in the North of Ireland. We stand with Lyra and may she never be forgotten.”

An online Book of Condolence has been opened by the Mayor of the City and County of Limerick, Cllr James Collins for Lyra McKee. James said, “On behalf of the people of Limerick I would like to offer my condolences to the family and friends of Lyra.” The outpouring of grief and of revulsion at her murder just goes to show how important peace is to the ordinary people of Northern Ireland and that it won’t be hijacked by a group which has no standing moral or otherwise for communities across the country.”

The book will remain open for one week. The Mayor concluded, “I hope this attack will further galvanise those who long for lasting peace in Northern Ireland and put pressure on the political parties to work together for justice and peace.” As a mark of respect, I have instructed that an online book of condolence be opened by Limerick City and County Council.”

Lyra is being laid to rest today, Wednesday, April 24 in her home town in Belfast surrounded by family and loved ones. A donation can be made via a GoFundMe page set up by the National Union of Journalists.

The book of condolence can be accessed here