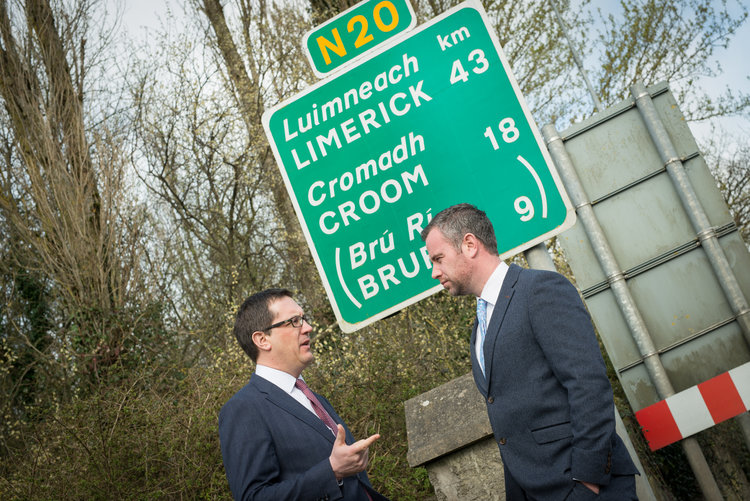 A socio-economic study on the impact of the most important piece of road infrastructure yet to be developed in the regions – the M20 from Cork to Limerick – is under way.

Cork and Limerick Chambers have jointly commissioned Indecon Economic Consultants and RedC Research to undertake a study into the benefits of the proposed 80km M20 Motorway.

In advance of the autumn 2017 mid-term review of the Infrastructure and Capital Investment Plan, the Chambers believe the M20 must take priority with additional funding and a clear timeline allocated towards the project.

When complete, the M20 would create a seamless Atlantic motorway corridor from Cork through Limerick and on to Galway, helping to create an economic complement to the east coast.

The original need to upgrade the N20 was identified as far back as 1998 and, according to the chambers, the road is now at capacity and posing safety concerns.  Transport Infrastructure Ireland, (formerly the National Roads Authority) had previously submitted the scheme to An Bord Pleanala in 2010, which was subsequently withdrawn due to financial constraints.

However, the Minister for Transport has since put the project back on the agenda and informed Transport Infrastructure Ireland that they may proceed with early activities at a cost of approximately €1million.

The report is due to be finalised in May and will be jointly presented to Government by the two Chambers with a view to seeing additional funding allocated towards the M20 in the Capital Plan.

Commenting on the need for M20 Conor Healy, CEO of Cork Chamber, said: “As we seek to plan for Ireland in the future the need for a motorway connection between Cork and Limerick cannot be ignored.  It is in the national interest that our regional economies expand for Ireland to remain competitive and to complement growth in the Capital Region which is can only be achieved through investment in infrastructure.”

In order to facilitate growth across Munster and the wider Atlantic Corridor, the cities of Cork and Limerick must be connected with a motorway fit for purpose to meet increasing traffic volumes from transport heavy industries along the M20 corridor and to enable new economic expansion. For too long regions in Ireland have thought about one another as competitors for growth. The time is right to take a collaborate approach to drive forward the potential of the Southern axis with benefits for all of Ireland, and we are delighted to be working with Limerick Chamber on this important project.”

Said Limerick Chamber CEO James Ring, “The M20 is probably the most significant piece of infrastructure yet to be developed in the State.  Current severe capacity constraints on the N20 are holding back the development of the region. This motorway would have a hugely beneficial impact on our city regions.  With the right road network linking them, they would effectively become one large labour and customer marketplace. It’s a game changer for the corridor and all the more important because of the looming uncertainty about Brexit. This would give us a real edge, allowing for lower transport costs, increased competition in the economy, tax benefits from increased labour supply and employment effects.

“The joint approach here by Limerick Chamber, together with Cork also signals a new and necessary approach to regional development.  By coming together, our cities and towns, together with Galway, are creating a dynamic and formidable Atlantic corridor that will be not just a counter pole to Dublin that helps to rebalance the national economy but an economic channel that will turn heads on an international stage.”