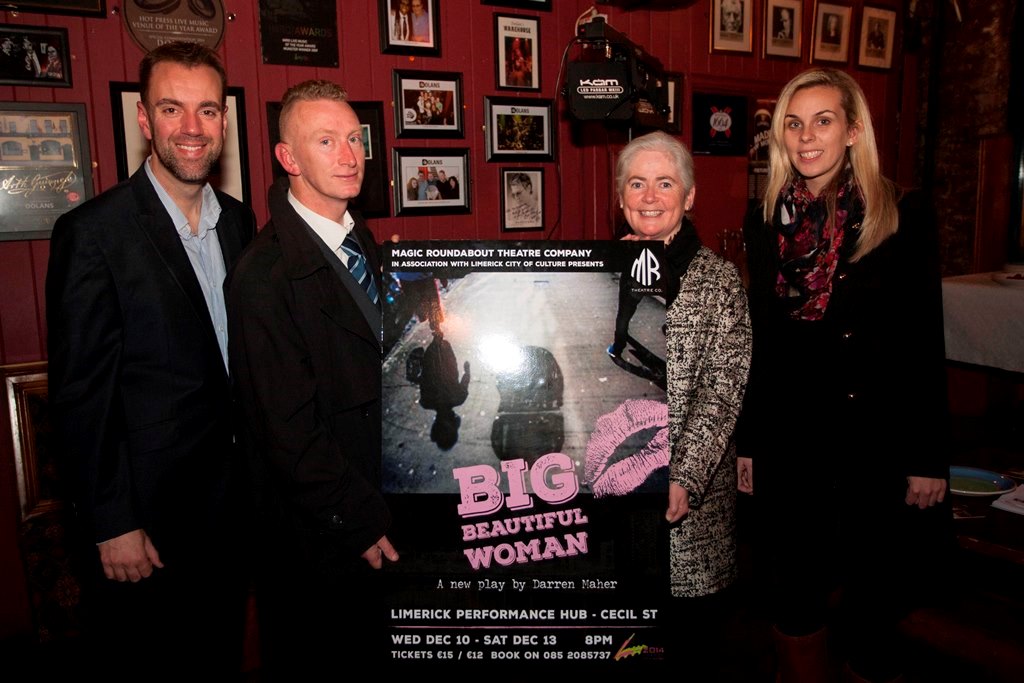 Magic Roundabout have Giant Ambitions for their Big Beautiful Woman

Magic Roundabout Theatre is one of Limerick’s most unique theatre companies, and have been producing innovative work in the city for the last 4 years. It’s only fitting that their offering for City of Culture, Big Beautiful Woman, debuts in the last month of the city’s tenure as it casts a reflective look back on one of the year’s highlights.

The Autumn visit of the Royal Deluxe Limerick Granny cast a giant shadow on the city, but left her indellible footprint on the hearts and minds of Limerick city.

This being theatre however, their newest play by writer Darren Maher presents a fictional pageantry company coming to town, and keeps the focus and action squarely on the play’s protagonists – two local artists who are trying to find a way to tell their own story, while working on a giant French spectacle that just happens to be going on in the background.

This brand new play, also directed by Maher, will be the company’s biggest production to date, having been generously supported by City of Culture. It will take place at the newly opened Limerick Theatre and Performance Hub on Cecil Street from December 10th to 13th and is one of the final productions of the ‘Made in Limerick’ strand of programming.

Big Beautiful Woman is an out and out comedy that will have audiences rolling in the aisles. A local story told with incredible verve by the playwright who who has assembled a top cast to bring it to life. Frances Healy – who is well known from her television and film roles (including The Magdalene Sisters) and Niamh Bowen (who worked regularly with the former Impact and Island theatre companies) are the two leading ladies. Joining them is up and coming young Limerick actor Jared Nadin who trained with Limerick Youth Theatre and has been seen with Bottom Dog and many other companies in the city.

One key element in the casting was the decision by Moore and Maher to cast actors who had worked with Royal Deluxe on their Limerick visit. This ensures that actors not only can approximate the experience, but draw directly on their own to bring a level of authenticity impossible to find elsewhere.

Being a city of culture project, Magic Roundabout have assembled a top creative team to support the production, with Bottom Dog producer Liam O’Brien coming on board to mange the project, Tara Doolan on stage mangement, Pius McGrath on lighting and Senan Moore on sound design. Zeb himself will be constructing a special set piece for the show which is still under wraps, but the trained engineer is well suited to employ both sides of his craft to create something special at the black box venue in Cecil Street.

Explaining the thought process behind the story, writer Darren Maher explained, “”A few of Limerick’s theatrical types got some work earlier this year with the visiting European company that had a Giant Marionette with them; that work was demanding & the situation quite confusing, but for many of us, it quickly became something wasn’t so much a job as a privilege. The play is, in a sense, a tribute to that feeling. The Big Beautiful Woman uses elements of that bizarre work environment (exaggerated for comedy effect) as a setting for what is essentially a discussion about Limerick, Theatre, History and what really matters. Also, in both French and English the language is authentically colourful, so don’t bring your kids. And pardon my french.””

Zeb Moore continued, “The wonderful thing about Limerick’s designation as City of Culture is that companies like ours, who have been plugging away, have now been facilitated to produce a large scale production like this which has previously not been possible. The generous funding provided by Limerick City of Culture and its supporters & sponsors allows us to bring a talented cast and crew of professionals together to create one of the final pieces of original theatre this year, and for that we are hugely grateful.”

Big Beautiful Woman runs from December 10th – December 13th at the Limerick Theatre and Performance Hub on Cecil Street.  To reserve tickets you can call or text 085 2085737 and are advised to do so with limited seating of 75 for the four nights. Tickets cost €15 (€12 concession) with all tickets on Wednesday’s preview only €10.

Magic Roundabout was founded in Dec 2009 when Zeb Moore performed Darren Maher’s Spinal Krapp for Limerick unFringed. Since then the show has returned and toured often. Other shows include a memorable performance of Two Gentlemen of Lebowski, David Mamet’s American Buffalo (which also toured to Dublin) and Maher’s The Maltese Falcon.

Check out the Magic Roundabout on their Facebook page here!
Read more about theatre in Limerick here!

Beautiful Dreamers a Conversation with a City