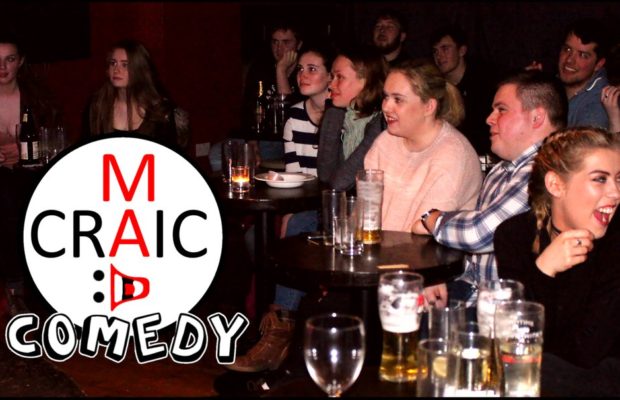 Mad Craic Comedy: Limerick is returning once more for a fun-filled night of stand-up comedy in the Pier Hotel on June 23!

Limerick city boasts a vibrant and hilarious comedy scene ranging from The Rubberbandits, regular Open Mic nights spotted throughout the city, and a number of active comedy clubs. With this in mind, it’s no wonder that we would host some of the best Irish comedy acts around in the Mad Craic Comedy night, with some of Ireland’s best up and coming comedians performing on the night.

Sean Nolan, 2013 RTE New Comedy Award Winner, has performed at the Laughter Lounge and was a support act for a gig in London with Sara Pascoe and Abandoman.

John Spillane is the hilarious 2015 Irish Student Comedian of the Year and the Standup Showdown Winner.

Stephanie Leonard who will also be at Mad Craic Comedy: Limerick is a Show Me the Funny finalist 2015, Tedfest finalist in both 2015 and 2017, and supported Kevin McAleer and John Clark at one of their performances.

Finally, Duffy Connors, a runner-up in Comedian of the Galway Fringe 2017, will also take to the stage.

The MC for the night will be Gavin McClure. Best of the Irish at the Galway Fringe 2016, a Show Me the Funny finalist in 2017, and a Forbidden Fruit Finalist 2017, there’s no better man for the job!

The evening is not to be missed, promising to be an interesting mix of surrealism, observational wit and general craic with many acclaimed comedians taking to the stage.

With excellent reviews from previous shows, it’s no wonder this is a night be remembered!

Doors open at 8.30 for a 9.15 start at the Pier Hotel, Limerick. Tickets cost €6 when bought online, otherwise, they are €8 on the door. Groups of five people or more will cost €4 per ticket.