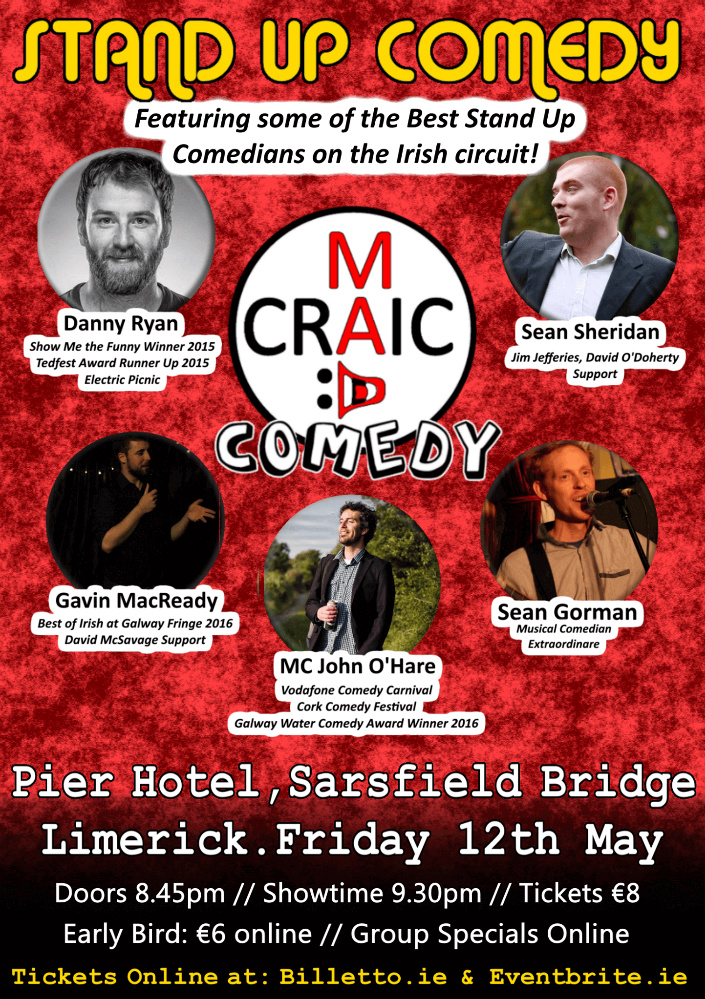 Limerick city boasts a vibrant and hilarious comedy scene ranging from The Rubberbandits, regular Open Mic nights spotted throughout the city, and a number of active comedy clubs. With this in mind it’s no wonder that we would host some of the best Irish comedy acts around in the Mad Craic Comedy night! Check out a fantastic night of stand-up comedy on Friday, May 12 as Mad Craic Comedy will be taking their show to the Pier Hotel, Sarsfield Bridge, Limerick.

The show will be an interesting mix of surrealism, observational wit and general craic with many acclaimed comedians taking to the stage.

Headlining the Mad Craic Comedy night is Limerick’s very own funny man Danny Ryan. Danny’s subtle mix of the surreal with the mundane has made him one of the best emerging comedians on the circuit and won him the Show Me The Funny Competition 2015, was runner up in the TedFest Comedy Competition and has performed at Electric Picnic and numerous other festivals.

Joining him on the night is Sean Sheridan who has described himself via twitter as “comedian, podcaster and reformed reprobate”. Sean has supported big names such as Jim Jefferies and David O’Doherty, musical comedian extraordinaire Sean Gorman and Gavin McCready. Gavin is a Finalist in the Forbidden Fruit Comedy Competition and recently shared the stage with David McSavage.

The gig will be MC’ed by John O’Hare, who has performed at the Vodafone Comedy Carnival, Cork Comedy Festival and won the 2016 Galway Water Comedy Award at the Galway Fringe.

Doors open at 8.45pm for a 9.30pm start. Tickets are €6 online, €8 at the door. Group tickets can also be purchased on Eventbrite and Billetto.