By Richard Lynch on September 24, 2019@richanthon 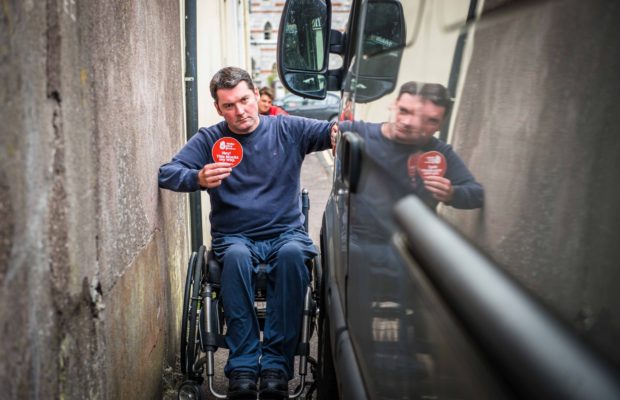 Make Way Day 2019: Ben Coughlan from Blackrock, Cork highlighting Make Way Day, September 26th, a campaign led by the Disability Federation of Ireland, where people with disabilities can get out on the 26th ‘stickering’ the common obstacles that block their way.
Photo Joleen Cronin

Limerick City and County Council is encouraging everyone to be more considerate when parking vehicles or bikes, or forgetting to remove wheelie bins from Limerick streets as part of Make Way Day 2019 on September 26.

Limerick City and County Council will support local disabilities groups as they hit the streets on Thursday September 26 with reminders not to; park illegally on the street, forget your bins, use of illegal sandwich boards, or the act of carelessly parking bikes on the street

People with disabilities have told the campaign leaders, the Disability Federation of Ireland (DFI) these are the top three obstacles that stop them from getting from A to B.

On Thursday September 26, members of the public are being encouraged to draw attention to the challenges posed by everyday obstructions within their towns and villages.

Disability Federation Ireland is inviting the public to take pictures of obstacles encountered (parked cars on footpaths, bikes chained to railings, sandwich boards and overhanging branches) and to post pictures to social media. Include #makewayday #makewayLimerick and to tag @makewayday and @disabilityfed in the post.

Groups will be gathering at Limerick City and County Council’s offices at Merchant’s Quay on Thursday morning before setting off on selected routes recording where access is an issue.

Michael Sheahan, Councilor and Mayor of the City and County of Limerick said, “I’m delighted that Limerick City and County Council is supporting Make Way Day for the second year. Everyone has a right to travel along our footpaths and get from A to B with unnecessary obstacles being put in their way. Somethings it a lack of awareness on behalf of people that obstacles there.  I am appealing to individuals and businesses to think about where they are parking their car, leaving rubbish out to be collected. We can all do our bit to help.”

Aoibhe Reidy, Access Officer with Limerick City and County Council said, “By making small changes we can all make a big difference to the lives of our fellow citizens. In Limerick 15% of the population of Limerick, or 29,228 people have at least one disability and Limerick City and County Council is delighted once again this year to support Make Way. It will be interesting to see the responses we get from the groups following their experiences on their selected routes on Thursday.”

Clare Cronin, DFI spokesperson said, “It’s a lack of awareness that leads to these obstacles and once people are aware we find they’re willing to help, but for the small minority who need it, we are delighted this year to have the backing of the Roads Policing Unit of An Garda Síochána.”