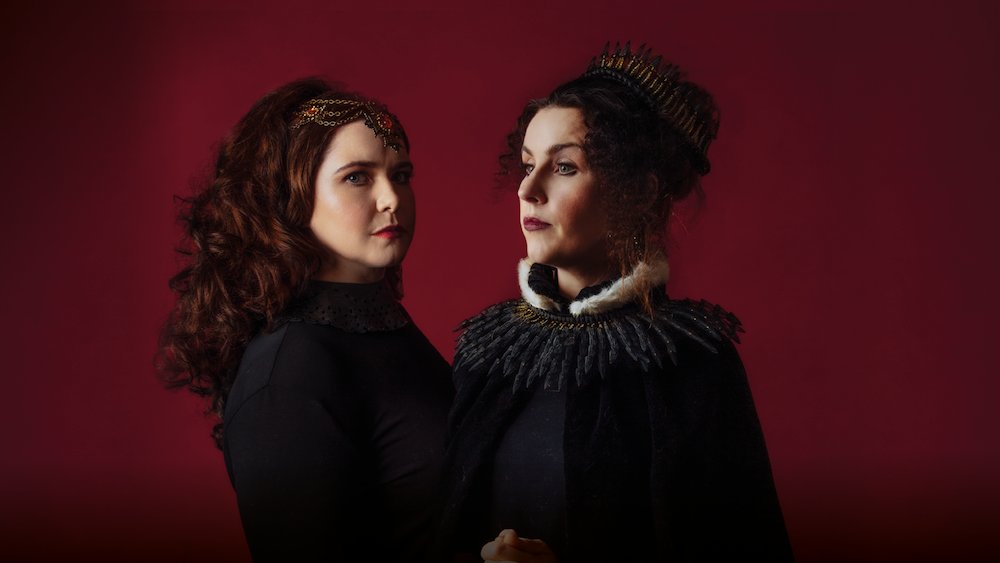 Donizetti: A Clash of Queens, One Catholic, One Protestant

The leading roles of the rival queens are taken by two Irish singers at the top of their form. Mezzo-soprano Tara Erraught, as Maria Stuarda herself, returns from starring in the title role of Massenet’s Cendrillon at the Opéra Bastille in Paris. Soprano Anna Devin, as Elisabetta, is currently engaged in performances of Handel’s Amadigi in Barcelona and Madrid, followed by a Stabat Mater through the ages tour with B’Rock Orchestra in Antwerp, Rouen and Gent.

The production reunites the director/designer team of Tom Creed and Katie Davenport, whose first INO collaboration on Offenbach’s The Tales of Hoffmann in 2019 netted two nominations in The Irish Times Irish Theatre Awards, one for best opera, the other for best costumes.

INO artistic director Fergus Sheil, who conducts the production, says that what draws him to the work is “the presence of two towering and equally powerful characters – Mary Queen of Scots and Queen Elizabeth I of England. Both are regal, powerful, ruthless, charismatic and temperamental and yet both also harbour insecurities, doubts and human frailties. Two formidable queens that are cousins, rivals and ultimately enemies. Something of this scale is brilliantly suited to bel canto operas, where the duelling personalities of the two queens find endless scope in the opera’s soaring melodies, driving rhythms and gyrating vocal lines.”

“I fell under the spell of this opera,” he adds, “when I worked on it as chorus master at the 2001 Edinburgh International Festival, and I’ve harboured an ambition to bring it to the stage in Ireland ever since. But not until now have I found the right two queens available at the same time. Tara Erraught and Anna Devin both have the vocal brilliance and elegance for these imposing roles, not to mind their steely determination and charisma. I’m hoping they will behave themselves in rehearsals, but I expect sparks to fly in all directions in the performances.”

Also in the cast are Filipino-American tenor Arthur Espiritu as Roberto, the Earl of Leicester (advisor to Elisabetta but in love with Maria), Irish mezzo-soprano Gemma Ní Bhriain as Maria’s companion Anna Kennedy, Italian baritone Giorgio Caoduro as Lord Guglielmo Cecil, the Chancellor of the Exchequer, and English bass CallumThorpe as Giorgio Talbot, the Earl of Shrewsbury.

The opera, with a libretto by Giuseppe Bardari, is based on German playwright Friedrich Schiller’s 1800 play, which posits a meeting between the two queens. This has no historical basis. But it serves to wind up drama and tension between the characters.

Donizetti’s opera had a troubled genesis. It ran into royal resistance in Naples and censors banned it before the planned opening night in 1834. The composer was then obliged to adapt the work to a new, non-offensive libretto, and it was then performed as Buondelmonte. When it was presented as Maria Stuarda again, it ran into censorship problems in Milan in 1835. After disappearing from opera houses for nearly a century, it was revived in 1958 in a version based on a spurious score that was created in 1865, 17 years after the composer’s death. The work’s fortunes have been greatly helped since the discovery of an autograph manuscript in the 1980s that made a critical edition of the score possible. The first Irish performance, with piano accompaniment only, was given by Opera Northern Ireland at the Down Leisure Centre in Downpatrick, Co. Down on Saturday 22 April 1989. INO’s new production is the first to be given in Ireland with full orchestra and chorus.

For tickets to Donizetti, go HERE