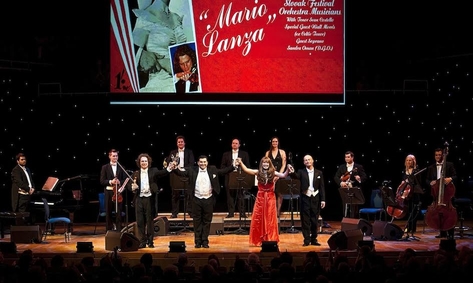 The Loveliest Night of the Year celebrates the 57th Anniversary of the death of Mario Lanza.

When The Loveliest Night of the Year – A Tribute To Mario Lanza first performed at Cork Opera House, Dublin’s NCH and Limerick’s University Concert Hall all 3 nights sold out.  On the last night another date was announced from the National Concert Hall stage and the following day 800 tickets were already sold for the newly announced date.  Only days later that concert also sold out. And again another date was announced and that too sold out. In fact, there have been an incredible 10 sold out shows in the NCH alone.  Such is the popularity of Mario Lanza 57 years after his death.  This is a very special concert.

Mario Lanza was the greatest voice of the 20th Century.  He is famous for singing such arias as the love duet from “Othello”.  His movies include,“That Midnight Kiss” “The Toast of New Orleans”, and his greatest film success “The Great Caruso” made him world famous. “Lanza Fever” swept the whole of America with his “Caruso Concert Tour”.  This great Celebration Concert Tour will feature all of his greatest hits.

Vladimir Jablokov performs and conducts the Slovak Festival Orchestra Musicians. He has been playing violin since he was five and is the fourth generation of his family to make music his career. He has performed regularly with his family on concert stages in Slovakia, Austria, Poland, Czech Republic, Hungary, Germany, Ireland and Italy.

The show features three fantastic Irish vocalists. The Galway Tenor Sean Costello takes on the role of Mario Lanza and makes it his own. He is ably joined by Baritone Frank Naughton and the stunning Soprano star of Opera Ireland Sandra Oman.