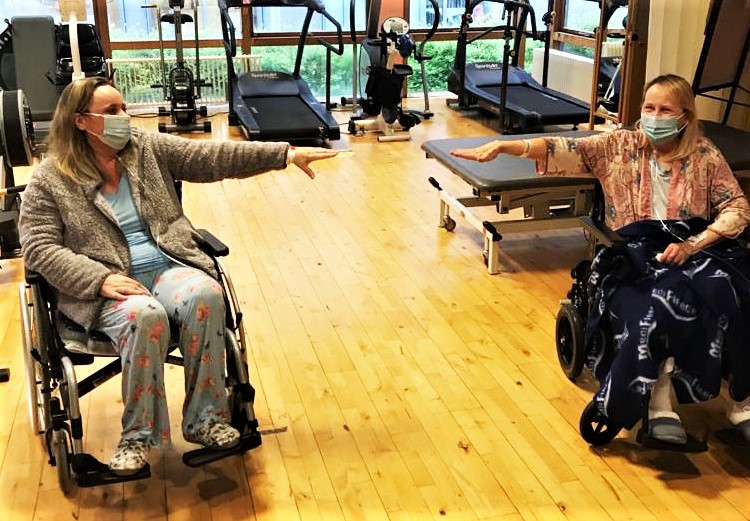 Mary Fitzgerald (right) and her daughter Jackie Fitzgerald (left) in the gymnasium at UHL in April 2021. Pre-vaccination, the mother and daughter had not seen each other for four months, having been separated by their respective battles with COVID-19.

IN THE late Spring of 2021, at a time of recovery and emotional family reunions across the land, University Hospital Limerick (UHL) was the scene of one particularly happy get-together for a County Limerick mother Mary Fitzgerald and daughter Jackie who were separated from one another for four months during their long battles with COVID-19.

Croom woman Jackie Fitzgerald (47) was infected with COVID-19 during the third wave in early January 2021, and was admitted to the Intensive Care Unit (ICU) at UHL. She was discharged from critical care at the end of April, having suffered through respiratory failure, double pneumonia and sepsis.

However, there was a long road to travel for Jackie and her family, even at that point. Discharged from UHL in early May, Jackie finally left rehabilitation in St Ita’s, Newcastle West, on Thursday July 15, a full 190 days after her initial admission to UHL.

There have been numerous surprises for Jackie during her recovery. It was only when she was discharged from UHL that she discovered her mother, Mary Fitzgerald, had also been through a number of admissions to UHL with serious chest infections since the start of the year, including a period in the hospital’s High Dependency Unit (HDU) for treatment of COVID-19.

Restrictions on access to UHL meant that throughout this long period of critical illnesses and high dependency treatment, Jackie was separated not only from her mother, but also her own family – husband Pat and daughters Sarah, Lisa and Ciara.

Jackie’s sudden hospitalisation was devastating for her daughters and Pat, she recalled. “They were devastated. Visiting was very restricted but during some of my most critical times my husband was left in to visit, all right,” Jackie explains. “The family were told at one stage on a Thursday in the middle of March that if I was still there on the Saturday, it would be a miracle. But I’m here to tell the tale,” Jackie said.

“Mam was in and out of hospital over this same time,” Jackie revealed. “She’d had a serious illness the previous January, and then this year, she got COVID-19 in the other lung, so she has been battling since with chest infections. You can imagine my surprise when I discovered she had been in the same hospital as me when I was so seriously ill.”

Jackie recalled the special moment in early May when she finally got to within almost touching distance of her mother in the hospital gymnasium: “Oh my God, it was unbelievable… unbelievable,” she said. “I wouldn’t be able to put it into words. It was just fantastic.”

“It would have been huge for mam as well. During the time I was sick, and mam wasn’t sick, she still wasn’t allowed to visit me, because she was in the ‘high risk’ category. So even though my family was told that I was not expected to survive, mam still wasn’t able to come in to see me,” she said.

The reunion was an emotional moment for the two Limerick women. “We were thrilled,” Jackie revealed. “There were tears: tears of joy.”

Preparing to leave hospital in late May, Jackie was aware of the long road ahead to full recovery from her COVID-19 illness. Now finally discharged from St Ita’s (where she was joined for a time by mother Mary Fitzgerald, who is now also doing well), Jackie ponders how she will adjust her lifestyle to her recovery from COVID-19. “I’m the eldest of six, the one who usually looks after things within the family but that role has now passed to my younger sisters. I’ve only temporarily passed on that role – I’ll be back,” she laughed.

Despite her good humour, and relief to be in recovery—“my body, my brain, everything is ready, except for my lungs. It’s a long recovery and I will need ongoing physio for my lungs, because it wasn’t looking good for them, to be honest”—Jackie is acutely aware of the continued threat that COVID-19 still presents, to her, her mother, and the rest of her family.

Jackie urges the public to continue to take seriously the still very real threat of COVID-19, and to get vaccinated against the disease.

“It’s so, so serious. I mean, there are people who think this isn’t real, and I think a trip to ICU would definitely open their eyes. I would definitely be urging people to get the vaccine. Anyone who isn’t vaccinated won’t be coming anywhere near me, anyway. And that’s a fact, because I’m lucky to be here, you know?”