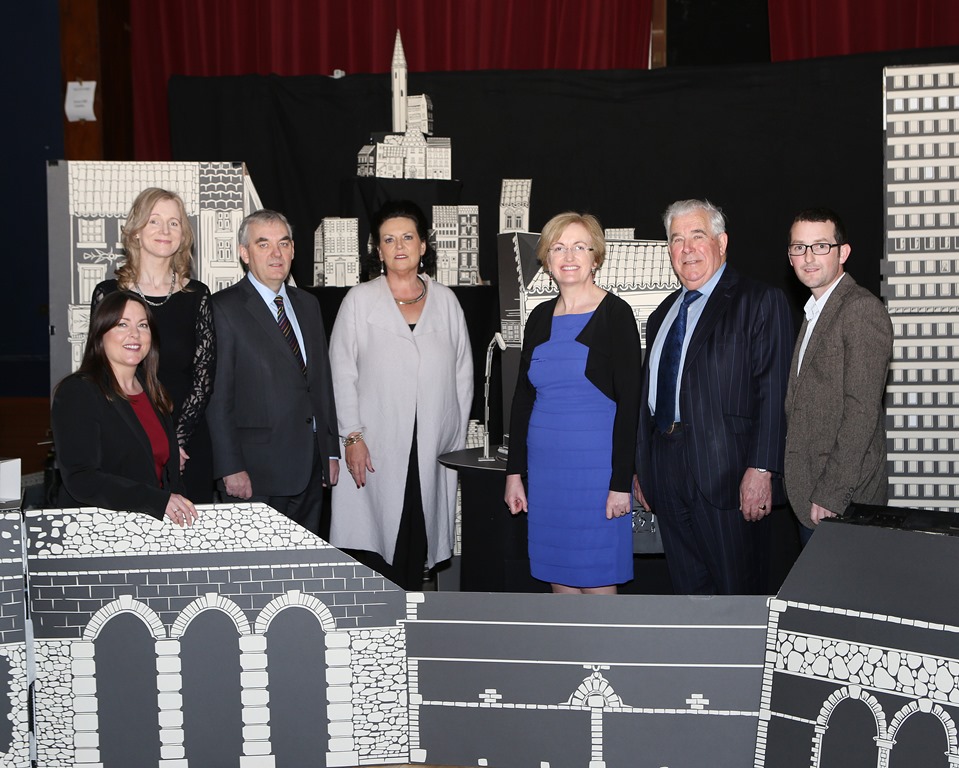 There is a public shift in Ireland towards young people, one that realises that young people have a cultural entitlement to arts-in-education, according to Professor John Coolahan, Professor Emeritus of Education from the National University of Ireland, Maynooth and Chair of the Arts-in-Education Implementation group who was speaking at an Artists-In-Residence in Higher Education symposium in Mary Immaculate College (MIC) Limerick, on Tuesday 24th March.

The symposium, entitled Artbeat, showcased the innovative work of the two Artists-in-Residence at MIC (Branar, Téatar do Pháistí and composer, Anne-Marie O’Farrell) in addition to cultivating dialogue around issues that pertain to the role of the arts in society and in particular to children’s lives.

Welcoming everyone to the symposium, Prof. Michael A Hayes, President of MIC, said “Mary Immaculate College has a long and valued tradition of excellence in the arts.  The arts are an integral part of the life of the College both as academic pursuits within programmes, and as a means to engage students as an extracurricular engagement.   The arts in higher education support community development, social cohesion and cultural understanding. This is to the forefront of MIC’s Mission statement”.

The Charter for the Arts in Education, published January 2013, notes that arts provision for children and young people in and out of school is a challenge in Ireland’s cultural landscape but it also believes in placing the arts, alongside other subjects, at the core of the education system.  To that end the Charter places new responsibilities on Government Departments, agencies, cultural institutions and arts organisations in terms of providing and promoting arts education to children and young people.

Delivering the key note speech Professor John Coolahan, said; “The Charter for the Arts in Education is reflective of a changing policy context which, when aligned with a new sense of collaboration and momentum by a range of arts/education agencies, and strategic investments in arts/education initiatives by the Arts Council and others, betokens a new developmental era for the arts in education, with immense potential benefit for generations of young Irish citizens”.

Prof. Coolahan has lectured extensively in Ireland and abroad, is author of three books and has published over 120 articles in Irish and international journals. He was a founding member and President of the Educational Studies Association of Ireland, and was editor of Irish Educational Studies. At international level, Prof. Coolahan was leader or member of OECD Review Teams of Education in ten countries, on four continents; Vice-president of the EU Committee on Education (1995-99); Consultant to the World Bank and the Council of Europe; member of the Review Body on Education in Northern Ireland (2001-02); and the co-founder and co-chairman of the standing conference on Teacher Education, North and South (2000-2008); Chairman and Rapporteur for the National Forum on School Patronage and Pluralism in 2010/11. Prof. Coolahan has combined his interest in theatre with his education career through engagement with TEAM, Theatre in Education Company;  with the Ark Cultural Centre for Children where he is a Board member and currently through his Chairing of the Implementation Board of the Arts-in-Education Charter.

Looking towards a new era for arts in education Prof. Coolahan said that artists-in-residences in higher education settings  were ‘a yeasting force’, acting as a catalysts by having a long term impact on the students they work with who in turn impress on the thousands of young people in our primary schools.

Seona Ní Bhriain, Head of Young People, Children and Education with the Arts Council, noted that it was significant that this timely symposium was being hosted by MIC as the College had also played host to the very significant Creating Conversations colloquium in 2010.  The Creating Conversations colloquium was held in response to the Points of Alignment report with a view to debate the role of the 3rd level sector, especially teacher education, in further developing the arts and education community and practices.  That colloquium, coupled with the Encountering the Arts conference and the Art Council’s event Art-Youth-Culture:FYI ,both of which took place in 2010, have since been credited with bringing the topic of arts in education to the fore front of public debate.

Speaking on the residencies Seona Ní Bhriain informed those attending the symposium that the Arts Council currently supports six residencies in higher education settings, two of them at MIC. “Our hope is that as each new teacher comes through college, they will cultivate their own creativity and passion for the arts, so that they may bring this to their own creative role as a teacher”.  Continuing she said “The teacher may make their classroom a place where children’s imaginations are nurtured, but the teacher will also play an important role as facilitator of artistic experiences for their students – drawing on the artists and the full range of cultural resources in their communities”.

Drama lecturer and co-organiser of the symposium, Margaret O’Keeffe echoed these sentiments saying that the residencies “provided pre-service teachers with an opportunity to engage with the arts and breakdown the barriers between what is perceived as art and what is perceived as an artist”.  She continued saying that the residencies allows the pre-service teacher to find the ‘teacher artist voice within’ so that they in turn will “enable, foster and develop the artistic voice within the child in the context of the classroom”.

Also speaking at the event were the MIC artists in residence who reflected on their experiences with composer Annemarie O’Farrell saying that “it was very enjoyable to connect with the musical heritage of the College, a very stimulating experience as an artist”.  Whilst Marc Mac Lochlainn, Artistic Director of Branar, Téatar do Pháistí, summed it perfectly saying that the “Artist-in-residency at Mary Immaculate College is the Arts in Education Charter in action”.

Louise Donlon, Manager of the Lime Tree Theatre, the on campus theatre venue who co-host the residencies with MIC, said; “Through the Artists-in-Residences the Lime Tree Theatre has seen an expansion to its programme that adds enormously to what the theatre can offer young audiences, both in the context of school and family visits.  The consistency and quality of programme associated with these residencies is key to meaningful audience engagement with work”.

Dr. Kate Sweeney, National Director for the Integration of the Arts in Education, Dept of Education & Skills, announced details at the symposium on the forthcoming Arts in Education portal, which aims to be the key national digital resource of arts and education practice in Ireland, and will be launched on May 19th in Dublin Castle.  The mission of the portal, according to Dr. Sweeney is to ‘provide a platform through which good collaborative practice in arts-in-education and arts education will be supported, developed and enhanced”.

Branar, established in 2001, is a theatre company dedicated to producing high quality bilingual shows for young audiences. It is particularly noted for its distinctive use of hand-held puppets and its vivid physical style. Branar’s residence, which commenced in the Autumn of 2013, sees the company’s Artistic Director, Marc Mac Lochlainn, leading workshops for students in drama education classes, in Irish classes and with members of student societies. In addition the company, in association with the Lime Tree Theatre, has delivered a series of workshops for younger children as part of the residency programme.

The primary purpose of the composer residency programme is to enliven the musical culture of the MIC campus, and to allow practicing artists to feed into the educational programmes and work of the institution. Following an open competition, which took in early 2014, renowned musician Anne Maire O’Farrell was appointed MIC Composer-in-Residence in April. Since the residency began in April 2014 Anne-Marie has been busy leading workshops for students in music education classes at undergraduate and postgraduate level.

Dochas (Hope for People with Autism)