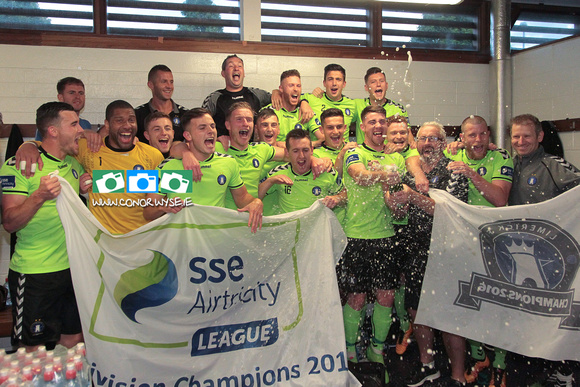 The Mayor of the City and County of Limerick, Cllr Kieran O’Hanlon has congratulated Limerick FC soccer club on winning the SSE Airtricity First Division League and gaining promotion to the top-tier of domestic soccer.

The Limerick FC side has spent just one year in the SSE Airtricity First Division League after being relegated in the previous season. Their return to the top flight was made easier by an impressive goal-scoring tally which saw the team average over 3 goals per league game as they went on to win the division with six games left to play.

“It’s a fantastic achievement to return to the Premier Division just one year after being relegated, but the manner in which Limerick FC has achieved the feat is a credit to the players and management,” he said.

The Limerick side clinched the first division title with a 3-2 win over their hosts UCD at Bellfield on Sunday, August 28. A goal from John O’Flynn helped Limerick FC back from an early UCD lead and a brace from Paul O’Conor helped send the Blues to the top tear of SSE Airtricity League.

“The dedication of the players and management teams, both on and off the pitch, show what can be achieved when we put our minds to it.  We were all disappointed when ‘The Great Escape’ ended in disappointment in Donegal last year, but the dedication and commitment shown by all in Limerick FC when this season started in March, has resulted in the team claiming the First Division title and gaining promotion with six games to go,” he added.

“Limerick FC has breathed life back into the Markets Field since their return, and hopefully next year and in the years to come there will be more glory days,” The Mayor concluded.

Support the Limerick FC division title win when they take on Waterford United this Saturday, Sep 3 at markets field from 6.30 pm.

You can find more information on Limerick FC here.
Here you can read more stories related to Limerick FC.