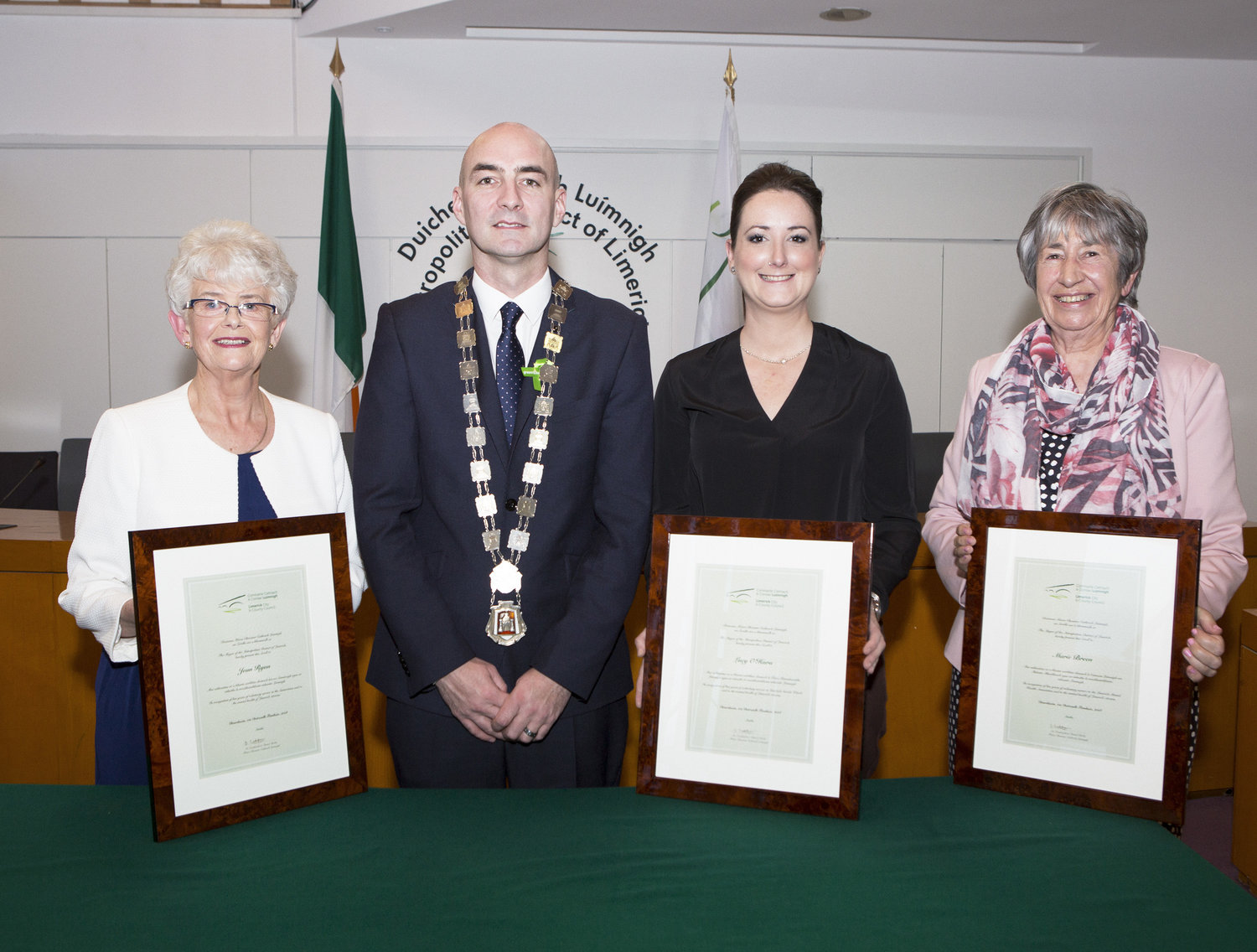 Jean Ryan, Lucy O’Hara, and Marie Breen were awarded by a Mayoral Reception by the Mayor of the Metropolitan District of Limerick Cllr Daniel Butler for their voluntary work. Picture: Liam Burke, Press 22.

Jean Ryan, Marie Breen, and Lucy O’Hara became recipients of a Mayoral reception. They were honoured for their unending passion and hard work in supporting associations such as the Samaritans, Limerick Suicide Watch and the Limerick Mental Health Association.

Flag bearers of voluntary work, these women have in their respective concerns earned a name for their hard work.

Heading the reception Mayor of the Metropolitan District of Limerick Cllr Daniel Butler began by congratulating the three women. As Mayor, instead of introducing the women himself Cllr Daniel Butler chose to invite upon colleagues of these women to talk about them.

Colm O’Byrne, Chairman of Limerick Suicide Watch stepped up first to talk about his colleague and dear friend Lucy O’Hara.

Lucy O’Hara has spent years in providing her voluntary services to Limerick Suicide Watch and to the mental health of Limerick citizens.

“Our own Lucy O’Hara is one of the three being recognized tonight. She has received this award for her hard-work not just to LSW but to Mental Health Awareness in general. One thing I’ve learned is that you never say no to Lucy, her enthusiasm drives her greatly so much so that people don’t tend to say no to her,” Mr. O’Byrne said.

Jean Ryan, known for her patience and years of devotion in managing the voluntary services at the Samaritans was the awarded for her efforts at the reception.

Jean manages the weekly Rota at the Samaritans branch, a tough job indeed as it is important to have volunteers available at all hours. Yet, despite the stressful nature of her job Jean manages to maintain humour and enthusiasm to keep moving forward.

Marie Breen was also recognized for her years of hard work, in particular towards the Limerick Mental Health Association and played a key role in raising awareness about the Mental Health of Limerick citizens.

All three women were thanked by the mayor and their efforts celebrated among an audience of family members and well-wishers.