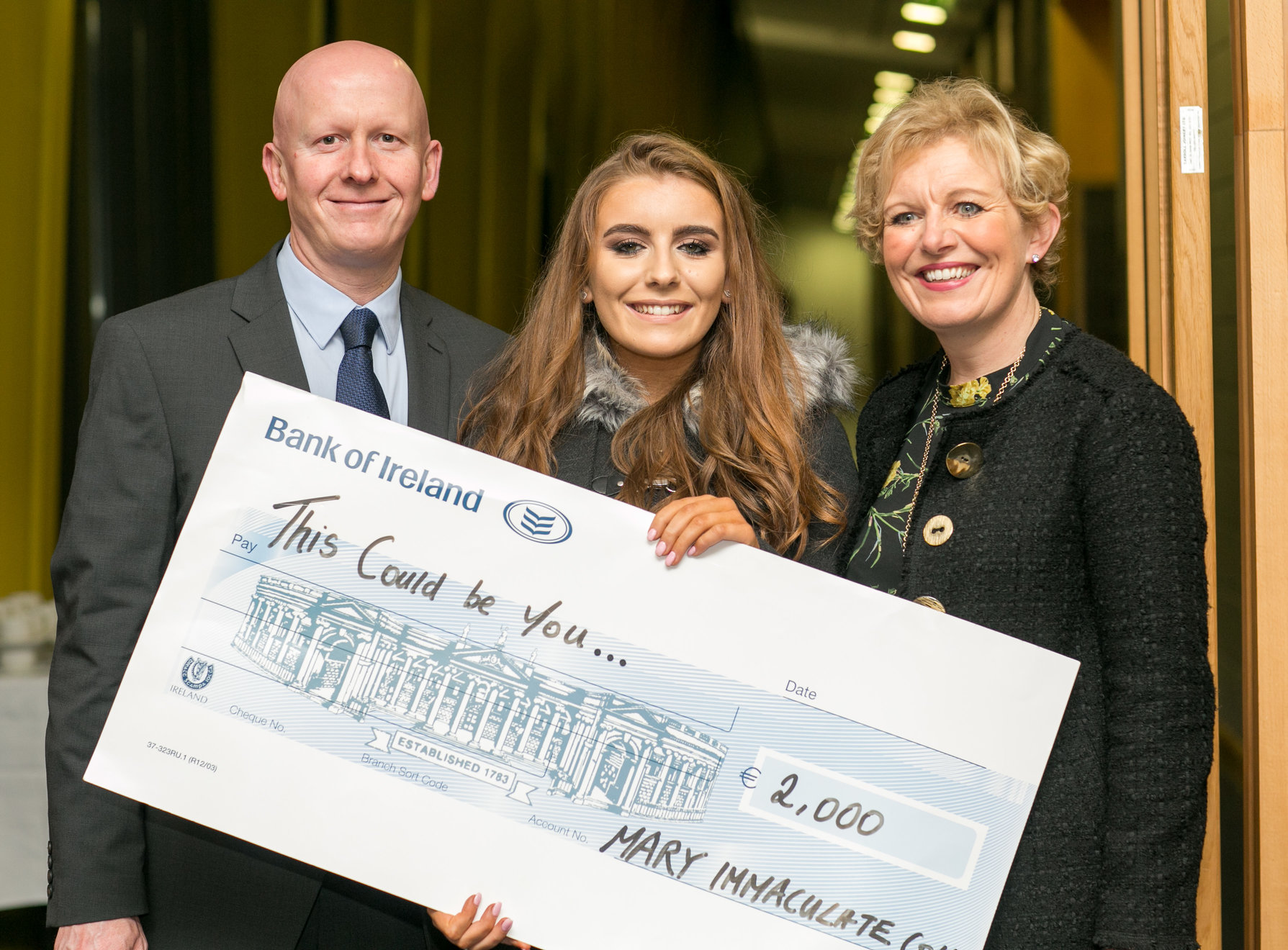 Pictured at the recent MIC Awards 2017 was Emma O’Reilly with her parents Eoin and Suzanne O’Reilly from Fr Russell Road, Limerick who received an Undergraduate Entrance Scholarship to the Bachelor of Arts at MIC.The scholarship, valued at €2,000, was awarded on the basis of CAO points obtained in the Leaving Certificate Examination. Pic Arthur Ellis/Press 22.

Tuesday 21 November saw over 100 students and graduates from Mary Immaculate College being recognised for their academic and other notable achievements at the MIC Awards 2017.Over €100,000 was presented in scholarships and bursaries, further enhancing the recipient’s studies at MIC.

The prestigious MIC Awards 2017 event also included the inaugural MIC Alumna of the Year Award, presented to Mrs. Carmel Naughton in recognition of her outstanding contribution to society.

A graduate of MIC Mrs. Naughton is a former Chairman of the Board of Co-operation Ireland. Together with her husband, Martin Naughton – founder of Glen Dimplex Ireland – she has been a constant advocate for the advancement of educational opportunities, particularly in the arts, as well as in the disciplines of science, engineering and mathematics where the couple have actively promoted excellence in technological studies at higher level in Ireland through the Naughton Foundation, which they established in 1994. In 2016, the Community Foundation for Ireland named the couple National Philanthropists of the Year for their work in the Naughton Foundation.

Presenting the award Professor Eugene Wall, President (Acting) of MIC said “Values, such as ‘commitment to community’ and ‘service to others’, lie at the heart of, and are embedded in, our College Mission Statement. In the context of this Mission Statement, we all seek to make a difference for the better. We understand that such a vision can be expressed in individual contributions and we recognise the profound influence that can be exerted by a single person. The achievement of one remarkable individual who has made an outstanding contribution to Irish society is what we are recognising this evening and we are proud to present this award later this evening to Dr. Carmel Naughton.

We, at Mary Immaculate College, have been inspired by Dr. Carmel Naughton’s work and her extraordinary capacity for making a difference.   We are delighted and honoured therefore that she has accepted the inaugural MIC Alumna Award”.

On accepting the award Mrs. Naughton spoke to the students at the MIC Awards 2017 present saying “You are well into the composition of your own lives.  Each of you will approach the future in your own way, following your own inspiration and shaped by the particular influences and circumstances. The music will be distinctly yours; all I can counsel is that you bring the maximum passion and commitment to the task”.

Other awards presented at the MIC Awards 2017 included 50 Undergraduate Entrance Scholarships to MIC nine undergraduate programmes.  The scholarships valued at €100,000 were awarded to MIC students who obtained the highest CAO points in 2017. The event also saw the inaugural MIC Foundation Bursaries, valued at €1250 which were presented by Páidí Ó Lionáird, TV presenter and Chair of MIC Foundation to Ciara Daly from Cahersiveen, Co Kerry and Keith Ryan from Crecora, Co. Limerick. 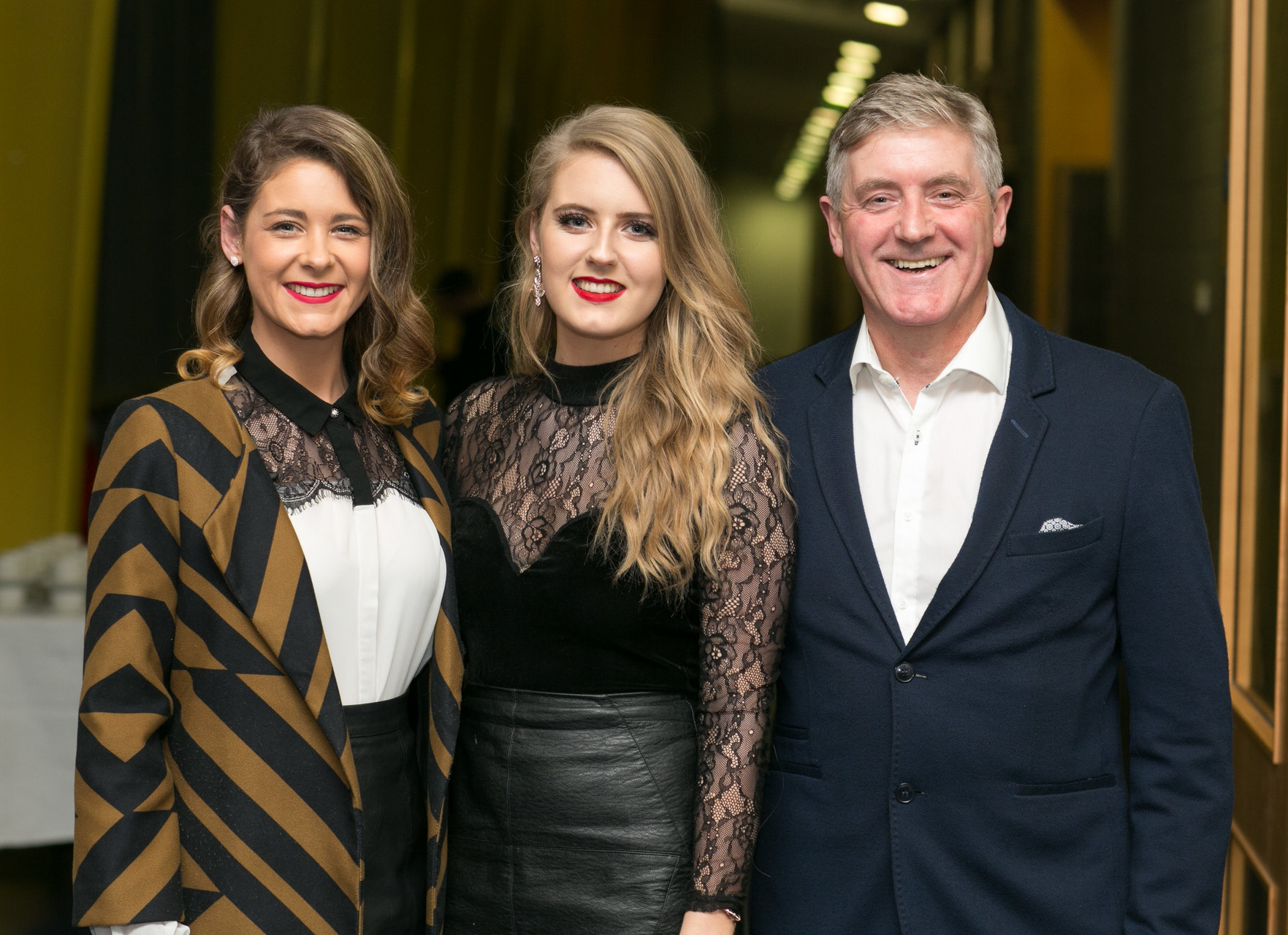 Another first was the inaugural John Hayden Memorial Award, in memory of John Loftus Hayden.  John was the Chief Executive Officer of the HEA from 1983-2003, a period of intensive activity in higher education in Ireland.   Following his retirement in 2003, he became a Governor of Mary Immaculate College in 2004 and served on An Údarás Rialaithe until 2013, during which time he made a very valuable contribution to the development of the College.   John was appointed to the MIC Board of Trustees in September 2013.   He passed away in June 2015. The award, valued at €1500, was presented by his wife, Mrs. Gemma Hayden, to the student who is deemed to have made the most significant contribution to society through his/her participation in volunteering initiatives in either the cultural or social sphere.   This year there were joint recipients; Áine Stafford from Clonmel, Co. Tipperary and was Rachel Dunne from Dunmore, Co. Galway.

The event also included the presentation of nine GAA Bursary Awards, valued at €750 each, awarded by the GAA in recognition of a student’s sporting achievements.

Also on the night, a number of recent graduates were awarded for their stellar academic achievements. Full list available to view here.

Congratulating all the recipients Professor Eugene Wall, President (Acting) of Mary Immaculate College said “Individually and collectively, all of the students, both current and graduated, whom we honour today embody our College’s mission – ultimately to make the world a better place through our ideas, our innovations and our engagement”.

Continuing he encouraged all students present to “Be open to possibility and to the idea that deviating from an obvious path can lead you to a place you might never have considered but which could offer you immense satisfaction and reward”.

Concluding he offered the following advice “Set realistic standards for yourself and don’t torment yourself with unreasonable perfectionistic demands.   It’s okay to be a perfectionist – but you must learn to live with your own imperfections… Secondly, I would urge you to recognise that you should not define yourself and your worth solely in terms of your achievements, important as these may be.   Finding fulfillmen and flourishing personally means that the goals that you set for yourself must extend beyond narrow achievement goals, however sublime you find the fruits of success.   Do not neglect your personal development – nor your interpersonal and social obligations that arise from your extraordinary talents”.