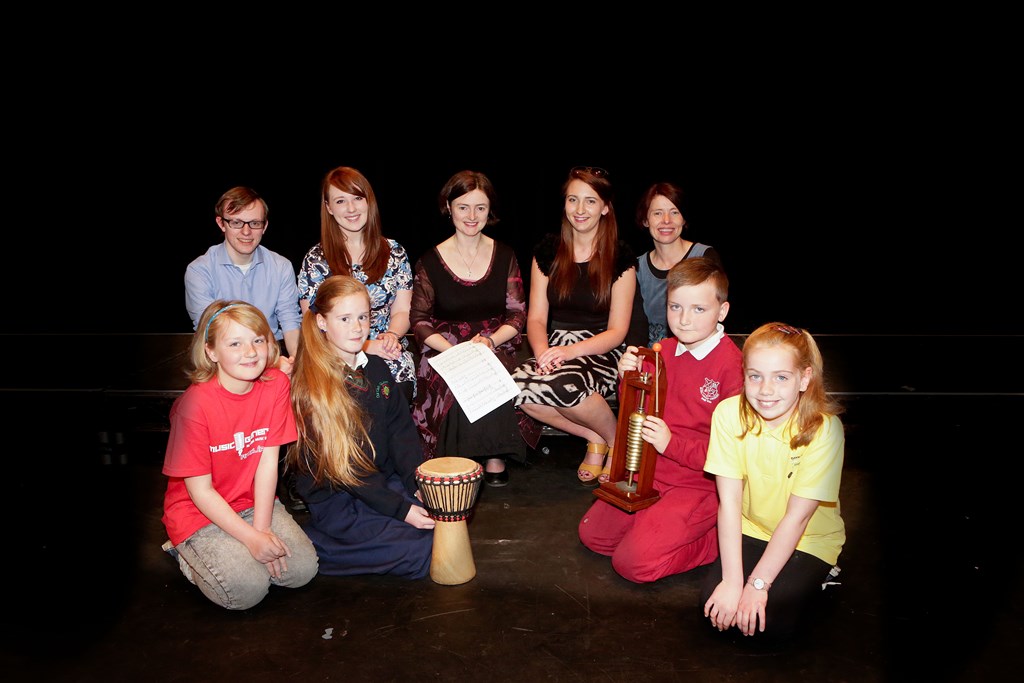 On April 20, over 100 children from the Mary Immaculate College Children’s Choir performed a variety of songs, including the world premiere of ‘Flying Things’ by MIC Composer in Residence, Anne-Marie O’ Farrell, with two other local children’s choirs, Cantette and the Burren Children’s Choir to a full house in the Lime Tree Theatre.

The MIC Children’s Choir is an exciting partnership between the Department of Arts Education & Physical Education, the Transforming Education through Dialogue (TED) Project at Mary Immaculate College (MIC) and Music Generation, Limerick City and has been in existence for two years. Initiated by Dr Ailbhe Kenny (MIC) and directed by Máiréad Ní Chondúin (MIC), the choir is a College/community choral initiative involving fourteen student volunteers from MIC and fourth and fifth class children from four primary schools in Limerick city. The schools participating in the choir were Corpus Christi National School, Our Lady of Lourdes National School, Our Lady Queen of Peace National School and St. Munchin’s Girls School.

The choir is a ‘teaching choir’, in that weekly choral training workshops with Máiréad Ní Chondúin prepare students to work with individual classes in schools on a common repertoire. Regular visits to MIC are also key to the initiative where all of the children come together for ‘big sing’ events.

Speaking on this innovative project, Máiréad Ní Chondúin said; “The dedication, inspirational teaching and boundless enthusiasm of the MIC student volunteers are at the heart of Monday’s performance in the Lime Tree Theatre. They are a wonderful example of MIC community collaboration, and their faithful commitment to weekly singing sessions with their classes have multiple benefits especially for the children, who now share their love of singing and performing, and who have grown so much in confidence and in their ability to work together.”

Congratulating everyone involved, Ms. Eucharia McCarthy, Director of the Curriculum Development Unit, MIC said; “This kind of work would not be possible without the dedication and support of principals, teachers and staff in schools and today we acknowledge and celebrate the very important work that you do on behalf of the children in your care. We also commend parents, who have the most important role in educating their children and celebrate the wonderful job that you are doing”.

She paid special tribute to composer Anne-Marie O’Farrell saying: “We are extremely fortunate to have an artist of Anne-Marie’s talent and calibre involved in this project, and we thank her most sincerely for composing the beautiful music and lyrics which we are about to hear today”.

Anne-Marie O’Farrell is a multi-award winning artist, originally from Dublin, and has received many national and international awards for her original compositions. She has composed for a variety of instrumental and vocal media, and her works are featured on the higher examination grades of conservatory syllabuses around the world. She was appointed MIC Composer-in-Residence in April 2014 and has since then been busy leading workshops for students in music education classes at undergraduate and postgraduate level in addition to composing several new musical works for and with the wider Mary Immaculate College community. You can check out Anne-Marie on her website here.

Speaking on the experience Anne-Marie said; “I am thrilled to have had the opportunity to compose for such a large group of children singing together and I hope that this event gave them a taste for the buzz of being performers themselves. It is also a most valuable opportunity for the MIC students involved, as they’ve had the chance to learn more about choral direction of large groups of children through teaching them the new piece written specially for the occasion.” Concluding she said it was very exciting to see and hear the children perform her work.

Paul Treacy, 3rd year Bachelor of Education student, one of the participating MIC students, echoed these sentiments saying “I believe the MIC children’s choir is extremely valuable. It provides Mary Immaculate students with the opportunity to gain the skills required to become a choral leader. For the children, it is fun, enjoyable and it allows them to become part of a wider community through singing with other choirs and being brought into the college. For me personally, I have gained so much knowledge and experience through the MIC children’s choir. It has helped me to better understand what it is to be a teacher and also what it means to be a choral leader.”

MIC Children’s Choir is supported by Music Generation, Ireland’s National Music Education Programme. Initiated by Music Network it is co-funded by U2, The Ireland Funds, the Department of Education and Skills and Local Music Education Partnerships. Music Generation, is a five-year programme (2010 – 2015) provided locally, aimed at helping children and young people to access music education in their own locality. Thomas Baker on behalf of Music Generation Limerick City was present on the day and delivered a singing workshop via a puppet show much to everyone’s enjoyment. Speaking after the event he said “Both myself and my puppet friends think the children rocked. I’m delighted to have had an opportunity to be involved in such a fun and entertaining event that all the children involved clearly enjoyed.”

The TED Project, housed in the Curriculum Development Unit in Mary Immaculate College, has been working in partnership with schools and voluntary and statutory organisations since 1998 so that all children may reach their potential and benefit as much as possible from their education. To that end TED reaches out to build partnerships with people who work for children and with children by facilitating a connection between the expertise of College staff and the identified needs of schools, voluntary and statutory groups to address issues of equity of outcome in education.

Speaking at the event TED Coordinator, Ruth Bourke, spoke of TED’s delight in welcoming “all three children’s choirs here today for the culmination of months of preparation for the premiere of ‘Flying Things’. I would also like to congratulate them on a wonderful performance and commend all the children, their teachers, our student volunteers and the Choir Directors, Máiréad Ni Chondúin and Máire Keary Scanlon for their commitment to the project”.

For further information on the MIC Children’s Choir, please contact Ruth Bourke on [email protected] or 061-774715.

Check out the Curriculum Development Unit on their website here.

Check out Music Generation Limerick City on their website here.

Check out the TED Project on their website here.