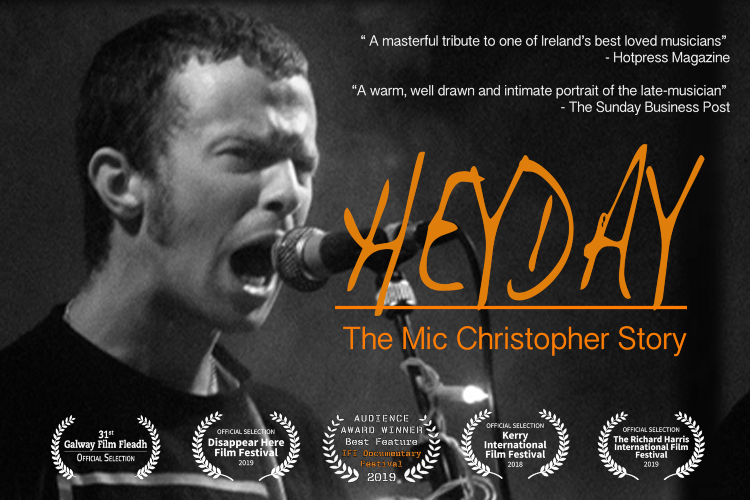 The heartfelt film charts singer-songwriter Mic Christopher’s humble beginnings busking on the streets of Dublin, his rise to rock star with his band The Mary Janes.

The highly anticipated documentary film about the much loved Irish singer-songwriter Mic Christopher will screen in Limerick on Saturday, October 26th as part of the Richard Harris International Film Festival.

Mic Christopher and his music touched and inspired a generation of Irish talent, galvanizing his friends into following their dreams and sending them on to great success. This is the story of a man whose life and love for it changed Irish music forever.

Already garnering much admiration, it’s been praised as, “ a masterful tribute to one of Ireland’s best-loved musicians” and “a warm, well-drawn and intimate portrait of the late-musician”.

The film has just picked up the Audience Award at the Irish Film Institute Documentary Festival, with a U.K. premiere set for next month, where it will be the opening-night feature at the Irish Film Festival London.

The heartfelt film charts singer-songwriter Mic Christopher’s humble beginnings busking on the streets of Dublin, his rise to rock star with his band The Mary Janes, the near-fatal accident that left him millimeters from death, through to his final year where he leads an entire generation of Irish musicians onto fame, success, and new artistic highs.

When the song ‘Heyday’ posthumously appeared in a Guinness ad alongside Michael Fassbender in 2005,  Mic Christopher’s music reached a wider audience, though until now he has remained largely unknown outside of Ireland.

Told through the eyes of those whose lives he touched (Oscar-winner Glen Hansard, Actor/writer Sharon Horgan, Mike Scott of The Waterboys, Bronagh Gallagher, Josh Ritter, Lisa Hannigan, Colm Mac Con Iomaire and many more.) – this epic story of extraordinary music and friendship will both touch and inspire.

For more information on the Documentary and Festival click here.