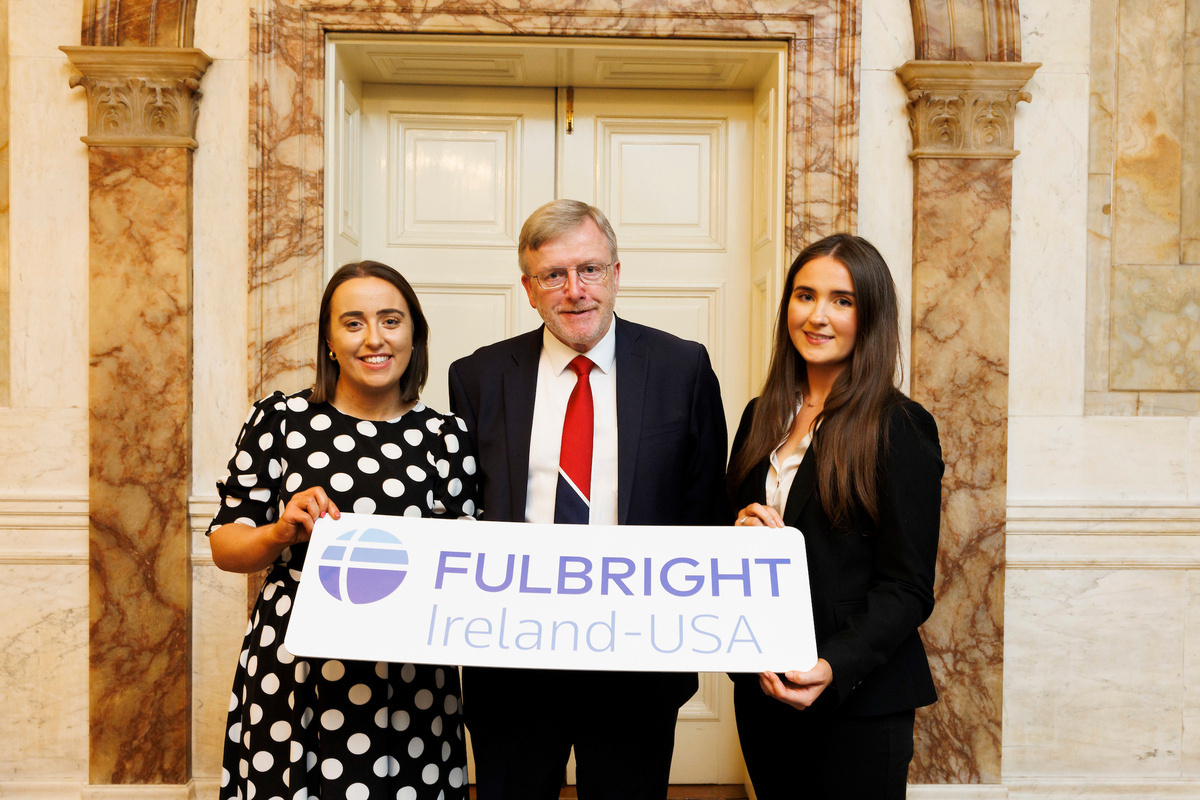 A Mary Immaculate College postgraduate student and a recent graduate have both been awarded a scholarship from the Fulbright Commission to study in America in recognition of their excellence in academia. MIC Fulbright awardees Eilís Ní Iarlaithe, from Baile Mhúirne, and Eimear Millane, from Kildare, were officially awarded Fulbright Foreign Teaching Language Assistant (FTLA) scholarships at a special ceremony at Iveagh House in Dublin.

The Fulbright Programme was established in 1946 and has been annually awarding Irish-US exchange scholarships for sixty-five years. The grants are awarded to Irish citizens to study, research, or teach in the US and for Americans to do so in Ireland in return. Since its formation, over 2,500 postgraduate students, scholars, professionals, and teachers across all disciplines have participated in the programme, which is supported by the Irish Department of Foreign Affairs and the US Department of State.

Eilís Ní Iarlaitheis a native Irish speaker from Baile Mhúirne in the Múscraí Gaeltacht. Eilís completed a Bachelor of Education with a specialism in the Irish arts in Mary Immaculate College in 2016. She has a keen interest in language acquisition and is currently enrolled in the Master of Education programme in MIC. Eilís’ research focuses on methodologies used in the teaching of a second language. Having grown up immersed in the in the Irish language and the culture of Ireland, Eilís has a strong passion for sharing her culture and promoting Gaeilge. Eilís currently teaches in Gaelscoil Chaladh an Treoigh, an Irish medium primary school in Limerick. As a Fulbright FLTA, Eilís will teach the Irish language and take classes at the University of Montana.

Speaking after being announced as one of this year’s scholarship awardees, Eilís said: “I am absolutely thrilled to have been awarded the Fulbright FLTA this year. It is an incredible honour and I am really excited for the exceptional year ahead in the University of Montana. Fulbright has always been an ambition of mine, it is something that I have been following and aspiring to for years. I am extremely grateful for this incredible opportunity to teach the Irish language and share the Irish culture in the United States while also having the chance to be immersed in the American culture myself. It really is a dream come true and I cannot wait to get started.”

Also awarded a Fulbright FTLA was Kildare’s Eimear Millane. Eimear holds a Bachelor of Education degree from MIC and is currently undertaking a Masters in Literacy and the Curriculum in St. Mary’s University, Belfast. She is a primary school teacher in Bunscoil Bhríde in Co. Kildare, where she oversees the Coiste Gaelach. Eimear has a keen interest in GAA and plays camogie with Naas in Co. Kildare. She is also a traditional musician, playing the concertina and singing in the sean nós style. She has competed successfully at Fleadhanna Ceoil throughout Ireland. She will be a FLTA to the University of Connecticut.

Celebrating the two MIC Fulbright awardees was Professor Michael Healy, Vice-President of Research at MIC, who said: “I wish to congratulate Eilís and Eimear on being awarded a Fulbright scholarship and I wish them both every success in their time in Montana and Connecticut. The Fulbright Awards are highly competitive and awarded only to those who have demonstrated excellence in research and study, and is further evidence of the rising profile of research and scholarship at MIC, a development which the College takes much pride in.”

Joe Hackett, Secretary General of the Department of the Foreign Affairs said: “I extend my warmest congratulations to this year’s MIC Fulbright awardees. Fulbright scholarships provide a transformational experience for individuals and play a crucial role in sustaining the close relationship that Ireland and the United States share. Every year, Fulbright recipients have the exciting opportunity to study, work, and experience life in the U.S., and to represent the best of Ireland. I wish this year’s Awardees every success for their time in the U.S.”

The next round of applications for Fulbright Irish Awards will open on 31st August 2022, interested candidates can go HERE  for more information.