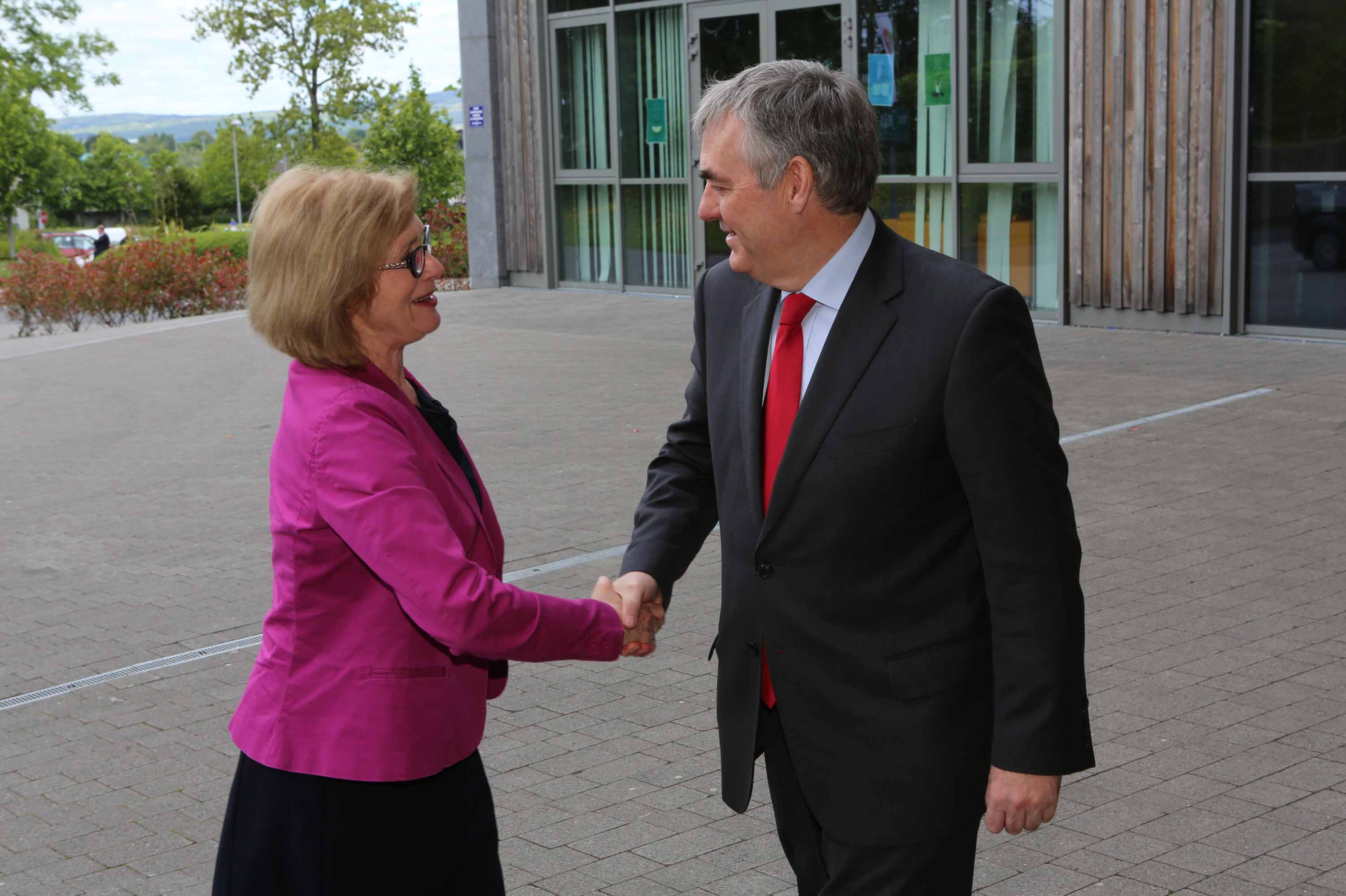 Minister for Education & Skills, Minister Jan O’Sullivan T.D. today announced that MIC incorporates St Patricks College Thurles, an institute that has been synonymous with education dating back to 1837.

The foundation stone was laid in the presence of the Great Liberator, Daniel O’Connell in 1829. Today, the College offers four (4) concurrent degree programmes that are designed to prepare students to become second-level teachers. These programmes are validated by the University of Limerick and are accredited by the Teaching Council.

As a result of the incorporation, which will take place formally in 2016, MIC will become a multi-campus institution offering 9 undergraduate degree programmes in Education and the Liberal Arts, as well as a wide range of Continuing Professional Development offerings for teachers and numerous postgraduate opportunities to Masters and PhD level. This development will consolidate the position of MIC as the most significant provider of initial teacher education outside of Dublin.

Commenting on this exciting development, Jan O’Sullivan said: “This is a very significant development that will be of great benefit to the students, staff and broader stakeholders of Mary Immaculate College and St. Patrick’s College.  I want to commend the management and staff of both institutions on the professional manner in which they have brought about this incorporation ably assisted by the Higher Education Authority.

“Today’s announcement underlines Mary Immaculate College’s pre-eminent role in the provision of initial teacher education in Ireland.  The quality and dedication of teaching staff in the Irish education system is recognised internationally as one of our great strengths.  MIC has contributed hugely to this positive aspect of education in Ireland and this new development will ensure that the College continues to go from strength to strength.”

The announcement was also welcomed by the Chief Executive of the Higher Executive Authority (HEA), Mr. Tom Boland, whose officials were closely involved in negotiations with MIC and St. Patrick’s College.

Also speaking on the announcement Bishop of Limerick and Chair of MIC Board of Trustees, Most Rev. Brendan Leahy said: “This is a highly significant milestone in the 115-year history of Mary Immaculate College, founded by Bishop Edward O Dwyer and the Mercy Sisters, and I wish to commend the management teams in both St. Patrick’s College Thurles and Mary Immaculate College for their initiative and leadership in this project.

“This incorporation will further strengthen Mary Immaculate College’s position at the forefront of teacher education and ensure that we continue to have excellent teachers and educators from early childhood through primary and secondary education as well as at the third and fourth levels of higher education.”

According to Prof. Michael A Hayes, President of MIC, today’s agreement to incorporate St. Patrick’s College, which will be re-branded as MIC St. Patrick’s Campus, Thurles, is the result of many months of negotiations and planning on foot of a request by Minister O’Sullivan for MIC to explore the possibility of absorbing the educational provision at St. Patrick’s College and of operating its campus facilities under the MIC banner.

Prof. Hayes added that he felt honoured to receive the Minister’s invitation because of what it says about the quality and prominence of MIC in the national higher education landscape. “Clearly,” he said, “MIC is held in the highest regard by the Minister and the Department of Education & Skills and is seen strategically as the ideal vehicle for the continuation of the important subject areas taught at St. Patrick’s College, including Irish, Religious Studies, Business Studies and Accounting, all of which are in high demand by post primary schools searching for the most highly qualified graduates.

“There is also an obvious complementarity in both campuses’ cultures and ethos, where the student is placed at the centre of both institutions’ missions and a campus environment conducive to a warm and friendly community ambience is at the centre of all its activities.”

Prof. Hayes also said that it was fitting that MIC, whose foundation as a Catholic College dates to 1898, should continue the legacy left by St. Patrick’s College and that its great tradition in education should endure with the opening of a new chapter in its long history. Prof. Hayes paid tribute to the current President of St. Patrick’s College, Fr. Tom Fogarty, commending him on his stewardship of the College since May 2004.

Prof. Hayes said: “In particular, I would like to thank Fr. Fogarty for the spirit of partnership and collaboration we have enjoyed together since we commenced our negotiations towards this incorporation and I look forward to working with him over the next several months to pave the way for a smooth and seamless transition next summer. At the outset of this exercise, I delight at the prospect of welcoming staff at St. Patrick’s College as our new colleagues, and of meeting students at the campus to share with them our great ambitions for their future as part of the MIC learning community.”

Echoing these sentiments Fr. Fogarty said “We warmly welcome this announcement and are delighted to see that the valued traditions and heritage of our institution will endure under the flag of Mary Immaculate College. I wish to thank the Minister for Education and Skills for recognising the uniqueness and the high quality of our programmes and for her acknowledgement that the Board of Trustees of St. Patrick’s College has invested hugely in the College campus over the past ten years thus ensuring that we have state-of-the-art facilities.”

The MIC President also expressed his appreciation for the tremendous support provided by Minister Jan O’Sullivan during the negotiations and thanked senior members of the Department of Education and Skills and of the HEA for the hard work they had invested in arriving at an agreement while maintaining an excellent and collegiate working relationship with MIC and St. Patrick’s College.

Looking forward to next steps, President Hayes noted that the student experience at MIC is widely regarded as second to none and is perennially cited by its students as one of the key reasons for choice of College as well as a most valued aspect of graduates’ time at the College. “We will now implement a pre-incorporation programme that ensures a cohesive student experience at both campuses, with the high quality of educational provision and infrastructure that MIC is known for in Limerick City extending to St. Patrick’s Campus, Thurles.

“I am also greatly excited by the prospect of working with our colleagues in Thurles, and our partners across Tipperary as whole, to bring about an important new development for higher education within the Mid West Regional Authority Area and its Strategic Plan for 2012-30.” said Prof. Hayes.

Crucially, the incorporation of St. Patrick’s College, Thurles, is seen by MIC as fully consistent with the National Strategy for Higher Education to 2030. Emphasising this, the MIC President stated that “the principles underpinning the new initiative fully reflect those of the National Strategy which call for creation of a mission-distinctive continuum of higher education institutions that are collaborative, clustered regionally, and capable of delivering national objectives around the knowledge economy, orientation with the wider national and international community, and most particularly, of providing the highest quality of educational provision.”

The new Thurles campus will now become an integral element of the Shannon Consortium, the Mid-West Regional cluster of higher education institutions that include MIC itself, the University of Limerick and Limerick Institute of Technology. The incorporation will contribute directly to the realisation of objectives that were set out in the 2012 report of the Sahlberg International Review Panel on The Structure of Initial Teacher Education in Ireland. In addition, it is envisaged that the newly incorporated entity will make a pivotal contribution to the activities of the National Institute for Education Studies (NISE) which operates under the aegis of the Shannon Consortium.

This Autumn, MIC will announce details of its 4 new offerings at its Thurles Campus: concurrent degree programmes leading to sought-after specialisations in subject areas that include Irish, Religious Studies, Accounting and Business Studies. The programmes will offer wholly unique content and subject combinations, presenting very favourable employment prospects to graduates.

In February 2016, the programmes will be available to CAO applicants who want to become specialist post primaryteachers and it is anticipated that demand will be high following an intensive information campaign the College will conduct at career fairs and during post primary schooloutreach visits, starting this month.