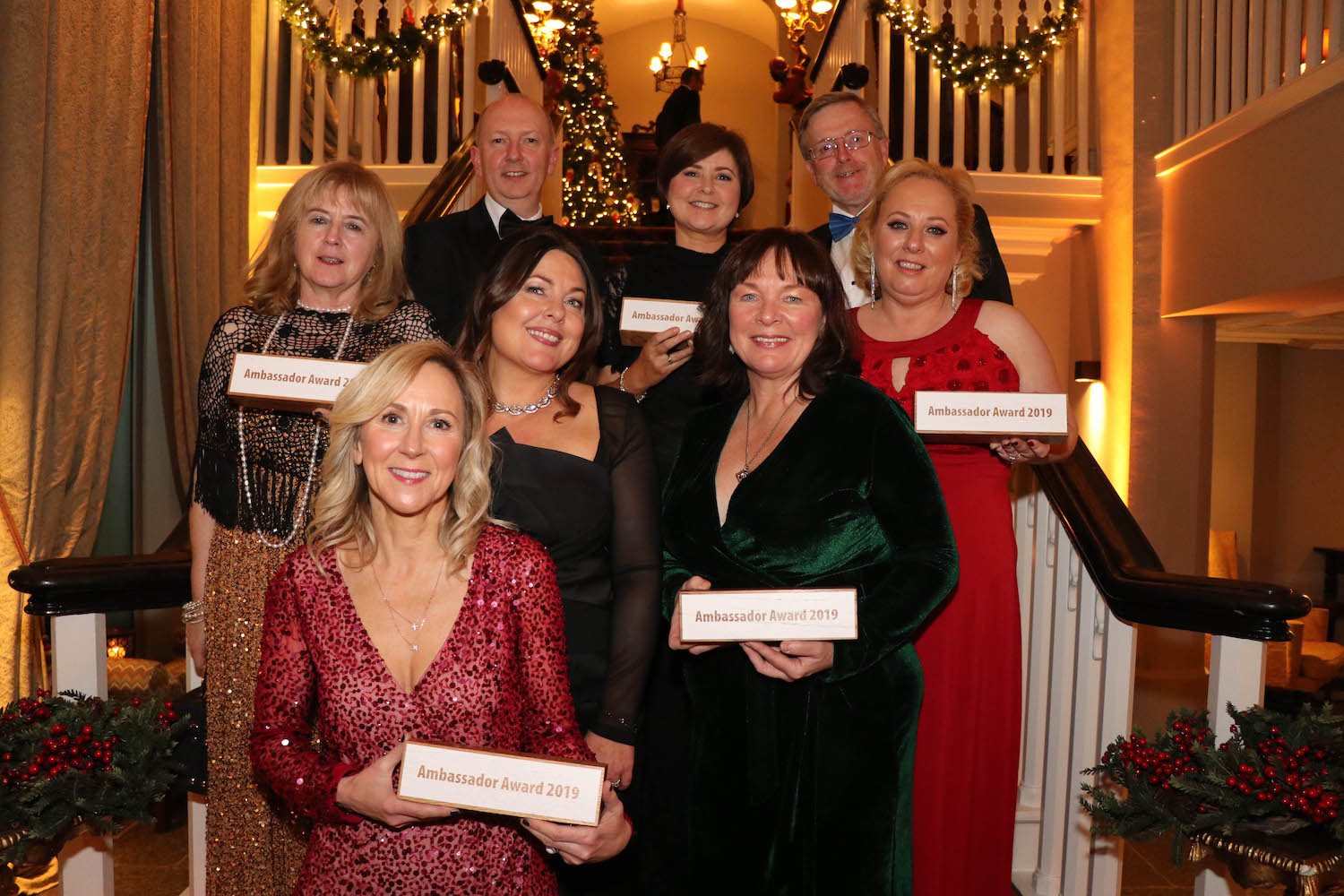 MIC wins at the Shannon Ambassador Awards. Pictured at the Awards 2019 in Dromoland Castle on Wednesday, December 4. Picture: Kate Devaney/ilovelimerick

On Wednesday, December 4, Mary Immaculate College (MIC) was recognised for its valuable contribution to the Limerick area at the annual Shannon Region Ambassador Recognition Awards. The awards ceremony, held at Dromoland Castle, commended the efforts of those who have brought and will bring international conferences to the Shannon Region.

Six conferences, organised by the staff of MIC and hosted at the College’s Limerick campus, received awards from the Board of the Shannon Region Conference and Sports Bureau in association with Fáilte Ireland.

The organisers of the upcoming 10th Biennial Inter-Varietal Applied Corpus Studies (IVACS) International Conference, due to be held at MIC Limerick in June 2020, and theACIS American Conference for Irish Studies, which will also be held at MIC in 2021, also received awards.

Commenting on the success of MIC, Professor Eugene Wall, President of MIC, said, “I’m delighted that Mary Immaculate College has been recognised for its efforts to bring international conferences to Limerick. The organisation of these conferences requires an incredible amount of dedication and hard work from so many colleagues across the College, who all give so generously of their time to ensure that each conference has been and will be a success. I would like to sincerely thank our staff in the Faculty of Education, the Faculty of Arts and the Research and Graduate School at MIC for their sterling efforts in attracting hundreds of delegates from around the world to these conferences, which have impacted so positively on the local and regional economy.”

The Revolutionising Education Through Play and Voice Conference, organised by members of the Faculty of Education including Professor Emer Ring, Dr. Maurice Harmon, Dr. Lisha O’Sullivan, and Sheila O’Callaghan, gathered over 300 national and international delegates in October. The conference, which was attended by parents, educators, undergraduate and post-graduate students, and children explored the role of play and voice in education from the early years, through to primary and post-primary for all children.

Professor Emer Ring, Dean of Education at MIC, said, “We’re delighted that the Shannon Region has been affirmed nationally and internationally as a beacon for progressing education and contributing to the creation of a world-class education system where all children are included. We are absolutely thrilled to receive this award.”

The EUPOP 2019 conference, held in July, brought together over 80 delegates from 19 countries across Europe and the world to MIC Limerick. Organised by Dr. Marcus Free, lecturer in the Department of Media and Communication Studies at MIC and Jeanette Ferguson, department administrator, EUPOP 2019 provided a forum for the examination of developments in contemporary popular culture, from the national to the European and global, with a strong current of political inquiry and critique. This was the first time that the three-day conference was held in Ireland, having previously taken place in the UK, Finland, Germany, France, and the Czech Republic.

The 31st International Colloquium of the MayDay Group for Music Education held in May at MIC Limerick explored ‘Music Education as Social, Cultural, and Political Action’, and included delegates from the US, Canada, Portugal, Brazil, Australia, China, the UK, and Ireland.

This was the first time the annual colloquium which includes musicians, music educators, social and cultural theorists from over 25 countries was hosted outside of North America. The conference was organised by Dr. Gwen Moore, senior lecturer in Music Education, Director of Teaching and Learning at MIC and chair of the MayDay Colloquium.

Dr. TJ Ó’Ceallaigh, Programme Director of the M Ed in Irish-medium and Gaeltacht Education program at MIC, accepted an award for the Second All Ireland Research Conference in Immersion Education, which took place in May 2018. The two-day conference was attended by over 200 delegates from eleven countries. Academics, practitioners, and professionals exchanged and discussed new directions and research in the field of immersion education.

Dr. Anne O’Keeffe, senior lecturer in the Department of English Language and Literature at MIC accepted the award for the 10th Biennial Inter-Varietal Applied Corpus Studies (IVACS) International Conference, which will take place at MIC Limerick in June 2020. Dr. O’Keeffe also accepted an award for the Corpus Linguistics 2021 Conference, which is being co-hosted by MIC and will be held in July 2021 at the University of Limerick.

Commenting on the awards, Dr. O’Keeffe said, “Limerick, through the work of MIC and UL researchers, has gained an international reputation within the field of Corpus Linguistics. Hosting two major conferences in the next two years is a major marker of this. Between the two events, we expect to bring up to 600 delegates from around the world to Limerick”.

Another upcoming conference at MIC Limerick also received an award. The ACIS American Conference for Irish Studies will be held at the College in 2021 and is organised by Professor Michael Healy, Vice-President of Research at MIC, Dr. Eugene O’Brien, Head of the Department of English Language and Literature, and Dr. Úna Ní Bhroiméil, lecturer in the Department of History at MIC.