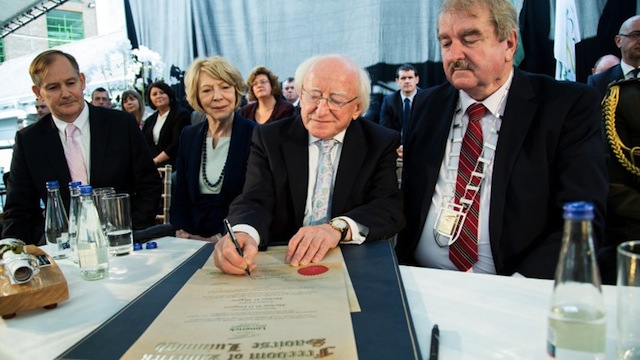 Michael D Higgins is a powerful political voice, writer and poet, human rights advocate and promoter of equality and citizenship. Throughout his political career, Michael served as a leader for almost every aspect of public life in Ireland, including Irelands first Minister for Arts, Culture and Gaeltacht.

Michael was the first of his family to receive a higher education as he studied an undergraduate degree in Political Science and Sociology at the University College Galway. Michael puts a large emphasis on the importance of hard work and equality in his poetry and political speeches. Michael also went on to study at the University of Manchester and Indiana University.

Michaels professional career is extremely varied, as he was a lecturer in Political Science and Sociology at the National University of Ireland, Galway and in the United states. Michael travelled across the west of Ireland to provide education to interested citizens. Michael never lost his love for Limerick as he said, “There are times of celebration in Limerick City of Culture, but the times my parents lived here were hard times in Limerick for many families, as they are today for many families; but the character and the solidarity and care for each other among the people of this city is well reflected, for example, in the recent response to the flooding.”

Michaels desire to share education and equality continued when he began his political career and became Irelands first minister for the Arts in 1993-1997. During his reign as minister for arts he accomplished astonishing things, such as the establishment of Teilifis na Gaeilge (TG4). In addition to this, he repealed the censorship under section 31 of the Broadcasting Acts.

Michael’s work continued on as he continuously speaks on behalf of the rights of citizens both in Ireland and globally. Higgins has campaigned for human rights and written of conflict in many parts of the world, including such areas as Nicaragua, Chile, Cambodia, El Salvador, Iraq and Somalia. He spoke in the Dáil in defence of the 2010 Gaza Freedom Flotilla.

Throughout his lifetime, Michael has published many poems and books including “The Death of the Red Cow”, “The Ass” and “Renewing the Republic.” His poetry and books reside at the National Library of Ireland.

Michael D Higgins is the 9th president of Ireland and is in his 5th year of residency since becoming president in 2011. He has stated from the beginning of his residency that he will only stay in office for one term of 7 years before retiring with wife Sabina Higgins.

Michael’s love of Limerick city forever shines through as he associates Limerick with his beloved father. When he received the Freedom of Limerick honorary award in 2014 he referred to Limerick, as “it is an honor to become soul patron of Limerick National City of culture.” Michael wishes to “build upon the National City of culture for the future.” More than 1000 people attended the ceremony in the Milk Market as it is the highest honor bestowed upon a person by Limerick City and County Council.