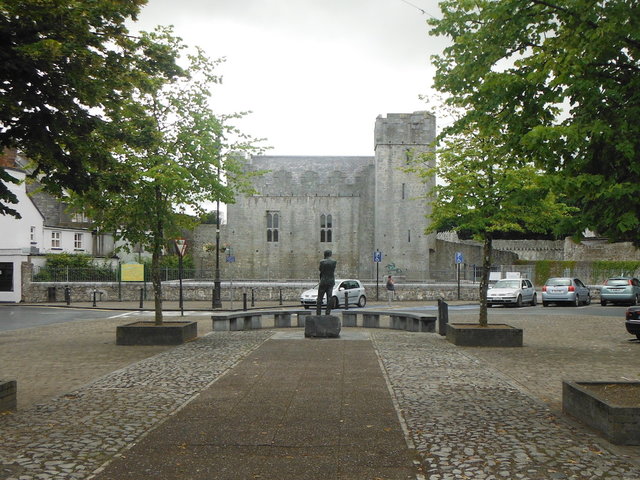 Two of Ireland’s new generation of poets have been named the Michael Hartnett Poetry Award 2016 winners.

The Michael Hartnett Poetry Award 2016 winners will be presented with their awards on the opening night of Éigse Michael Hartnett in Newcastle West, Co Limerick, on April 14, 2016, to John McAuliffe from Listowel, County Kerry for his collection ‘The Way In’ and to Doireann Ní Ghríofa from Kilnamona, Co Clare, for her collection ‘Clasp’.

The Limerick Arts Office and The Arts Council jointly fund the annual award to honour the poetic legacy of the late Michael Hartnett 1941-1999, from Newcastle West. The €4,000 annual prize is awarded on alternate years for collections in English and Irish. This year’s award is for a third or later collection in English published during the past two years and is intended to support poets in mid-career.

Kerry-born John McAuliffe described the award as “a confirmation and encouragement”.

He continued, “In  his poem ‘Struts’, Michael Hartnett describes creatures who abide alone, each on their own ‘ledge, / seldom seeing each other — / hearing an occasional shout / above or below / and sometimes and most welcome / seeing fires like silver spirals / jump along the crevices’. The poem could be describing poets, who work alone (on their own ledges) and, every so often, hear good news and celebrate it at events like Éigse in Newcastle West every April.”

“This award is like one of those spiral-like fires. It’s both a confirmation and a great encouragement to receive the award, especially since I’ve been reading and thinking and talking about Michael Hartnett’s poems, the lyrics, the narratives, the ballads, for as long as I’ve been writing,” Mr McAuliffe said.

“I’m absolutely over the moon!,” Doireann Ní Ghríofa said in response to the announcement of the award. “Hartnett is a hero of mine, so this is such a delight for me. I am so deeply moved by this honour.”

Ms. Ní Ghríofa added, “Michael Hartnett is a writer who has become very dear to me, and I feel such a deep resonance with his work in both languages. As I wrote ‘Clasp’, my first book in English following two books as Gaeilge, those lines from Hartnett’s ‘Inchicore Haiku’ felt particularly resonant, My English dam bursts/and out stroll all my bastards./Irish shakes its head. I am so pleased to accept an award in his name and to wear his ‘muince dreoilíní / necklace of wrens”.

This year’s judges were Rita Ann Higgins and Gerard Smyth. In their citation for ‘The Way In’ by John McAuliffe, (Gallery Press 2015) Gerard Smyth said, “The Way In consolidates the promise of John McAuliffe’s three previous collections. Keenly tuned-in to particular experiences of his own generation, he is a sharp-eyed poet who catches the moods of domestic space and revels in the daily quotidian – nothing seems to escape him.”

the author’s particular achievement is the way in which he appears to be expanding the “Irish poem”, challenging tradition and old idioms but doing so respectfully,” Mr Smyth concluded.

Rita Ann Higgins said, “Door handles, empty wardrobes and the piano that went north in a shoe box are some of the items that might occupy a space in this labyrinth. The result is always the same. These are well-wrought poems that challenge and sing.”

In the citation for ‘Clasp’ by Doireann Ní Ghríofa (Dedalus Press, 2015), Rita Ann Higgins said: “I trust this voice. I trust these poems. Earthiness and physicality jostle for position in Clasp. Doireann Ní Ghríofa is breaking new ground with her fresh, fearless approach to memory and motherhood, loss and love.”

Gerard Smyth stated, “Doireann Ni Ghríofa is a poet pushing boundaries, uncovering new ways of expressing the flux of the modern world, and doing so with a daring lyricism. Her versatility, vitality and emotional range are hugely impressive. With her Letterfrack sequence, she handled a delicate subject with tender care. On the basis of Clasp, Ni Ghríofa is on course to become a major talent, a poet who seems set to move more deeply into the places from which her poetry comes.”

Read more about Michael Hartnett and his poetry here

A Sparrow for the Wolves Feature Film