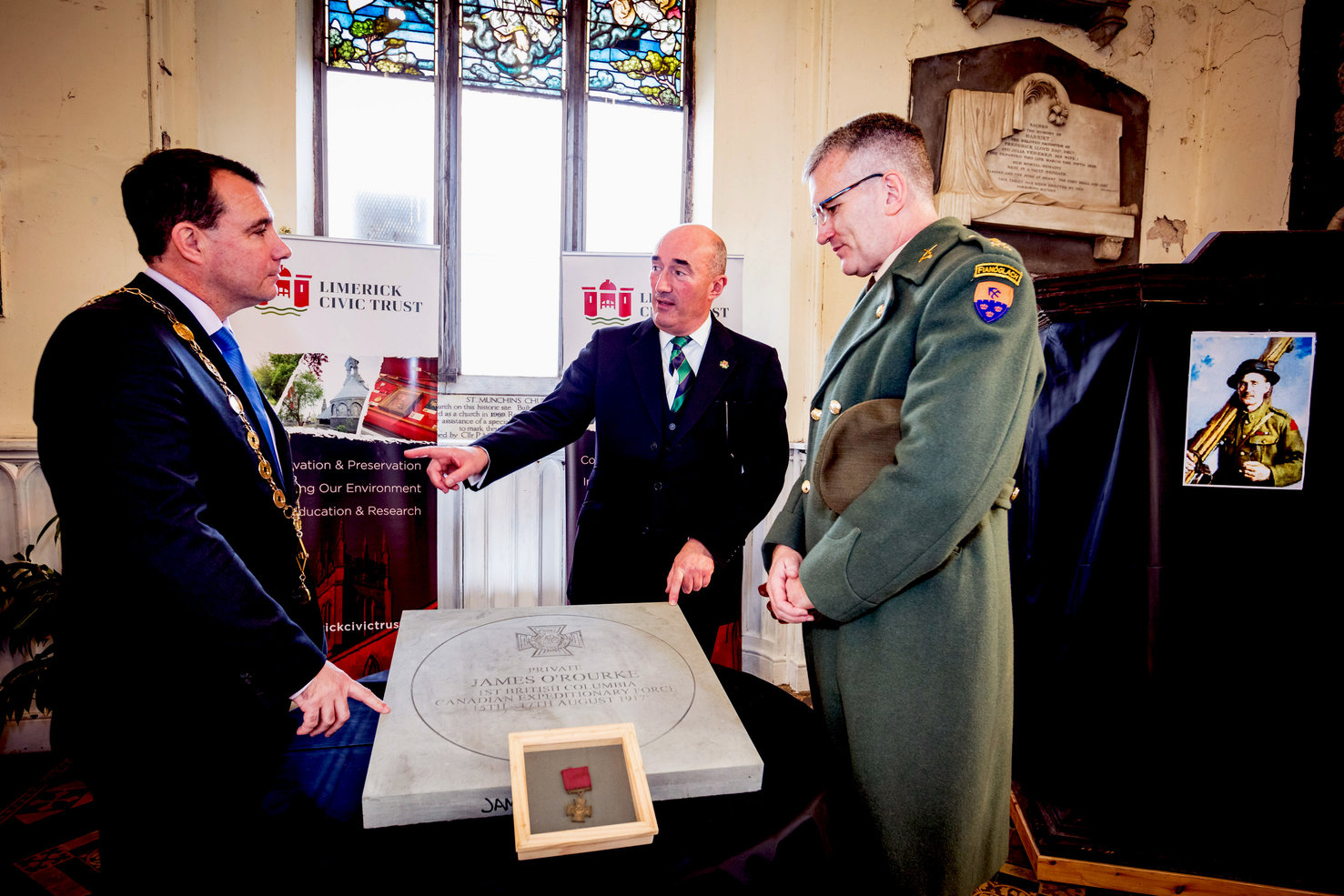 A special paving stone will be laid in Limerick to commemorate Michael James O Rourke, a Limerick man who received a Victoria Cross for his efforts in World War 1.  Limerick Civic Trust presented the VC Paver to the Mayor at a special reception in St Munchin’s Church, King’s Island just a few days in advance of the centenary of Armistice Day.

Pictured is the Mayor of Limerick, James Collins, with David O’Brien, Limerick Civic Trust – A special paving stone was unveiled in Limerick to commemorate Michael James O Rourke at a special reception in St Munchin’s Church, King’s Island just a few days in advance of the centenary of Armistice Day. Picture: Keith Wiseman

Private Michael James O Rourke, who in his early adult life moved to British Columbia, Canada, was awarded the Victoria Cross and Military Medal for extreme acts of valour whilst serving with the Columbian Regiment, Canadian Infantry in WW1.

A quote from his VC Citation states:

“During the period 15/17 August 1917 at Hill 70 near Lens, France, Private Michael James O Rourke48 , who was a stretcher bearer, worked unceasingly for three days and nights bringing in the wounded, dressing their wounds and bringing them food and water. During the whole of this period the area in which he worked was swept by heavy machine-gun and rifle fire and on several occasions, he was knocked down and partially buried by enemy shells. His courage and devotion carrying out his rescue work in spite of exhaustion and incessant heavy fire inspired all ranks and undoubtedly saved many lives.”

Unlike many holders of the VC, Michael survived the war and settled in Vancouver British Columbia.

Over the last four years, the specially-commissioned stones have been laid at the birth places of Victoria Cross recipients. Every Irish-born soldier who won a Victoria Cross in the First World War is to have a paving stone erected in their honour. Michael was the only recipient from Limerick.

The VC Paver was officially received into the City by The Mayor of Limerick City and Council, Cllr James Collins, followed by a Dedication Ceremony and Act of Remembrance.  The official reception, hosted by Limerick Civic Trust, was attended by members of the 12th Battalion from Sarsfield Barracks, the Limerick branch of the Royal British Legion (RBL) and representatives from Limerick City and County Council.

David O’Brien, Limerick Civic Trust, said, “I would like to acknowledge the trojan efforts of Brian Duffy, Chairman of the RBL for ensuring the delivery of the VC Paver. Michael James O Rourke was an extraordinary man who displayed incredible courage and bravery in a war that has affected all our lives today.  The sacrifice he made deserves to be honoured and it is only fitting to have a VC Paver installed in the hometown of his birth and upbringing so he can be remembered.

The Mayor of Limerick, James Collins, said, “It is an honour to pay tribute to the bravery and valour of Michael James O Rourke and at the same time recognise how the war impacted him afterwards. It is important that we recognise our history in Limerick. Sometimes, we’re so busy looking forward, we forget to look back at how we got here. We forget those who have gone before us, the sacrifices they’ve made and their bravery.  I would like to congratulate the Royal British Legion for securing the paver. It is an honour he richly deserves.”

The location of where the VC Paver will be laid has yet to be decided.

Limerick Civic Trust, which was formed in 1983, is an independent, non-profit making voluntary society.  It is mainly supported through donations from local government, industry, business, and individuals.  Its mission is to protect and enhance Limerick’s heritage and environment through conservation and preservation, improving civic amenities and education and research.

The Trust undertakes projects that make places more attractive, enjoyable and distinctive.  Whether it is improving or maintaining a graveyard, a riverside walk, community garden or City Street, the Trust’s work aims to promote civic pride.  The Trust also undertakes conservation and preservation projects as well as Educational and Research work.