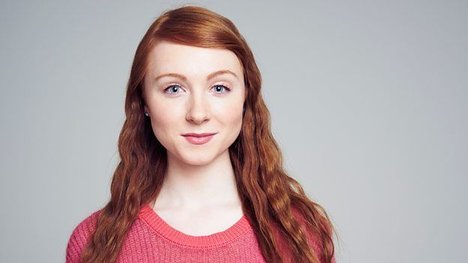 Limerick Actress Michelle Fox is to star in a new BBC television programme focusing on a young girl’s battle with anorexia. Michelle will play Imogene, a 17-year-old Irish blogger who becomes ill with anorexia in the dark BBC3 drama Overshadowed. The show is based on the award-winning play by Eva O’Connor who also appears in the series. The story is told through eight 10-minute blog posts posted by blogger Imogen.

The story will be told through a series of vlogs made by Imogen creating a documentary style feel for the series. The story starts with Imogen receiving a new camera and deciding to start a blog, over the course of the series viewers will see her gradually start to show signs of anorexia. Even though the subject matter is quite dark and gritty the show with its humour and compelling storytelling will make for an interesting insight into the mental state of the main character played by Michelle Fox.

Michelle Fox, Caherdavin native started her acting career at Frontline Stage School. At the age of 16, she joined the Limerick Youth Theatre. Michelle then went on to study Drama at University College Cork before moving to London to try her hand at acting and enrolled at the Bristol Old Vic Theatre School. Michelle also played a small part in the BBC programmes Doctors and legendary television show Casualty, however, the role of Imogen is her first leading television role.

Michelle’s star is certainly rising as next year she is due to star alongside acting royalty Hugh Grant in the BBC TV drama, A Very English Scandal. The show is set to premiere in early 2018.