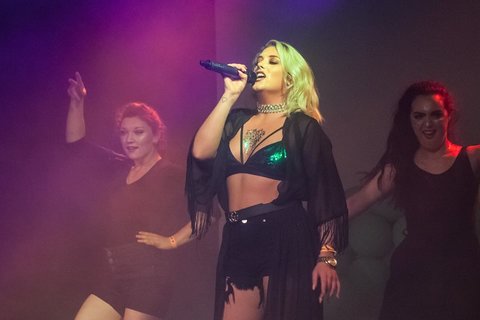 The 22-year-old student of the University of Limerick is a former band member of UK girl band, Office Girls and made it to the boot camp stages of the 2016 X-Factor series, along with her fellow band members.

Having been encouraged by her mother to audition for a new UK girl band, Office Girls in 2015, Michelle sent in her video audition and the next day received a phone call to arrange a meeting in London. A week later confirmation came that Michelle was part of the band, having been on placement from her course in UL at the time this was the perfect opportunity.

Michelle speaks fondly of her experience in Office Girls, “The highlight of being in the band has been shooting the video for our new song “Dirty Work” it was so amazing with the lights, camera, and makeup. We are built up to all the hype and it was so great.” Michelle is well versed in performing and sang in front of 20,000 people at Trafalgar Square when she was with Office Girls.

Michelle has a soulful voice and has played the piano from a very young age, “My Grandad paid for piano lessons when I was five and I think my Mam and Dad thought I would play it for a few months but they couldn’t stop me, I was addicted and I was singing all the time.”

Michelle speaks about her musical influences, “My Grandad has me listening to jazz like Etta James… I love R&B like John Legend, Justin Timberlake, Beyoncé and Tina Turner, I love all the divas.”