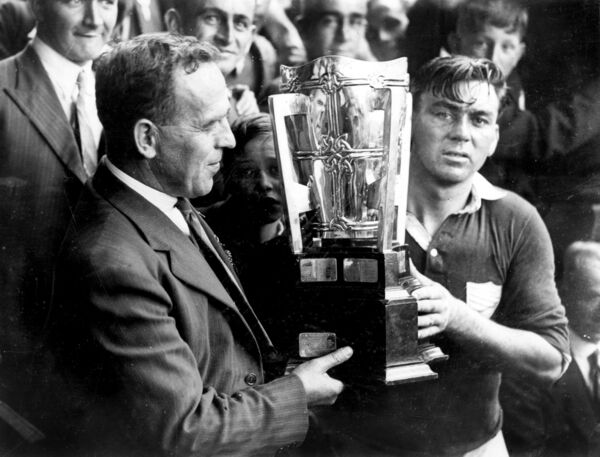 Mick Mackey – new Munster Senior Hurling Championship trophy to be renamed after him.

A new Munster Senior Hurling Championship trophy is to be presented in honour of Limerick hurling legend Mick Mackey.

This decision was announced by Munster GAA on their website Thursday afternoon, stating:

The Munster senior hurling champions will now be presented with the Mick Mackey Cup instead of the Munster Cup donated by the Munster Council in 1928.

The current trophy is a replica of what was commissioned back in 1990 when it was replaced because of the cup’s age. In 2013 the Limerick senior hurling team proposal to rename the trophy in honour of Mackey was rejected.

During his incredible career, Mackey won five Munster titles as well as three All-Ireland’s. He also guided the county to provincial success as a manager in 1955.

As the first superstar of hurling, Mackey came to be regarded as one of the greatest players of all-time, even during his playing days.

Following a @MunsterGAA meeting tonight, a proposal from @LimerickCLG to present a new cup for the Munster Senior Hurling Championship in memory of Mick Mackey was passed. pic.twitter.com/lQVZQLP1us

In 1961 Mackey was presented with the Caltex Hall of Fame award for being the outstanding personality in all-time hurling. That same year he was chosen in the half-forward line when journalist P.D. Mehigan picked “the best men of my time”.

In 1988 the main covered stand in the Gaelic Grounds in Limerick was named the Mackey Stand in his honour, while the main playing field of the Ahane club is named Mackey Park.

This is a tribute to the entire Mackey family for their contribution to the game.

In 2013 a bronze statue in memory of Mackey was unveiled in his native Castleconnell.

Ned Maher, the former Tipperary goalkeeper of the 1890s, said: “Mick Mackey was the greatest hurler ever and I saw them all.”

Girls Get Active Hackathon increases awareness about women in sport