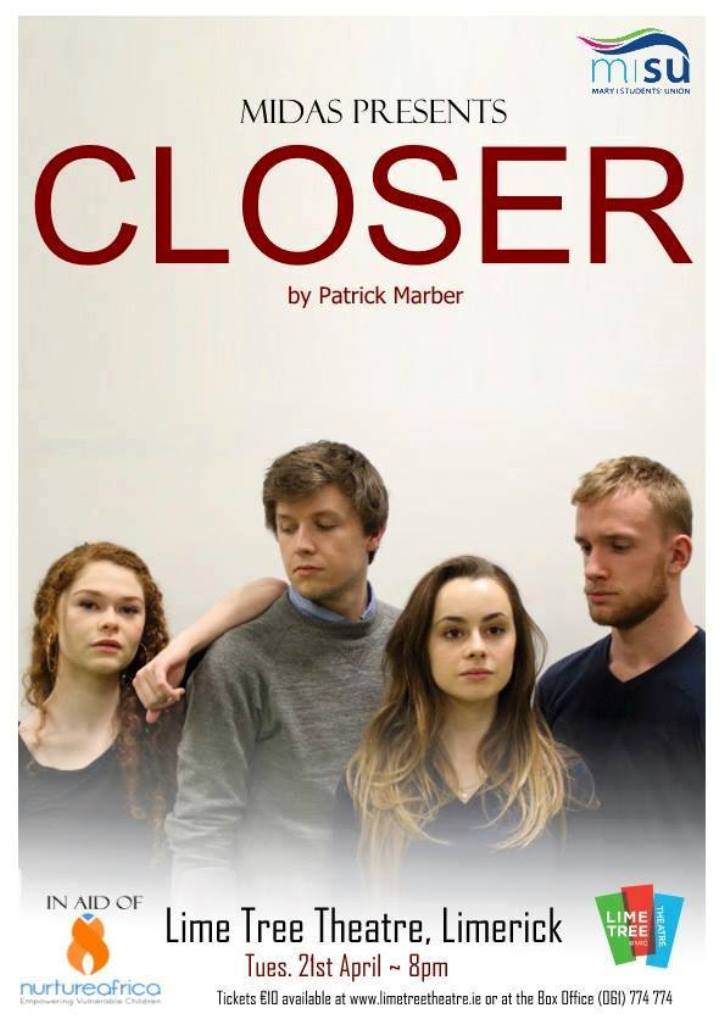 After recently selling out their run of Les Misérables, Limerick-based drama group MIDAS (Mary I Dramatic Arts Society) returns with their production of Patrick Marber’s Closer which was had a hugely successful run in early March. The team are delighted to announce a return date in the Lime Tree Theatre on April 21 at 8pm. Tickets for this revised production cost €10, and are available to book on the Lime Tree Theatre website here. Suitable for 18+.

The plot of the show is four lives intertwining over the course of four and a half years in this densely plotted, stinging look at modern love and betrayal. Dan, an obituary writer, meets Alice, a stripper, after an accident in the street. Eighteen months later, they are a couple, and Dan has written a novel inspired by Alice. While posing for his book jacket cover, Dan meets Anna, a photographer. He pursues her, but she rejects his advances despite their mutual attraction. Larry, a dermatologist, “meets” Dan in an Internet chat room. Dan, obsessing over Anna, pretends to be her and agrees to meet Larry the next day at an aquarium. Larry arrives and so too, coincidentally, does the real Anna. This sets up a series of pass-the-lover scenes in which this quartet struggle to find intimacy but can’t seem to get closer.

Closer is directed by Shane Hickey-O’Mara and designed by Matthew Moran, and will be taking to the stage for one night only in aid of Nurture Africa, a charity close to the heart of one of the leads, Eleanor O’Brien, who will be travelling to Uganda to work with them in July.

Read more about shows at the Lime Tree Theatre here.