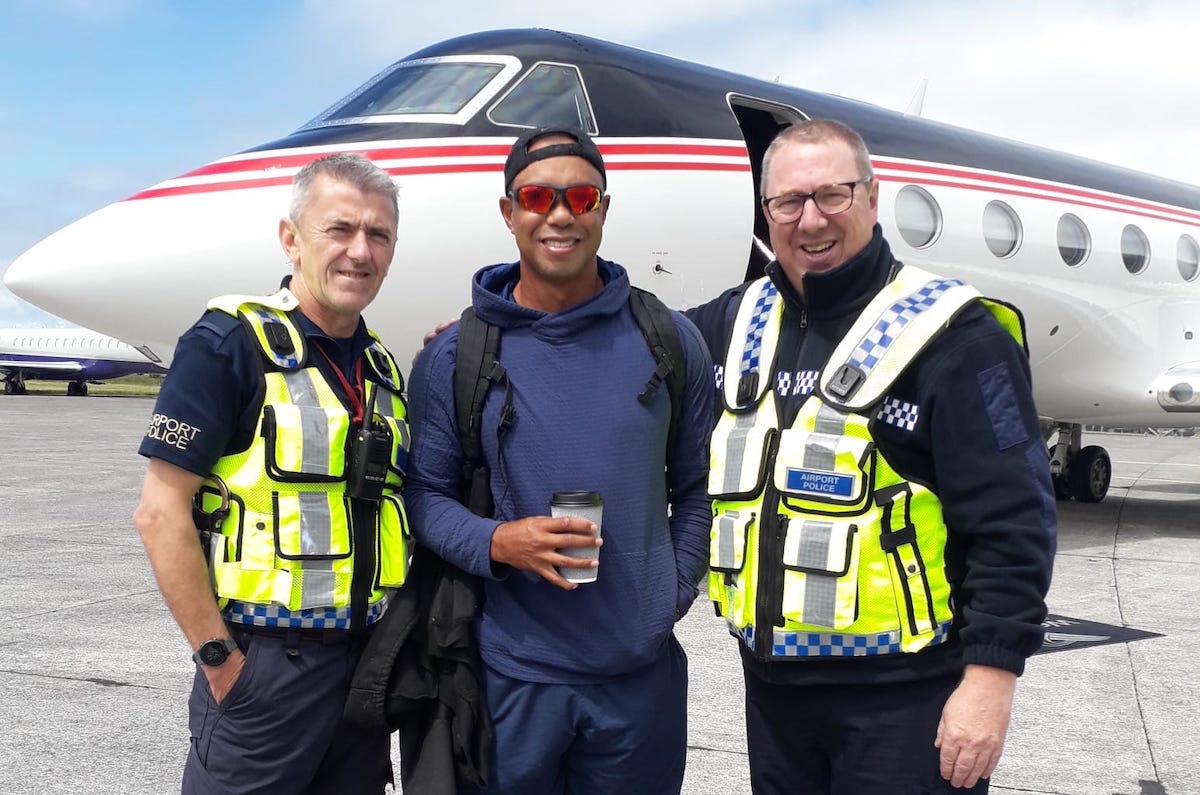 Midwest regional economy will see an upsurge after the Proam – On hand to meet the golfers as they used the Shannon Airport corporate jet services provided by the airport’s fixed base operators were, Shannon Airport Police Fire Service staff Declan Lynch and Eugene Fawl who are pictured here with Tiger Woods.

The excitement was palpable at Shannon Airport this week as thirty private jets carrying some of the world’s top golfers were welcome visitors as they landed at Shannon to participate in the prestigious, star-studded, JP McManus Pro-Am in Adare Manor.

Among the crème de la crème of the golfing world to touch down at Shannon were, Tiger Woods, Rory McIIroy, John Rahm, Jordan Spieth and Bryson DeChambeau. Many of the players had travelled from the US to take part in the event.

Congratulating JP McManus on the event, Mary Considine, CEO, Shannon Group said: “This event which has raised vital funds over the years for numerous charities in the mid-west, is also generating an economic benefit, not only for the local community in Adare, but also the wider Midwest regional economy. We were delighted to welcome players and golf enthusiasts to the airport and we know that the hospitality and accommodation sectors in particular are experiencing a significant positive bounce from the event. Organising a tournament of this magnitude takes huge commitment and hard work. JP and the McManus family, the tournament organisers, the team at Adare Manor Hotel & Golf Resort and the host of volunteers have done a tremendous job.”

The 2022 ProAm Full Fieldline-up means that 10 of the world’s top 11 ranked golfers are now confirmed for the sold-out event, which is also being broadcast live on Sky Sports, and The Golf Channel in the USA. The current holders of the four Major championships – Matt Fitzpatrick, Scottie Scheffler, Justin Thomas and Collin Morikawa are lining up, alongside the likes of 15-time Major champion Tiger Woods, former Irish Ryder Cup captains Padraig Harrington and Paul McGinley, four-time Major winner Rory McIlroy and 2019 Open Championship winner Shane Lowry.

Tournament host, Mr. JP McManus, is delighted to confirm the final professional 2022 ProAm Full Field of the charity event: “We’re privileged to be joined by the world’s greatest golfers; those who have achieved so much in their careers and some incredible personalities to augment the occasion. We’re looking forward to welcoming them to the redesigned Golf Course at Adare Manor, quite a few of them joined us in previous years but may not have seen the work Tom Fazio and his team have done to the course since. Let’s hope for a bit of sunshine to really make what we expect to be a very special couple of days in Limerick.”

For more information about the JP McManus Pro-Am go HERE