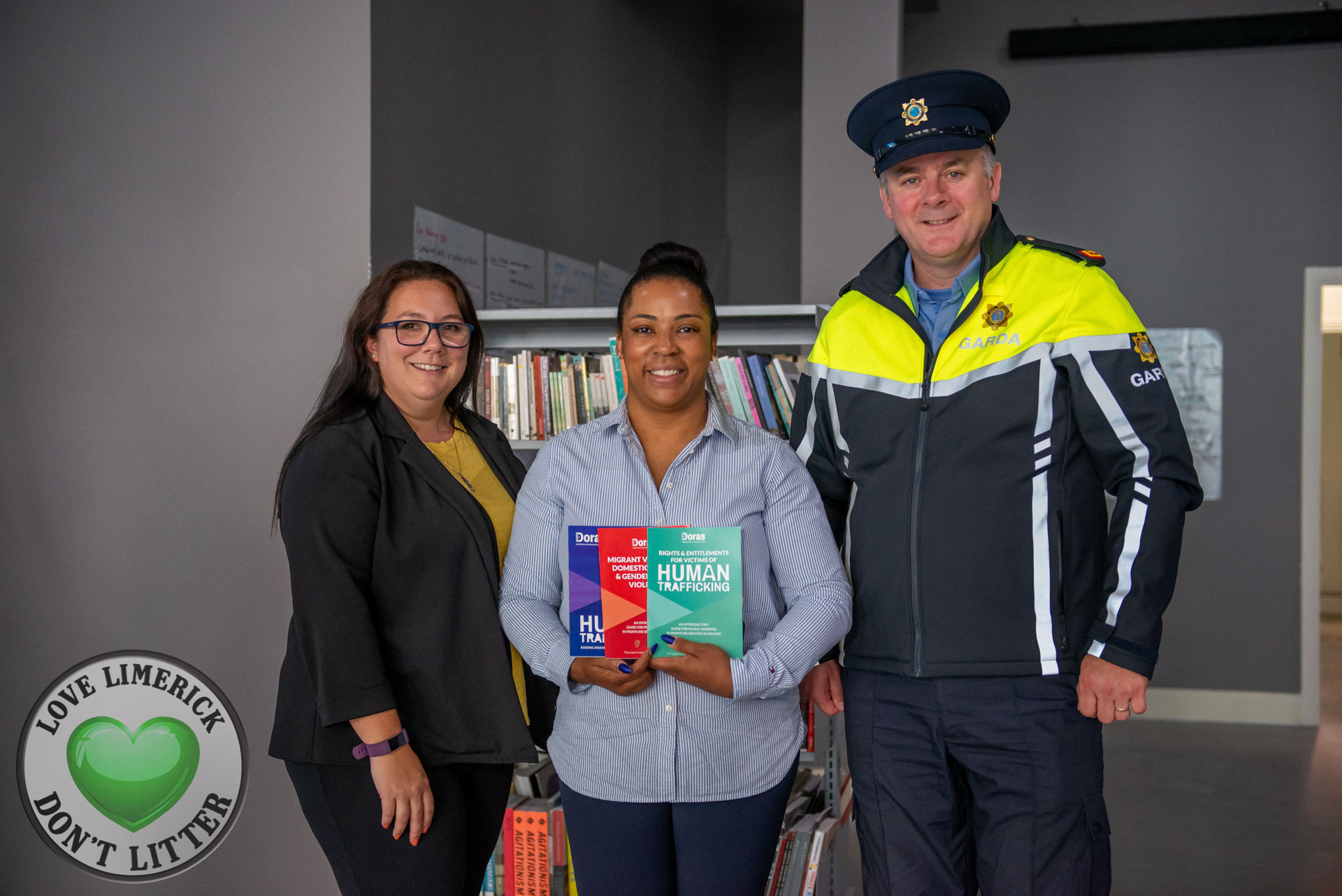 Migrant Victim Support Project – Doras Project Coordinator Donnah Vuma (pictured above centre) said “Victims deserve a system that protects and supports them from Day 1 and at every step of their recovery. Navigating the aftermath of a crime can be complex and each victim’s healing process can be different”. Picture: Olena Oleksienko/ilovelimerick.

The initiative is the first of its kind in Ireland and is a response to the growing demand to meet the complex and increasing needs of migrant and refugee victims of crime. The project was first developed to address the gaps there is in service provision for victims of crime who have special protection needs.

Refugees and migrants are less like to report crimes to the authorities due to their status. The project will work to overcome the significant barriers faced by migrants and refugees with regard to accessing justice and appropriate support services.

Doras CEO John Lannon said the Department of Justice-supported initiative is timely and much needed.

“All victims of crime need support, but we see first-hand how migrants, asylum seekers, and refugees often need specific and sometimes more specialised support. They may be victims of crimes such as human trafficking, racism, hate crime, gender-based violence (GBV), human trafficking, labour market exploitation, or modern slavery. Victims may not know where to turn for help and sometimes language, immigration, or cultural barriers are a factor. Certain groups are particularly vulnerable and already dealing with a complex range of challenges, including those who have fled their countries due to war or persecution. It can be extremely difficult for people living in direct provision or other challenging circumstances to seek help or know where to turn. That’s why this project is particularly important”.

Doras Project Coordinator Donnah Vuma said, “Victims deserve a system that protects and supports them from Day 1 and at every step of their recovery. Navigating the aftermath of a crime can be complex and each victim’s healing process can be different”.

She said the Migrant Victim Support Project will ensure that wherever a victim may be in their journey or wherever they are in the country, they have access to the help they need when they need it.

“A survivor-centred approach is fundamental to our work. There is no single approach in supporting the very diverse populations that comprise migrant and refugee communities across the country. Meeting the intersectional needs of these different groups is a challenge, we strongly believe in a multi-agency approach and that improving cultural understanding and sensitivity to the unique needs of migrant victims of crime is critical in making services accessible to them.”

Bulelani Mfaco, a founding member of the Movement of Asylum Seekers in Ireland (MASI), welcomed the launch of the new initiative.

“MASI has had to respond to cases of all forms of violence including sexual violence involving women and men who have come to Ireland seeking protection. Many refugees and migrants do not have the important family support they’d need when they experience violence, they can only rely on under-resourced NGOs. Supporting victims of crime needs to be at the centre of the criminal justice system’s response to crime. This is particularly true for foreign nationals who may have no one else in the state to rely on.”

Human trafficking is one area those involved are particularly keen to focus on. Ireland has continually been highlighted as one of the countries falling behind in this area. John Lannon says it’s a major concern to Doras and colleagues throughout the migrant sector.

“We’ve seen throughout Europe and Ireland how efforts have been made to exploit Ukrainian women and children as they flee war and devastation. There have been numerous cases highlighted in the media, including that of a teenage girl from Ukraine who was taken into emergency care in Ireland amid fears she had been trafficked into Ireland. Internationally, it is known that Ireland is not meeting minimum standards when it comes to tackling trafficking, although improvements are being made. It is our hope that the Migrant Victim Support Project will help make inroads in this area and to assist incredibly vulnerable people who need our support. We also hope that more organisations and agencies get on board as these are issues that connect into every area of Irish society”.

Doras takes on about 2,000 clients a year who are victims of crime. The Migrant Victim Support project has been in the works for some time and now that it has come to life it will be a safe space for migrants and refugees who are in need of help and support.

Doras is an independent national non-profit working to support and promote the rights of refugees, asylum seekers and migrants in Ireland, with one of their offices being based here in Limerick on O’Connell Street.

The organisation has been running for 22 years now.  Whether it be racism, hate crimes, domestic violence, sexual violence, human trafficking, enforced labour, employment exploitation, female genital mutilation, or gender-based violence, Doras is there wanting to help.

Limerick wins big at the Bar of The Year Awards