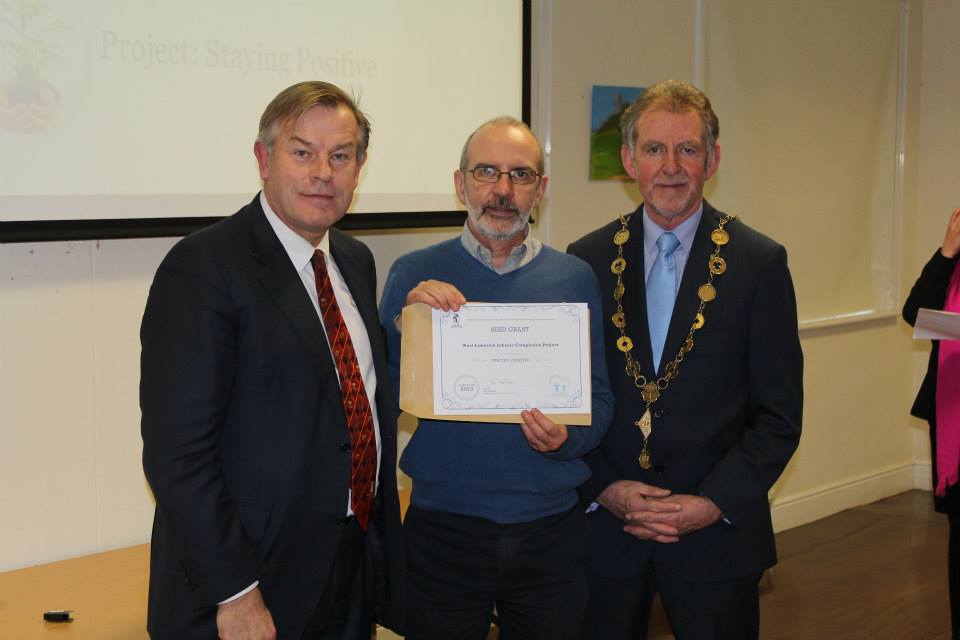 On Friday January 9th 2015, Milford Care Centre’s Compassionate Communities Project got off to a flying start for the year ahead, by awarding seed grants to community groups throughout the Mid-West.  The grant scheme, now in it’s third round of awards, invited applications for brilliant ideas that can make a difference to how communities engage with issues around death, dying, loss and care.

Dr Kathleen McLoughlin, Compassionate Communities Project Co-ordinator was delighted with the response to the call for projects and said “it’s wonderful how communities can get an idea off of the ground with just a small amount of funding that can make such a difference to other people”.  Mayor Michael Sheehan reflected on the importance of communities joining together to support people during difficult times, when people can be at their most vulnerable saying “Milford Care Centre’s Compassionate Communities project is reigniting the old concept of ‘Meitheal’ bringing people together to help each other through the difficult issues of death, dying, loss and care”.

The grants, which are matched with direct funding, or funding in kind, from community groups, have been awarded to the following projects:

Remembrance Garden for pupils and staff.

Art based project to safely explore death and bereavement and exhibition of work.

One day Working with Grief and Loss programme for volunteers provided by Milford Care Centre’s Compassionate Communities Project and purchase of books associated with death, dying, grief and loss for service users.

Therapy sessions for women using the prison and probation services specific to grief and loss.

Part funding toward the redevelopment of two areas in the hospital that will enhance the environment to brighten spaces associated with break bad news, death and loss.

Fifteen session programme ‘Staying Positive’ with a focus on bereavement, loss and grief for service users.

Maintenance of a garden on a site where babies are buried.

Improved seating area and garden within the graveyard.

Themed discussions leading to the development and performance of a play regarding advance planning.

A Garden of Reflection.

In addition to the awarding of seed grant funding, the Compassionate Communities Project also launched two new short films.  The films, developed by recent UL Computer Science graduates, known as ‘Bold Pup Media’ led by Killian Stone encourage people to think and talk about their wishes at the end of life.  Killian explains “We have really enjoyed working with Milford Care Centre to make these films.  We hope that they will help people to understand why it is important to speak more openly about death and dying and to share their wishes with others”.  The films will be used to engage community groups across the Mid-West to talk about issues associated with death, dying, loss and care.  Compassionate Communities Project Worker Rebecca Lloyd said ‘The films are so valuable as they can be shared across social media and shared at educational events for the foreseeable future.  They are a real addition to the ‘Let’s Talk Film Series’ developed by the project in 2012’.

The Chief Executive of Milford Care Centre, Pat Quinlan would like to thank the people of the Mid-West for supporting the work of the Compassionate Communities project.  He said “We can see here today the enthusiasm for this project across a range of different community groups.  The new films are absolutely excellent, and reflect how, by working in partnership with the University of Limerick we are able to develop new resources and in turn offer young graduates an opportunity to gain experience and knowledge in the field of death, dying, loss and care.  We wish the best of luck to the seed grant recipients and look forward to seeing the projects up and running later this year.

The next round of grant funding will open for submissions in September 2015.
Read more about Milford Care Centre right here! Or find them online at www.milfordcarecentre.ie