Pictured above: Minister Jan O’Sullivan, Principle of Ardscoil Mhuire Collete McGrath, and the senior students who were presented Gaisce medals by the Minister. 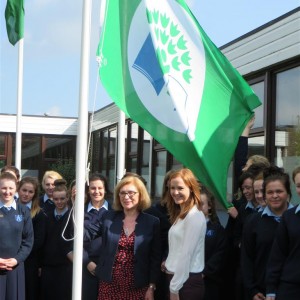 Ardscoil Mhuire was delighted to welcome back an old friend, as the new Minister for Education and Skills, Jan O’ Sullivan, dropped by on a very special day, on September 25 2014.

The Minister gave generously of her time to present Gaisce medals (the President’s Award) to a number of senior students and also awarded medals and bursaries to the school’s highest achieving students from this year’s state examinations.

Some environmentally conscious students were then on hand to watch the Minister raise the school’s very first Green Flag. The green flag is part of the international environmental initiative eco-schools, an environmental management and reward system, which recognises and acknowledges long-term, whole school action for the environment. The flag is awarded to schools that completed the seven steps programme toward a more environment friendly and conscious state, involving the entire school community. It was a special moment for these students as they were the ones responsible for this wonderful achievement.

The entire school community then assembled in the hall to meet the Minister. Minister O’ Sullivan spoke fondly of her long relationship with Ardscoil Mhuire and urged its students to continue the school’s long traditions of high achievement in academics and extra-curricular pursuits. The Minister received flowers as well as a standing ovation and the gratitude of Ardscoil Mhuire’s entire school community before leaving. 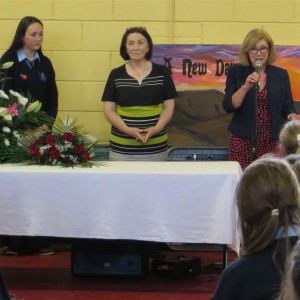 Minister O’Sullivan was appointed Minister for Education and Skills in July of this year, and previously served as Minister of State with responsibility for housing.

Ardscoil Mhuire is a Catholic school for girls situated in Corbally, Limerick, which aims to provide its pupils with a holistic education in the Catholic tradition.