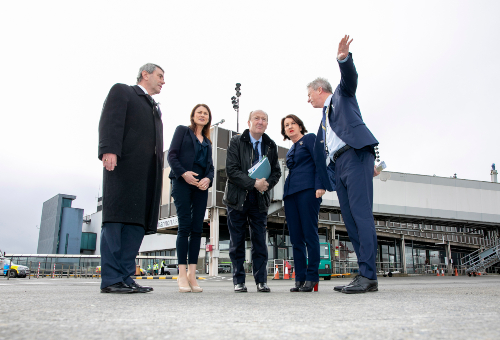 Shannon Group has today welcomed the engagement with Minister for Transport, Tourism, and Sport Shane Ross during his visit to the region.

During today’s visit, Minister Ross was given an update on Shannon Group’s businesses – Shannon Airport, Shannon Commercial Properties, and Shannon Heritage along with the work being undertaken by the International Aviation Services Centre (IASC) which supports the growing aviation cluster at Shannon.

Minister Ross also enjoyed a visit to Bunratty Castle and Folk Park where he was briefed on Shannon Group’s €8 million development plan for the iconic international tourist attraction.

Shannon Group Chairman Rose Hynes and CEO Mary Considine met with and updated Minister Ross on the success of the Group since its establishment in 2014. Included in the briefing was an update on the Company’s plans for continued investment which has already seen over €100 million invested across Group companies to date.  The Minister also received a brief on the challenges for the region and the need for additional supports to grow connectivity and infrastructure.

Commenting on the meeting Chairman Rose Hynes: “We had a very positive engagement with Minister Ross and took the opportunity to brief him on the growth so far of the Group and the challenges being experienced in the current year. It was also a very important opportunity for us to reaffirm with Minister Ross the potential of Shannon Group to act as a very significant driver of the regional economy and, by virtue of that, its ability to act as one of the key catalysts for the balanced national economy that the Government wants to achieve, as highlighted in the Project Ireland 2040 plan.”

Highlighting the potential role for Shannon Group in delivering Project Ireland 2040, Mary Considine, Shannon Group CEO, welcomed the increase in marketing supports to airlines in Budget 2020 as a first step but said that more needs to be done if the Government is to achieve its ambition on balanced national development.

“Enhanced regional accessibility is a key strategic outcome of Ireland 2040; supporting airlines in developing new routes must be a priority for Government if it wants to grow connectivity which is a critical enabler for FDI, Tourism and supporting our indigenous enterprise sector. Likewise, improving direct public transport connections to Shannon from our second-tier cities must be delivered if we want to create a counterbalance to Dublin and grow the Atlantic Economic Corridor”.

Ms. Considine also noted the need for progressive Government policies to ensure that key sectors for the region are supported.  “Strategic partnerships with and across Government departments should focus on investing in key sectors including Tourism and Aviation services as well as growth sectors for the region such as the Lifescience, MedTech and Connected and Autonomous Vehicles sectors”.

During his visit, the Minister also had the opportunity to see first-hand the significant investment that has taken place to date in the Shannon Free Zone to attract new tenants such as Jaguar Land Rover and Edwards Life Sciences. He also saw the new €18 million, 92,000 sq. ft. specialist aircraft painting hangar which is Shannon Group’s largest construction project to date and will be Ireland’s first aircraft hangar to be developed in almost 20 years.

The delivery of the new hangar is a key objective of the National Aviation Policy and was partly financed by a loan from the Ireland Strategic Investment Fund (ISIF).  The project is a significant development within the Aviation sector and provides an opportunity to accelerate the growth of this cluster at Shannon.