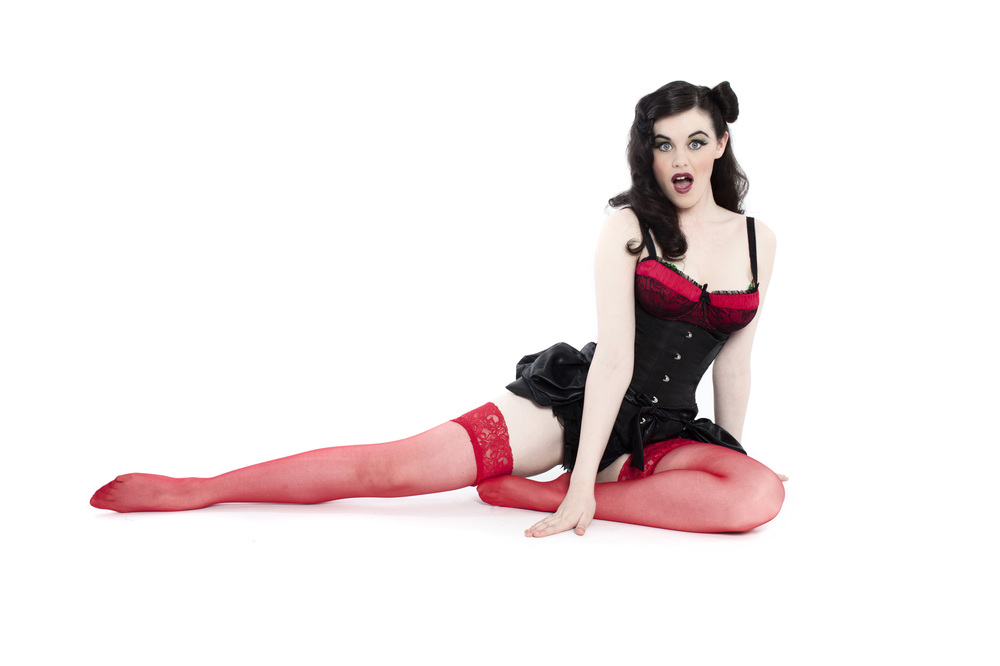 Miss LaVelle Opens Up About Cabaret and Burlesque in Limerick

Miss LaVelle Opens Up About Cabaret and Burlesque in Limerick

With Chez le Fab’s Cabaret and Cabernet club on the last Friday of every month becoming a sell-out, I needed to find out more. It seems like Burlesque and Cabaret shows are becoming more and more popular in Ireland and especially in Limerick. Between Chez le Fab’s Cabaret and Cabernet club and Santina Spitfire’s Deadliest Dames headlining the Limerick Fringe Festival, it seems like Limerick is getting in on this glamorous act. I met up with Laura, better known as the beautiful, comedic, Miss LaVelle, the host of Chez le Fab’s Cabaret in Cabernet. I wanted to find out more about Miss LaVelle, the world of burlesque and cabaret, and how Limerick can benefit from the new popularity surrounding Burlesque and Cabaret. 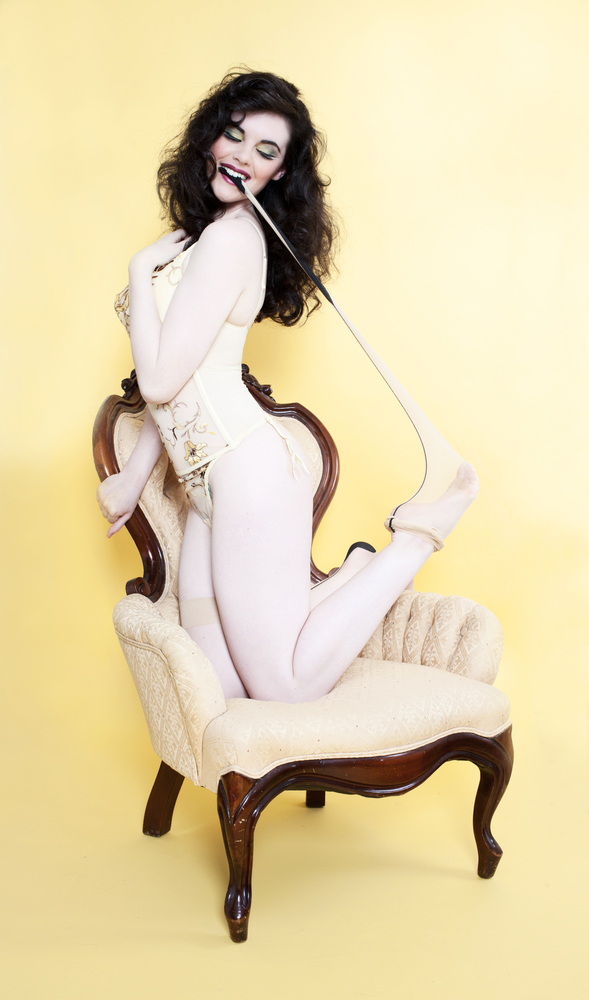 Miss LaVelle and I met in Chez le Fab as it seemed fitting to meet in the place which is bringing cabaret nights to Limerick. I had been nervous about meeting Miss LaVelle, but from the beginning, it was clear she was a very laid back, funny and down to earth person who welcomed my questions and curiosity about the world of Burlesque and Cabaret.

Where are you from originally?

I had noticed Laura (Miss LaVelle) had an unusual accent and wondered if she was actually a Limerick local. She laughed as she answered

“I get that a lot actually. I’m not American, that’s for sure! My parents moved to London in the 70s. My dad is from Mayo and my mum is from Limerick. They moved to London and I was born there and was there until I was 10. Then we moved back to Limerick and I actually went to Laurel Hill (School). I think the accent is a weird mesh of where I am from in London, like Wembley, and Laurel Hill. Everyone always mistakes me for an American, but I’m not at all! I’m living in Limerick at the moment and it’s great, I needed a bit of a break.”

Is the Burlesque and Cabaret scene hard to get into? Or is there a big community in Limerick surrounding Cabaret and Burlesque?

“Not in Limerick, but to be fair I have been away for a while. I’m only starting to scratch the surface in Limerick now. I studied in UL but I was working in London to pay for it, so I was coming back and forth. I was 18 when I moved to London permanently and I’ve been going back and forth so I’ve only just come back now. I’m only beginning to see who is out there so I’m hoping that through these Cabarets and Open Mics especially that they’ll all start coming out of the woodworks and that they’ll find me.” 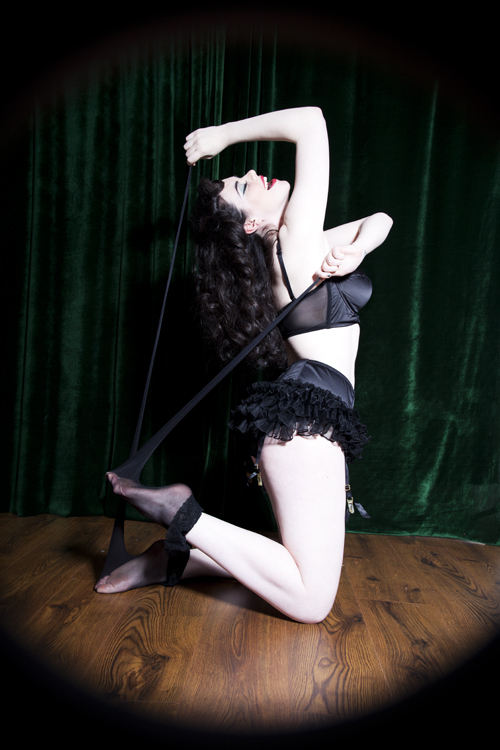 So how did you get involved in Burlesque?

“I think it stemmed from the fact that I am quite pale. Going out in Limerick, everyone was fake tanning and I just felt like it didn’t suit me at all. I guess I got into Pin-Up at first. My Mum got me this book from TK Maxx that had loads of old Pin Ups in it and I started doing the winged eyeliner look from them. I thought it was cool and started matching it with the red lipstick and got a lot of compliments like ‘oh it suits your hair and your skin colour so much’. Then I came across Dita Von Teese and I was sold. I saw the glamour and the rhinestones, the glitter and I just knew I wanted to do it too.”

When was your debut in Cabaret and Burlesque?

“Uhm… I must have been like, just turned 21 and I’m 26 now. I was doing a course in London in Soho. The school was called Burlesque Baby. They teach you the basics and how to create a name and an act and there is a debut show at the end of it where you bring all your friends and family to the show. I can’t even remember where it was on now. I was so nervous It’s just a blur. All I remember is I was first on and my aunt was in the audience and my cousin and I thought ‘oh my god, I don’t even know if she knows what I’m doing!’. She couldn’t even get acclimatised to it either because I was first on! It was good though.”

What is it like being in such a vulnerable yet elegant position on stage?

“It looks elegant and glamorous but it’s not at all. I try to be elegant and poised and I always try to add humour to my act. There are dancers who are incredibly sensual but it’s beautiful and it’s gorgeous. I feel like I don’t have that in me. Sometimes I can be to do more sultry acts but I just have to add the humour. It breaks the tension and it really is needed here in Chez le Fab as it’s such an intimate venue, it’s a little intense. Friends of mine who I have known for a while might be a bit awkward or shocked but the humour lightens it up a lot.” 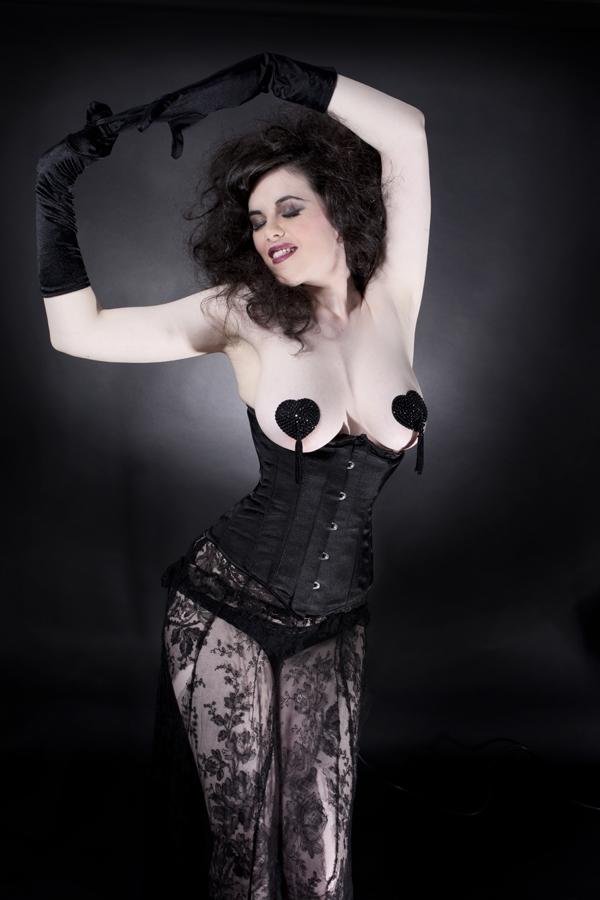 How did they Cabaret and Cabernet Night’s start in Chez le Fab? Did you play a part in setting these up?

“It was actually awesome how these happened. I said I’d come back to Limerick to take some personal time out. I was nervous because I was so unfamiliar with the burlesque scene in Ireland, I was anxious because I didn’t know anyone. I said it to my friend Jenny Browne who is actually a dance teacher in UL and she was like ‘oh I don’t know anyone in Limerick but I know this show called The Dirty Circus in Galway’ so I called Tommy from the dirty circus and I gave him the big speel. He already knew who I was so that was sweet. He had actually asked me to perform once or twice before but I was always in London. Around the time I rang him he was doing The Dirty Circus in Dolan’s and it was the first time they had booked the Warehouse and he was obviously looking for Limerick performers. So I showed up anyway and Lesley (of Chez Le Fab) was actually backstage giving Burlesque a go as well and we just hit it off from there. She kind of knew who I was as well and wanted to talk to me. She was always doing the Vintage Fairs in Castletroy Park Hotel and she said she would love to have me involved in that and we would do some dancing or something. Obviously, it wasn’t to the stage of nipple tassels and that because it was afternoon tea! It kind of took off from there. When I saw she had gotten Chez le Fab and that she had a stage I just knew that Cabaret had to happen! It’s the perfect spot and a lot of it is quite intimate too. I like that I can involve the audience.” 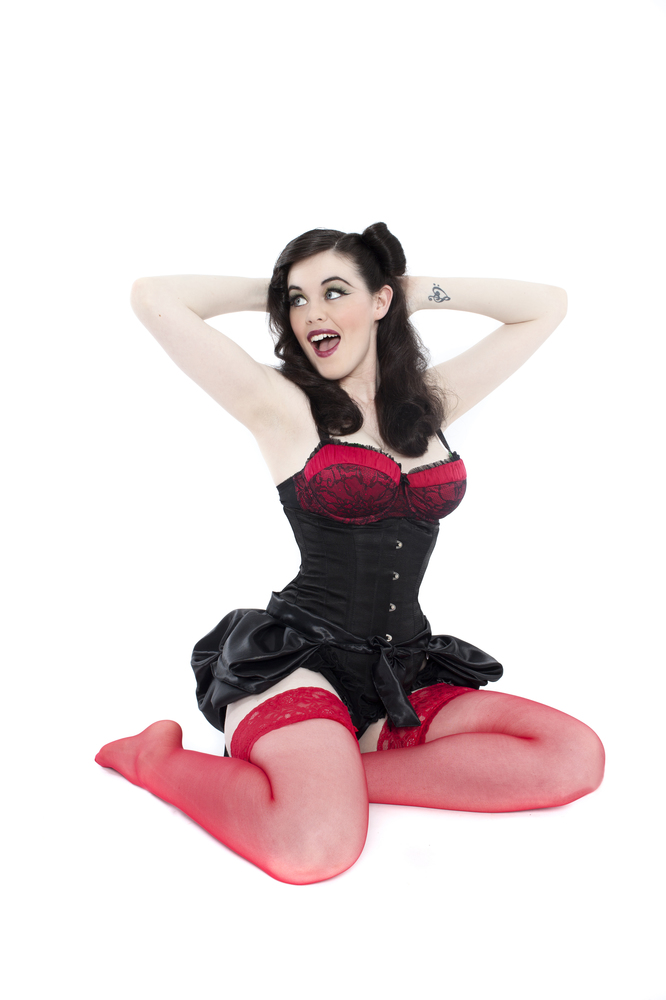 Are the audiences positive about the act? What’s their reaction in general?

“Yeah, they seem to be into it. They’re a little sceptical, there’s sometimes shocked faces but shocked in a good way mostly, some people don’t expect it at all. It goes back to the body positivity, by being so bare and putting yourself out there and on show, the audience are made more comfortable and that maybe even gets them thinking about doing it themselves, people sitting in the audience like I once was thinking ‘I want to do that’ and they might join in.”

There’s a big movement with Cabaret and Burlesque surrounding body positivity, would you be an advocate for this?

“Oh absolutely! 100%! It’s the reason why I do it for myself. We all have things we hate, but then when I put everything out there, what are you gonna do? There it is! Everything is there and it is what it is. Some days then you might have a cut or a bruise or something awful and it’s tough but, what can you do? The show must go on! It’s great for your own confidence and self-esteem. I’m huge on the body positivity and self-love in general. Especially in the age we live in it is very superficial and it’s incredibly fake. Now, I’m not saying I’m not somewhat fake because I am dolled up in a way with my feathers and rhinestones but there’s something very raw about it. These people are bearing their souls almost and giving it to the audience and I think that makes the audience more comfortable as well.”

For anyone who wants to start doing cabaret or burlesque themselves, what advice would you give?

“I would say to be patient. I feel like, it’s not going to be the most show-stopping costume or the most amazing act and amazing execution until you really become the act. Until you really know every single bit, piece and part of you. Until you really know yourself and your body, it won’t be what you want it to be. That’s what I’ve learnt anyway. Personally, I’ve no patience at times and I just want everything to be incredible straight away, and it’s not like that. It takes time. It takes getting to know yourself. When I began I was very into the Pin-Up style but I was trying to keep it sexy too but I also wanted to keep it traditional. It wasn’t until a bit later that I realised I wanted to keep it funny and be a bit more humorous. A lot of people in cabaret can be a bit invasive and overly sexual, some cabaret shows can be a bit uncomfortable, but I was never really into that. When I was doing a show or when I was working in a place where I had to do acts like that, it made me a bit uncomfortable too, it just wasn’t what I was into. I wanted to keep things more like the 40’s and 50’s prohibition type act. I’m not saying there isn’t a bit of a naughty side to it but now in the modern times, you can take your act in any direction. I’d tell people who want to try out cabaret that they need to find their own style and to be patient.” 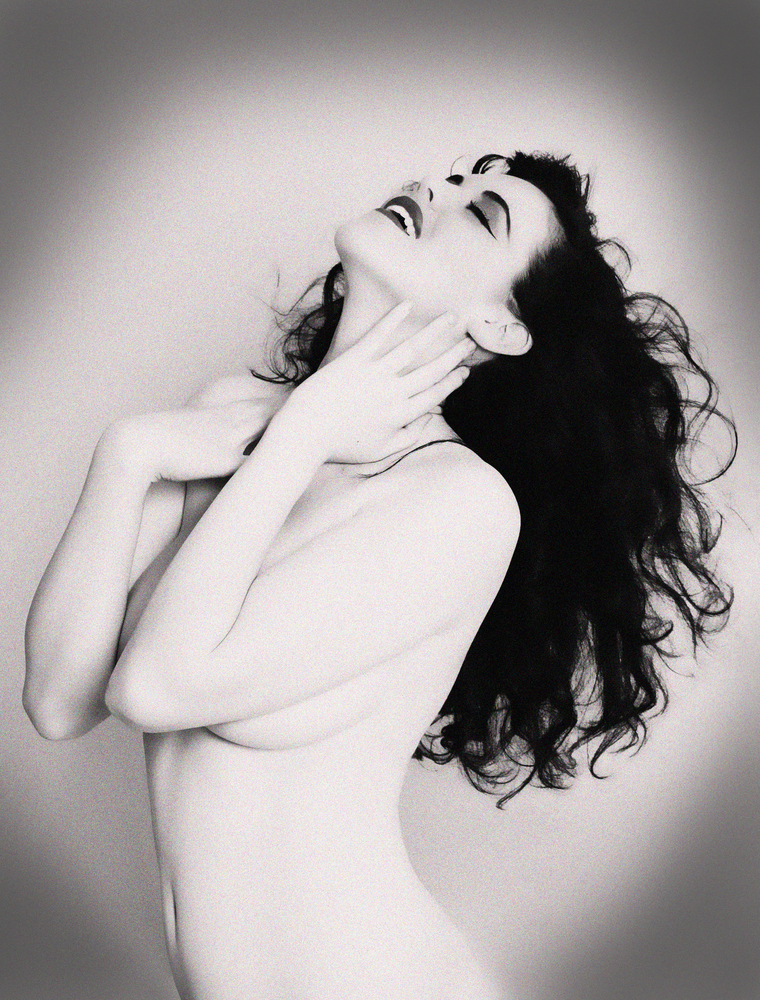 Miss LaVelle went on to speak about how positive her experience of the Irish Burlesque and Cabaret community has been. She said “They’ve been so inviting and supportive and helpful. Obviously, females have a reputation for being quite mean to each other, especially in the industry and in dance, anything to do with looking glamorous. They were honestly just the nicest people to me and got me kick started and flying back into work here in Ireland”. With Burlesque and cabaret becoming more and more evident in Limerick, we wish Laura all the best with her upcoming shows and performances at Chez le Fab’s Cabaret and Cabernet and hope that Limerick will soon have an established Burlesque and Cabaret community.