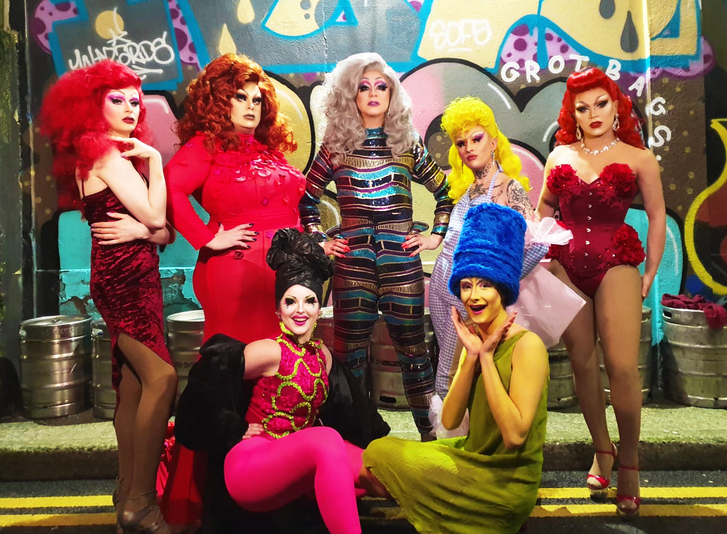 Mockie Ah – A tour-de-force of camp, comedy, absolute bangers and sparkling sequins, the group will be hosting a club-night at Pharmacia Bar

A tour-de-force of camp, comedy, absolute bangers and sparkling sequins, the group will be hosting a club-night at Pharmacia Bar on May 10th. The legendary Haus was founded in 2017 as a response to the lack of queer spaces by leading Irish drag artist Candy Warhol (Comedy Central’s Dragony Aunts) who will be hosting on the night. Special guests include Mia Gold and Limerick’s Miss Lavelle. The Cork City based collective have gone from strength with regular national cabaret shows, club-nights and appearances across Europe. In 2019 the queens were featured on Ireland AM’s pride special and in 2021 a critically acclaimed documentary focusing on the group, ‘Kin Of Kweens’ , was broadcast on RTÉ. The group was later featured on BBC’s Travel Show where they were highlighted as a top Irish attraction.  Mockie Ah is a celebration of all things camp, queer and nostalgia. It is a safe space where everyone is welcomed, loved, embraced and covered in glitter!

Candy Warhol said ,”As a former Limerick Art School student, I can’t wait to return to where it all began for me over a decade ago. Limerick City has always been rich in culture and diversity and we hope this is the first of many events for us. I recently hosted LSAD’s ‘Runway to Drag’ show and have invited the top two finalists to join us on stage this coming Tuesday. We are hoping we can offer a stage for new drag artists to perform and a space for everyone to dress up and come enjoy themselves. That’s what Mockie Ah is all about.”

The queens will also be joined by nationally renowned DJ NATMAC who will be playing a mix of Disco, Electro and 80’s/90’s/00’s pop. Guests are encouraged to dress up and a runway battle for best look will take place for ‘Queen Of The Night’.

Mockie Ah plays Pharmacia Bar on Tuesday, May 10 from 10pm.

For other LGBT stories go HERE