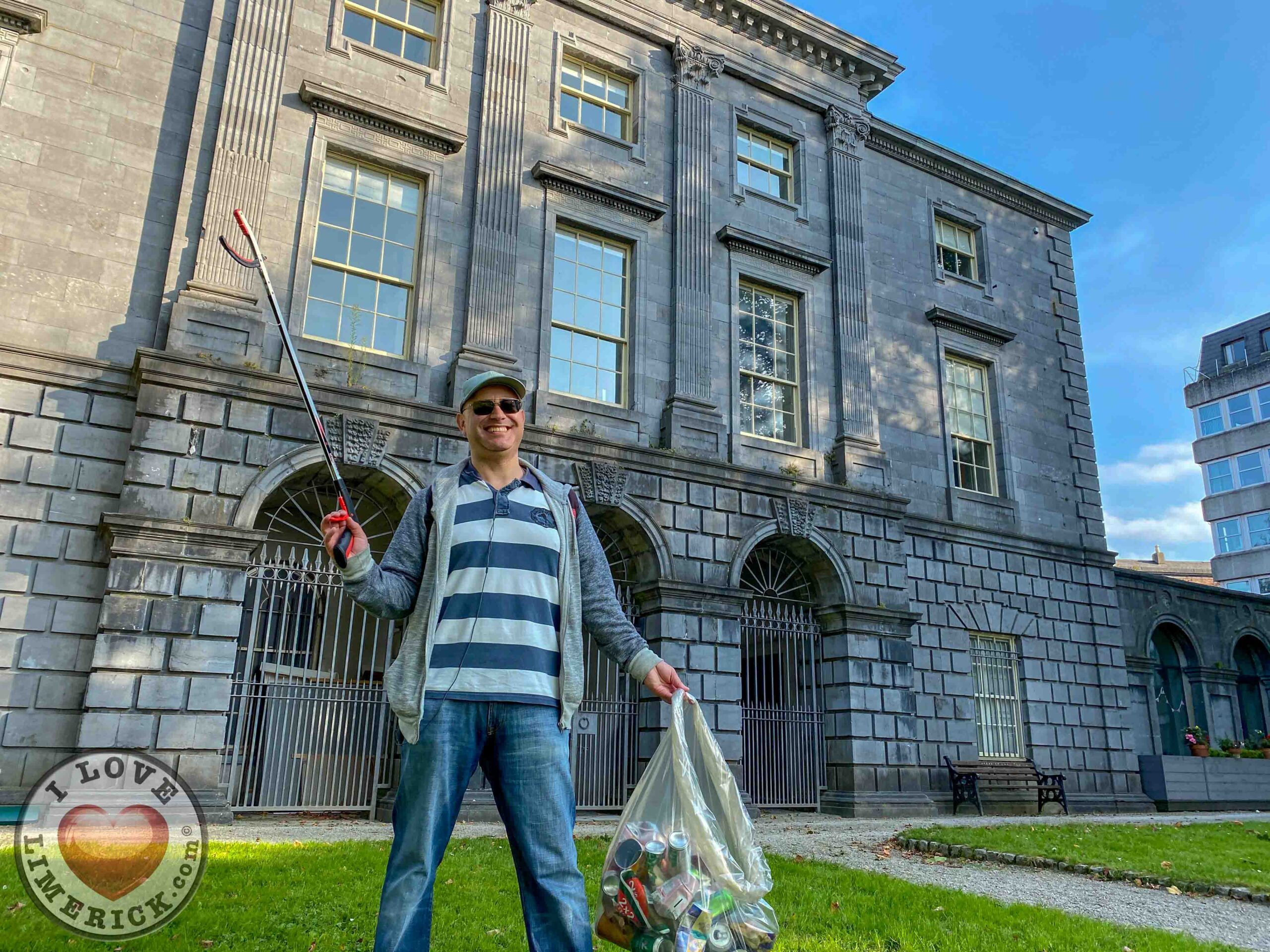 Mohamed Ferhat is a Limerick Tidy Towns and Team Limerick Clean-up volunteer in Limerick city. Throughout lockdown, bad weather, and scorching heat Mohamed is out with the other volunteers cleaning up Limerick.

Mohamed who is originally from Algeria, is a very proud Irish citizen who came to Limerick after the death of the Celtic Tiger in 2011 to pursue further education and achieved his Degree in Art and Design. He has a lot of love for Ireland and especially for Limerick and wants to make his beloved city a cleaner place to live.

Mohamed had been out picking up the waste on his own time. One day as he was cleaning, he met a Team Limerick Clean-up (TLC) volunteer who was equipped with bags, gloves, and a picker and started chatting with Mohamed. By the end of the conversation, Mohamed had been handed a litter-picker, vest, and a schedule and had become part of both Team Limerick Clean-up and Limerick Tidy Towns, the two organisations helping to clean up Limerick.

Mohamed told us, “I was passing under The Shannon Bridge and I met a gentleman from TLC who was well equipped with bags, gloves, and a picker. I started a conversation with him, and by the end of it, he had given me a litter-picker, plastic bags, a vest, and gloves, and I started that very day.”

Mohamed has a love of all things nature and believes in keeping the city clean so future generations can truly experience the beauty of nature in Limerick City.

During Covid-19, Mohamed found an opportune time to clean the riverbank from the Shannon Bridge to the end of Condell Road. He didn’t have to worry about contact with other people and so he began the task of pulling plastic from the riverbank, sometimes completely alone and other times with the help of friends.

Mohamed told us of the trouble they have with some of the rubbish that has been dumped, saying, “I picked plenty of plastic and waste from the river. Sometimes I got help from my friend who is also part of the TLC team. Sometimes the waste is too heavy to pick up, we find fridges, road panels, plastic bins and sometimes even tires. All that waste would go out to the sea if it weren’t removed.”

Despite the selfless work that Mohamed is doing he still finds himself on the receiving end of nasty comments made by people who see him out with a bin bag and a litter picker and feel it’s ok to make fun of him or look down on him because he is picking up rubbish. However, Mohamed won’t let their comments or mean words deter him from making the city a cleaner place to live saying, “I don’t mind the comments, the majority of the hecklers are young or have less knowledge about the risk of plastic and waste threatening the planet and the atmosphere.”

Meet Limerick hero Mohamed Ferhat. He is a @LmkTidyTown and @TLC_Limerick Up volunteer in Limerick city. Throughout lockdown, bad weather, and scorching heat Mohamed is out with the other volunteers cleaning up Limerick. #ilovelimerick #lovelimerick #lovinlimerick pic.twitter.com/mGA06uFuKu

The thing that Mohamed loves most about his work is the words of gratefulness and encouragement that he receives from people who pass by and see him working. He also loves to see the city clean and tidy, seeing it clean motivates him to keep it clean.

Maura O’Neill of Limerick Tidy Towns a fellow volunteer tells us, “Mohamed joined the Limerick City Tidy Towns Sunday crew at one of our regular twice-weekly litter picks about a year ago, and since then has been a hugely valued member of the team. As well as joining the normally scheduled litter-picks, Mo goes out most days on his own, sometimes for hours on end, and covers all areas of the city. He sends videos and photos of his routes and the results of his work back to the Tidy Towns WhatsApp group to keep us informed of his whereabouts and where he has covered and we are in awe of his commitment to Limerick city and to the environment, and his huge dedication and hard work. His diligence during lockdown was particularly impressive as he almost single-handedly cleaned the riverbed off the Condell Road, which was within his 2k limit.”

“We of course value all of our wonderful volunteers, without whom we would be unable to function as a group and to achieve what we do, but Mo stands out above the rest, not only for the work he does on the ground but also for his ideas with regard to projects for our national Tidy Towns application, which are particularly welcome given his background in graphic design. He is hugely proud to be a part of our group and to do what he does for Limerick, and we in turn are very proud and privileged to have him as part of our team.”

Well done Mohamed! You are a credit to Limerick and we are all so grateful to you! Mohamad Ferhat

Team Limerick Cleanup and Limerick Tidy Towns are great organisations and could always use more volunteers!