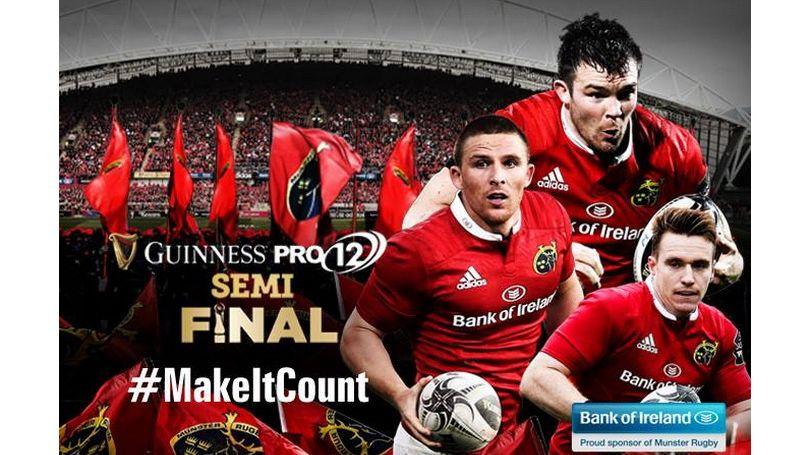 Munster Get Set to Face Ospreys in Pro12 Semi-Final

Munster Get Set to Face Ospreys in Pro12 Semi-Final – History is on the Red Army’s side as home teams have a 100% record in Pro12 semi-finals to date.

Munster Get Set to Face Ospreys in Pro12 Semi-Final

Munster will look to book their place in the Pro12 final this Saturday when they face off against Ospreys at Thomond Park.

Sell outs are quite rare for semi-finals and hundreds of Welsh fans are expected in Limerick for the big game which kicks off at 6:15 pm on Saturday.

History is on the Red Army’s side as home teams have a 100% record in Pro12 semi-finals to date. Munster finished top of the league and should they win, they will face either Leinster or Scarlets at the Aviva Stadium on Saturday, May 27.

Irish Players’ Player of the Year Conor Murray is expected to return to the side from a recent shoulder injury, which is a major boost for the Province.

As part of their Thomond Park ritual, Munster Rugby Supporters Club members will hand out 4,000 free flags to attending fans, accommodate Oscar the mascot, muster up members for the supporter’s club choir and provide pre and post-match entertainment.

Commenting on the big game, MRSC public relations officer, Mark Meehan said: “Ospreys confrontational side will make for a tight encounter between the two teams. No matter what happens, it has been a great season.”

Best of luck to the side when they face Ospreys this Saturday at 6:15 pm!

John Burke is the First Co. Clare Man to Reach the Top of the World