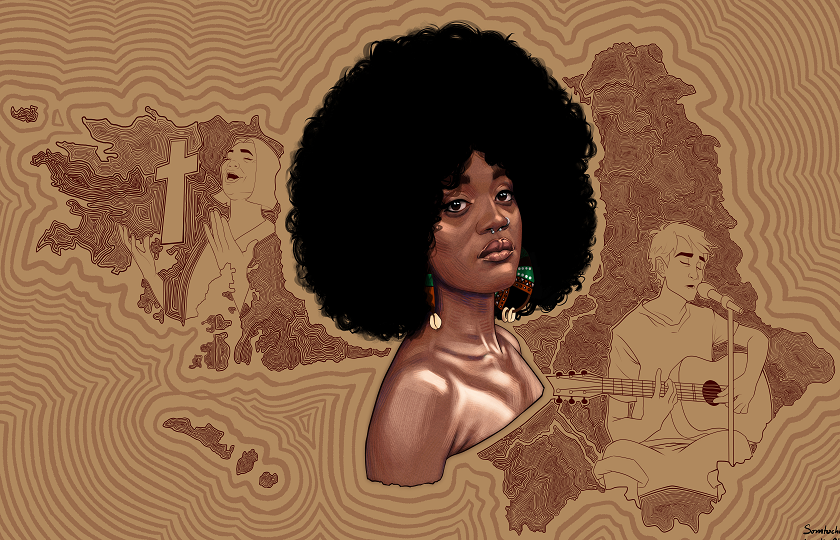 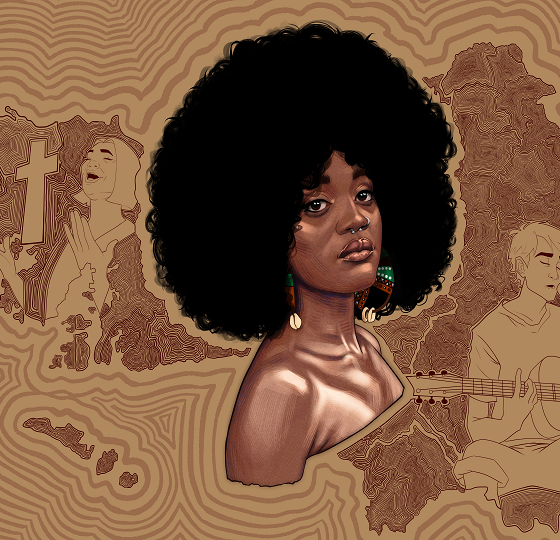 Music, Memory, and the Night – an image by visual artist Somto Amadi-Obi pictured above

‘Music, Memory, and the Night’, an audio-visual virtual event centred on musical memories of nightlife in Galway and Cork, launched as part of a research project led by Dr Ailbhe Kenny, lecturer in music education at Mary Immaculate College (MIC), and Dr Katie Young, a postdoctoral researcher at MIC.

The event brings together four musicians and four visual artists from Black-Irish, Afro-Irish and African diasporic communities in Ireland who collaboratively explore musical memories of night spaces in Galway and Cork – spaces such as clubs, live music venues, cultural centres, and more that have been forced to close over the past year because of COVID-19 restrictions.

As part of the project, each musician made an audio recording of memories in Galway and Cork at night in which they recalled the sights, sounds, smells, colours, and feelings of those night-time spaces through poetry, music and story. In response, visual artists created commissioned artworks that range from digital artwork to canvas paintings based on each of the musicians’ sonic memories.

According to Dr Ailbhe Kenny, “By profiling Black Irish musicians and artists, ‘Music, Memory, and the Night’ hopes to expand the often-limited portrayals of nightlife in Ireland to include a greater diversity of experiences and artistic lenses. Both the finished artworks as well as the memories through which each artwork emerged reveal layered, intersectional experiences of music in the night in both Irish cities.”

For rising star Tolü Makay, her experience of nightlife in Galway city opened her up to a world of new possibilities. The Afro-Irish singer, who was born in Nigeria and raised in Tullamore, grew up in a Christian household and says, “Going to uni you get to see new things and being in Galway it was just so vibrant at night-time. It definitely gave me a new view of life and how music is played and seen outside of the bubble of Christianity or religion.”

Her memories of music and nightlife in Galway city are reimagined in the artwork of visual artist Somto Amadi-Obi. According to Tolü, “I chose to be part of this project to share a piece of my story along with Somto who is an incredible artist that I respect. Being paired with him and knowing how skilled he is, as well as growing up in similar settings, I was excited to see how he’d link our worlds together.”

‘Music, Memory, and the Night’ forms part of the HERA-funded NITE Spaces Project, which aims to assess how night spaces are dynamically produced, imagined, experienced and narrated by migrant communities in eight European cities, including Cork, Galway, Aarhus, Amsterdam, Rotterdam, Berlin, Lisbon and London. The project is led by the University of Leiden in collaboration with MIC, University College London, Humboldt University and Aarhus University with research teams across Europe exploring diverse nocturnal experiences in each of the eight cities.

The Irish research project, led by Dr Ailbhe Kenny and Dr Katie Young from MIC, has focused on how Afro-Irish and Black musicians in Cork and Galway develop, negotiate, sustain and potentially transform their communities, practices and identities through music-making at night. Commenting on the findings of the research project so far, Dr Kenny said, “Research is revealing night-time music-making as political, as migrant and diasporic communities navigate, complicate, and defy preconceptions of who is ‘out of place’ and who is ‘in place’ within night-time cultural spaces. These are both subjective and communal experiences that highlight how such music-making is shaping new and future musical night spaces within Irish cities.”

The research has also revealed how night spaces can create meaningful integration opportunities through shared music-making and performance. It has shown that night spaces are important sites of community solidarity and growth and revealed how nighttime culture can help to create spaces of belonging and intercultural understanding. According to Dr Kenny, “The musicians involved in the research perform alongside a broad community of musicians that are cross-genre and ethnically diverse. Their musical night spaces thus become spaces of encounter and interaction.”

‘Music, Memory, and the Night’ is supported by Galway 2020 European Capital of Culture.

For for information on ‘Music, Memory and the Night’ go HERE