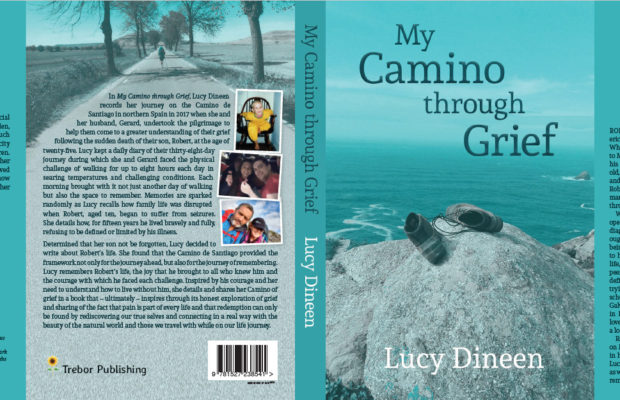 My Camino through Grief is launching Friday, May 17 at the South Court Hotel

Lucy Dineen, who works in social care, is a native of Shanagolden, County Limerick. She spent much of her life living in Limerick city with her husband, Gerard and two children. Following the sudden death of her son, Robert, she and Gerard moved to County Clare where they now live. My Camino through Grief is her first book.

Lucy told ilovelimerick about My Camino through Grief, “This book is about my struggle with grief following the death of my only son Robert, who died suddenly at age 25. Robert suffered with mental health issues. Fear and anxiety were always a dark shadow lurking behind him, his fear manifested in seizures which he referred to as his monster.”

On May 2015 Robert died suddenly after one of his seizures. Despite his illness, Robert achieved many of his goals, including graduating from NUIG just months before he died. Lucy said, “His courage and strength and his ability to reach out to others, inspired me to write his story.” This book inspires through its honest exploration of grief and loss and of how one woman journeys to find the way forward. In My Camino through Grief, Lucy Dineen records her journey on the Camino de Santiago in northern Spain in 2017 when she and her husband, Gerard, undertook the pilgrimage to help them come to a greater understanding of their grief following the sudden death of their son.

Lucy continued, “After Robert’s death I took 6 months out of work and embarked the Camino de Santiago journey. I walked with my husband Gerard for 38 days. During this time while walking, it gave me the head space to explore my thoughts and feelings and this terrible new situation we found ourselves in.” Lucy kept a daily diary of their thirty-eight-day journey during which she and Gerard faced the physical challenge of walking for up to eight hours each day in searing temperatures and challenging conditions. Each morning brought with it not just another day of walking but also the space to remember. Memories are sparked randomly as Lucy recalls how family life was disrupted when Robert, aged ten, began to suffer from seizures. She details how, for fifteen years he lived bravely and fully, refusing to be defined or limited by his illness.

Determined that her son not be forgotten, Lucy decided to write about Robert’s life. She found that the Camino de Santiago provided the framework not only for the journey ahead but also for the journey of remembering. Lucy remembers Robert’s life, the joy that he brought to all who knew him and the courage with which he faced each challenge. Inspired by his courage and her need to understand how to live without him, Lucy details and shares her Camino of grief in a book that ultimately, inspires through its honest exploration of grief and sharing of the fact that pain is part of every life and that redemption can only be found by rediscovering our true selves and connecting in a real way with the beauty of the natural world and those we travel with while on our life journey.

During the walk, memories and thoughts came flooding back into Lucy’s mind. These were sparked along the way by the sights and sounds and situations she found herself in. Lucy concluded, “At the end of each day I wrote in my journal and by the end of the Camino I realised I had enough to fill a book. So I thought what better way to try and immortalise my son than by self-publishing a book.”

Lucy is launching My Camino through Grief on Friday, May 17 at The South Court Hotel, starting at 7.30 pm.

For more information and to pre-order the book visit