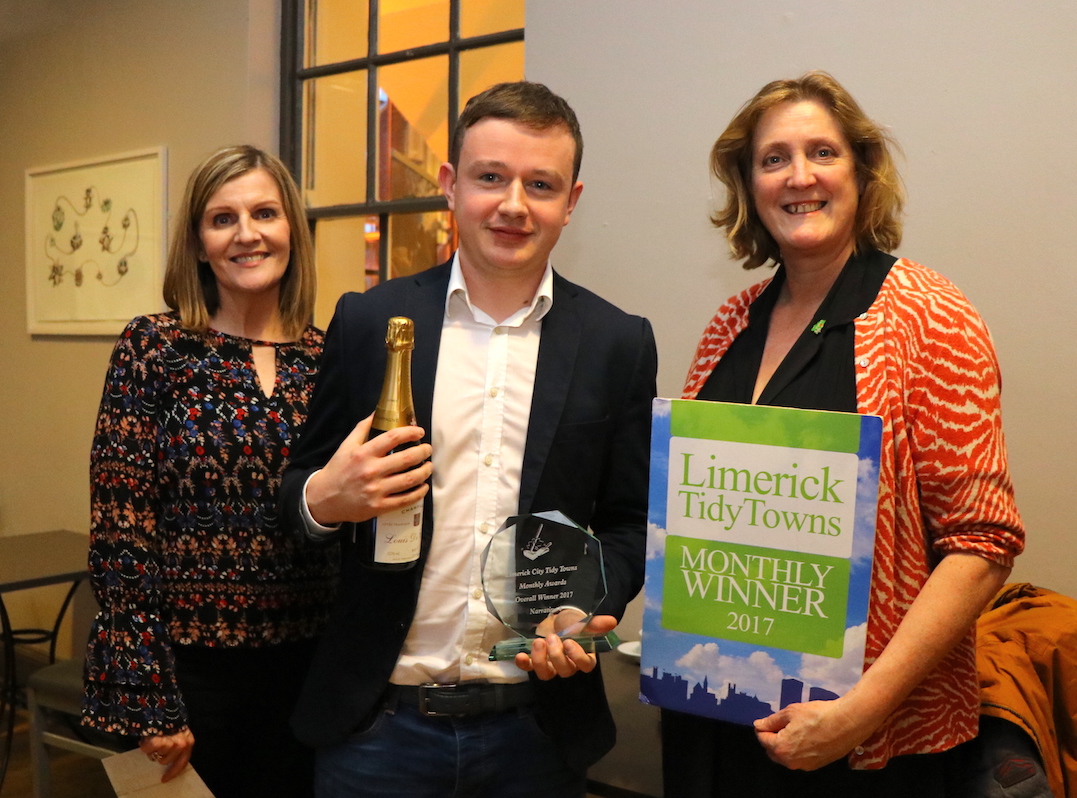 There was a great turnout of representatives from the eleven 2017 monthly award winners, along with previous overall winners, Limerick City Tidy Towns volunteers and committee members. Sharon Slater spoke at the event and thanked everyone for coming. She emphasized that they were particularly proud this year to have won a bronze medal in the 2017 National Tidy Towns competition which was greatly encouraging and partly down to all the monthly winners and volunteers present, stressing that if everyone took as much pride in their own premises as they all do in theirs, then who knows, we might eventually win gold!

Sharon mentioned that the Tidy Towns volunteers have continued to see improvements in the city year on year since they first started in 2014, and 2017 had seen yet more new units and retailers arrive, as well as progress in developments relating to Limerick 2030 such as the Hanging Gardens site.  However, while the future is bright and it’s great to see cranes in the skies over our city again, it is vital to keep the present city looking as well as possible until those plans come to fruition and there are still plenty of challenges to face.

Sharon then briefly summarised each of the monthly winners, and why they were chosen, starting with the overall winners Narrative 4 who won in January.  The wonderfully sympathetic redevelopment of their building on O’Connell Street deserved to be recognised, and following that, they have also done great work on improving their basement, which is something Tidy towns were particularly pleased with, given that they had a special “name and shame” campaign in 2017 to deal with problem basements.

The basement winner was indeed Bluebird Care who won in June for their basement at Hibernian House, Henry Street which Tidy Towns volunteers had spent many hours cleaning in the past, so were particularly heartened to see how beautifully it has been developed and maintained since then.

As well as recognising newly redeveloped properties, Tidy Towns also gave awards this year to long-established well-known Limerick retailers for maintaining consistently high standards over many years, namely Billy Higgins Menswear on Sarsfield Street in April, O’Connells Butchers on Little Catherine Street in August and Amee’s Boutique on Cecil Street in November.  The reputations of these businesses speak for themselves and prove that it is just as important to encourage and reward consistent and long-standing high standards as it is to mark new developments and refurbishments.

The May winner was in fact both a long-standing Limerick business and a redeveloped property, being Enzo’s on William Street, which was transformed by their lovely new fit-out and traditional signage.

Last year also had a first petrol filling station and forecourt award winner being the February winners Casey’s Londis Mount Kenneth which transformed what was a previously derelict site and a terrible eyesore on one of the main routes to and from the city.

While the Tidy Towns monthly awards usually try to focus on smaller businesses and units, this year they couldn’t overlook No 1 Pery Square Hotel, who won in March.  They were chosen as the Georgian Quarter winner, and it was remarked that the beauty of the building is enhanced by the work carried out in the area by the South Limerick Residents Association.

Only one public house was selected this year, being The White House at the corner of Glentworth Street and O’Connell Street who won in July not only for the striking redevelopment of such an established Limerick pub, but also for allowing Limerick Tidy Towns to have regular committee meetings there, and indeed for kindly hosting last year’s awards event.

The October winners, Nellys Corner on Nicholas Street were nominated by a member of the public and received their award not only for rejuvenating this prominently located unit, but also their support for plans to breathe new life into this very important part of Limerick’s medieval quarter.

The joint November/ December winner was Brown Thomas for their wonderful Christmas lights display which is a huge part of why Limerick’s retail heart looks so good at that time of year. Throughout the year, we know that Brown Thomas also maintain a very clean exterior and maintain the laneways around their premises, so fully merited the award.