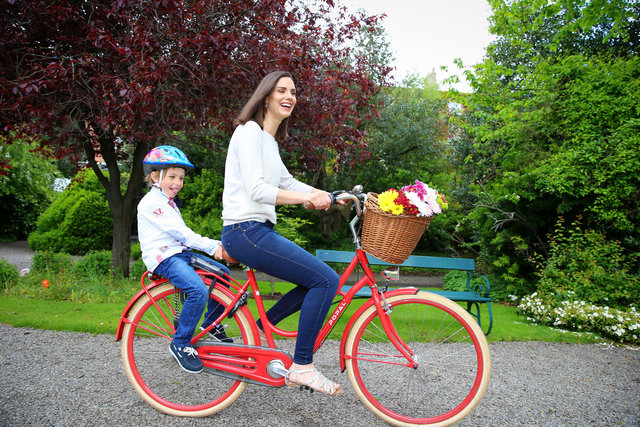 National Bike Week, which takes place annually, returns this summer from Saturday, June 11 to Sunday, June 19, celebrating and promoting all that is great about cycling.

Shane Ross TD, Minister for Transport, Tourism and Sport, said: Cycling is a great way to get around, and with National Bike Week promoting cycling this June, I hope to see more and more people enjoying the benefits of choosing a bike as their mode of transport.  Bike Week not only promotes the leisure and fun aspects of cycling as a family, with friends, to sightsee; it also highlights the other great benefits, health, saving money and efficiency. It is also a great solution to beating traffic congestion in our towns and cities.

Commenting on her role as ambassador at the National Bike Week 2016 launch, Alison Canavan, said: I’m delighted to be named as National Bike Week ambassador for 2016. As a mum, I know it’s a great way for families across Ireland to get active and incorporate cycling into their everyday routine, whether it’s going to the shops, droppings kids off at school or a family bike ride at the weekend. My son James recently had the stabilizers taken off his bicycle, so he is very excited. With so many events taking place locally throughout Ireland in the month of June, it’s a great opportunity for families to spend some quality time together.

Cycling is environmentally friendly, as it cuts congestion and has zero emissions, and it is also much lower in cost than travelling by public transport or a car. If you spend as little as €1.20 daily on travel you can save €200 a year by switching to a bike.

Commuting by bike to work, college, school or just to go to the shops, is often a much faster way to travel. Smarter Travel estimates that approximately 400,000 people in Ireland travel 4 kilometres or less to work or school or college by car every day – distances that could easily be cycled. Cycling is often the fastest mode of transport for journeys of 6 kilometres or less in urban areas during rush hour; imagine no more sitting in traffic jams.

Cycling as an everyday pursuit is a healthy way to travel too and it has many physical benefits. Studies have shown that cycling is one of the most efficient ways to lose weight. And, cyclists who cycle regularly are seen to be on the same fitness level to those ten years younger. Also, three hours of cycling per week can reduce the risk of heart disease by 50 percent. There are also mental health benefits derived from cycling.

Demonstrating the social, health and environmental benefits of cycling, Bike Week is coordinated at a national level by the Department of Transport, Tourism and Sport.

You can follow Bike Week on Twitter @BikeWeekie or on Instagram @BikeWeekie or like Bike Week on Facebook here.
For more information, your nearest Bike Week event and to join in a cycling adventure this June, log onto bikeweek.ie.
if you want to read more stories related to Bike Week, you can find them here.