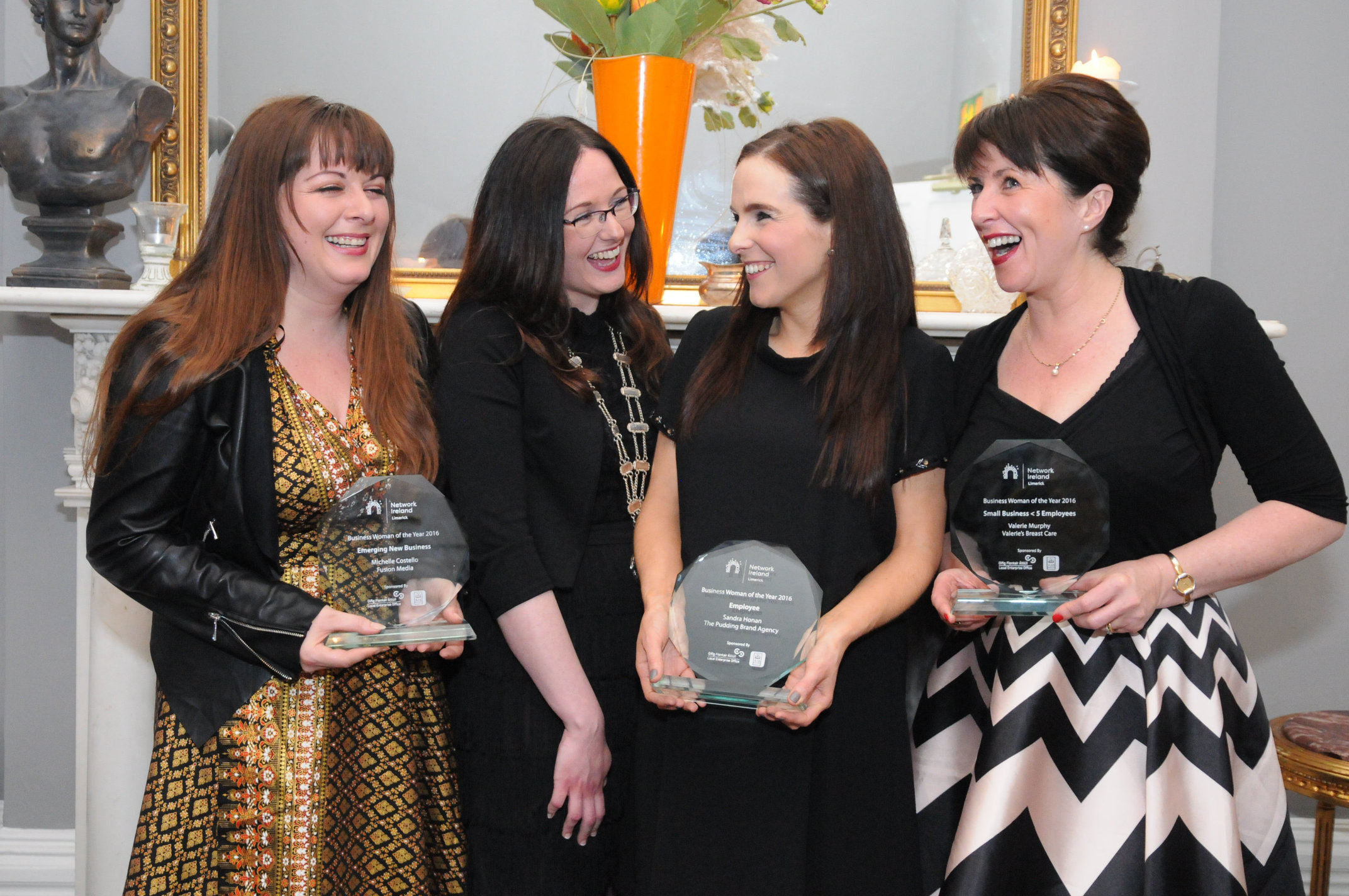 Three Limerick business women are in contention for an award at the Network Ireland National Business Awards 2016 which take place on Friday 30 September in the Clarion Hotel, Cork.

Michelle Costello, founder of Fusion Media, Sandra Honan, The Pudding Brand Agency and Valerie Murphy, of Valerie’s Breast Care all won awards at the regional Network Ireland Limerick Business Awards last May.  They are now competing against other regional finalists for a coveted national title.  The overall winners of each award category will be announced at a gala dinner, featuring a keynote address by Dee Forbes, recently appointed Director General of RTE.  MC for the evening will be broadcaster and entrepreneur Maria Walsh.

Michelle Costello, Fusion Media is in contention for the Emerging Business Award category, Sandra Honan, The Pudding Brand Agency for the Employee Award and Valerie Murphy, of Valerie’s Breast Care for the SME Award.

Michelle Costello has  played a key role in making Fusion Magazine and The Limerick Magazine what they are today. In 18 months since launching Fusion Media, Michelle has been responsible for publishing over 20 issues of the two different publications so far.

“The goal for both Fusion Magazine and The Limerick Magazine is that people who are in it are there to inspire others. The rest is to work and collaborate on lots of exciting and fun projects with fun and exciting people,” said Michelle Costello.

Sandra Honan is Chief Communications Strategist with The Pudding Branding Agency which specialises in Strategy and Design. Using the experience and knowledge she has gained after working for almost ten years in local and national media, Sandra also works with The Pudding’s clients on their PR and Communications. She works with them to identify brand messages they should communicate, unlocks the newsworthy potential within these messages and pitches them to the relevant media.

Valerie Murphy runs Valerie’s Breast Care, a service, which provides breast prostheses, mastectomy lingerie & swimwear to women who have had breast cancer surgery. She gives her clients the option of an appointment at her Limerick shop or a complimentary home visit in the Mid West Counties. Trained in Texas, in 2012, she has introduced new, fashionable & innovative American & European products to Irish women.

Louise Lawlor, President of Network Ireland Limerick said, “I’m delighted to see three very strong candidates represent our membership base at the national awards.  This is a great opportunity and platform to showcase their accomplishments and highlight their business achievements.  I wish them the very best of luck – everyone in Network Ireland Limerick is rooting for them.”

You can find more information on the National Business Awards 2016 here.
You can read more stories related to business here.