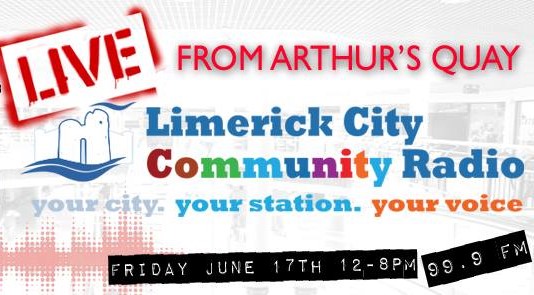 Wired FM and LCCR team up with a special broadcast for National Community Radio Day 2016 on June 17. Normally off air for the summer months, Wired will return for an isolated day of broadcast with the Limerick City Community Radio station to help celebrate community radio in Ireland.

The station will be on air from 9am-9pm, with the Outside Broadcast taking place from 12-8pm. There will be several unique events taking place during the day, final year LSAD student Rachel Fogarty will broadcast a special sound installation piece as part of her current Sounds of Knocklong series. Two new documentaries have been produced for the day, Leona McMahon’s personal look at her family’s emigration, and Shane O’Carroll’s look back at fifty years of local amateur drama in Limerick. There will be particular emphasis on Irish music during the day with lots of local acts dropping by, such as Emma Langford who launches her debut the following night in Dolan’s. There will also be specialist one off live music programmes such as Mark Browne’s award winning Éir Play, and John O’Regan’s Eclectic Celt to name but two.

Wired FM, Limerick’s only fully licensed student station, broadcasts Monday – Thursday for 48hours week during the college year. For the last two years, LCCR has been broadcasting on Wired FM’s frequency (99.9FM) at weekends. The two stations offer support to each other in numerous ways, and are planning more collaborative events in the future. It’s been a great year for both stations, having both picked up awards at this year’s Craol Achievement Awards, with Wired picking up distinctions for their current affairs show Wired In, and a specialist music award for the Unofficial Hip-Hop Nation. LCCR received an award for their programme Community Focus. The stations are also currently working on the production of an advocacy programme for older people, to find out more, tune in on the day to hear from the producers of the programme.

You can also check out Limerick City Community Radio here