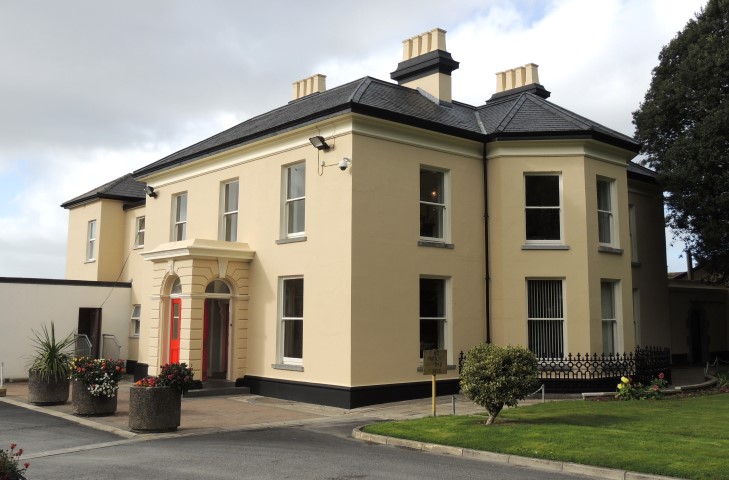 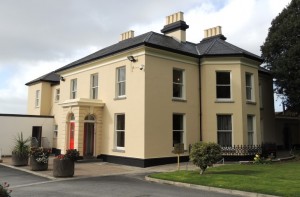 I hadn’t been to Tait House (formerly Southhill House) for several years and the last time I visited I was quickly counting the rooks that nest in the mature trees of the grounds. Today I was a guest on Mary Honan’s show on Limericks newest radio station “Limerick Community Radio. Mary does a very interesting and informative chat show covering a wide range of topics including animal welfare and I was delighted that my suggestion about doing a slot on wildlife was taken on board. Trying something different can often bring you back to familiar haunts and I arrived early to explore the wildlife and stir up some inspiration for the show. Limerick has some wonderful wildlife habitats and many of these are unknown by the public.

I parked the car and retrieved my butterfly net and binoculars from the booth and waved to the curious security guard who must have been wondering what this stranger was up to. I pointed to the trees and he gave a friendly wave back. 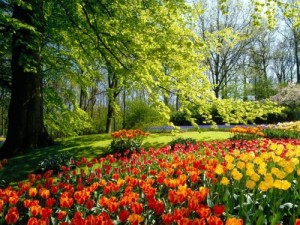 At this time off the year many flowers are in bloom and each step reveals a new treasure. The first plant I find surprises me. It is called Alexander’s and I have not seen it before in the city. The leaves are aromatic when crushed and it is a member off the carrot family.

Cleavers or sticky Willy is a very common plant and as every child or adult knows it sticks to your clothes. This is very beneficial for the plant as we and animal’s transport the seeds to new locations were they quickly colonize new territory.

In the Holm Oak a pair of starlings is singing. They are been drown out by the raucous calls of the nesting rooks. I count 11 nests in one tree, 2 and another and lost track with 3 found on the last tree. In Ireland all large black birds are called crows but there are a number of distinctive species. The two most common in the city are Jackdaws are rooks. Jackdaws build their nests in our chimney pots and have a grey neck, a white ring around their eye and a neat triangular beak. Rooks are bigger with a thick heavy bill and if you see them up close a beautiful purple sheen to their feathers. They nest in noisy colonies in tall trees and forage for soil in parks and large gardens.

Underneath the dapple shade of a sycamore tree I find a mini wildflower garden. Herb Robert has delicate pink flowers and is also known as cranes bill as it seed pod resembles the beak of a crane. On dry soil the whole plant will turn a dramatic blood red. Yellow dandelions and white daises pepper the grass and these two unfortunate weeds are brilliant for butterflies. Red dead nettle has the same shaped leaves as its more painful cousin but does not have the harsh sting.

In a tall Lime street a Goldcrest is singing. These are Irelands smallest birds and keep to deep cover. It weighs just 6grams and raises two broods during the breeding season. The male has a beautiful orange stripe on his head and the females in yellow.

By the front wall Bluebells are in flower under the shade off the trees. Cow parsley is a familiar roadside flower and turns the hedges white during May and June. In late summer it produces hard black seeds that are eaten by birds.

Elderberry is a common shrub and will flower in a few weeks time. In autumn its berries attract flocks of hungry Starlings and they are also eaten by foxes. A Wren starts singing and for such a small bird it has a powerful song. I am probably too near its nest and he is warning me to keep away. I heard a Jackdaw calling and see one on the chimney pot of the house. 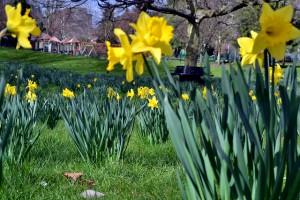 The lawns here are well maintained but some tall vegetation has been left for wildlife under the long branches off a Beech tree. Cow parsley, various grasses and Ragworth have escaped the lawnmowers. Wild edges are very important for nature as they provide flowers full of nectar for insects and seeds for birds.

In a quite corner grass, fallen branches from trees and the weeds from the flower beds have been stacked and left to decay. This creates a wonderful habitat for mini beasts that help to recycle the plant material and return it back to the soil. Birds like Blackbirds forage here and also find building material for their nests. One rotting stump is full of insect holes and the grubs will live in the timber for a few years before emerging as adults. 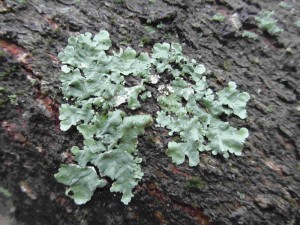 Lichens are amazing plants and can live on very harsh surfaces. They grow on the roofs off houses, headstones in graveyards and on trees. I find white lichen growing on the curbs by the road. They can be slow growing and consist of a fungus and algae that live together. Their combined skills help them to exploit any surface.

As I head towards the studio I pass a section off the high wall where the plaster has fallen off and exposed the bare stones. They are covered in beautiful lichens and if the rest off the wall was uncovered nature would colonize it too.

Blackbirds are common garden birds and I see a male looking for worms. A mature male is jet black with an orange beak and the females are dull brown. Housesparrows are calling and feeding on the ground and they eat insects and seeds.

The best is left till last and I see a beautiful Goldfinch. These are one off our most attractive finches and were once caught and kept as song birds.

The weeks fly and I back again to talk about nature. The natural world has leaped forward and as soon as I step out off the car I can hear young Rooks calling from their nests. Constant streams of adult birds are crossing the sky as they try to keep their hungry youngsters fed. I can also hear Jackdaws and they sometimes nest with the rooks in the trees. 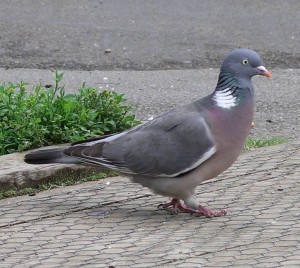 A Woodpigeon is cooing from a tree and they are much bolder and braver than their country cousins. Their nest is very flimsy and you can sometimes see the eggs from the ground. Meadow buttercup has its pretty yellow flowers and I see the male Blackbird again and this garden must be his territory.

Underneath the yew tree a tall sow thistle is growing. It has bright yellow flowers but its spines are very weak. If you break the stem you will find a milky sap that was once rubbed onto warts and it was suppose to heal them.

A Swallow is flying low and hawking insects and across the road in the housing estate I hear a Magpie calling. He flies from the roof off a house into a tall hawthorn tree. The Elderberry tree is in flower and these have many uses. They can be made into are refreshing drink and the berries make a delicious jam or wine.

The Hawthorn blossoms are late this year and like the cow parsley they turn the hedgerows are sea of white. Its fruits are blood red and are called Haws. They are an important source off food for birds during winter. Germander speedwell has delicate blue flowers and is also called “forget me not”.

Out on the lawn a pied wagtail is feeding. They are also called “wee willy wagtail” and have a long wagging tail. They catch insects and are one off the few birds to be found on the busiest streets of our city.

I head to the studio and I have a great chat with Mary around butterflies. As I am leaving I do a last bit of foraging for nature. A large area of grass has been left uncut and it is full off interesting flowers and bugs.

Bush vetch scrambles up the tall grasses. It has pale purple flowers and is excellent for bees. I find a worker bee gathering up pollen and it is called Bombus praturum. Throughout the meadow the tall white flowers of Oxy eyed daisy stand out and I also see groundsel and white clover.

Nettles are much maligned plants but when grown in the right place are one off the best plants for wildlife. As I gingerly search through a large patch I disturb a Magpie moth. They fly mainly at night and hide under the leaves of plants during the day.

Greenfly also live on nettles and I find two species off ladybirds. There are 4 of the common seven spot ladybird and 3 of the two spot ladybird. Children believe that each spot represents one year.

Many of our native butterflies lay their eggs on nettle and when the caterpillars hatch they wrap a leaf around themselves and can feed safe from predators and grazing animals. I find a leaf wrapped up with a web and I open it carefully and there are two black caterpillars inside. 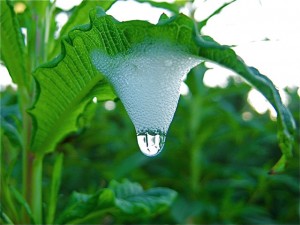 The last discovery of this amazing community is Cuckoo spit. It first appears as the same time as the cuckoo bird and people used to believe that the cuckoo spat on the plants. I gently scrape away the spit and find a tiny green insect called a froghopper nymph. This is a greenfly and sucks the sap off plants. It creates the spit and lives inside to protect it from predators and harsh dry weather. On a nearby house Housesparrows are calling and I also hear a collared dove. Their story is quite interesting. Fifty years ago they were very few pairs in Ireland but they have found a place in our environment and are now extremely common. All these plants don’t go to waste and I tease a large garden snail from the low wall the surrounds the meadow.

Our communities can often appear barren at first but nature is very tenuous and can survive in the most hostile off environments. We can all help by leaving patches of tall grass, sowing a few wildflower seeds, growing a few berried bushes and reducing the amount of sprays we use.

So next time you are out and about in your garden, park or soccer pitch spend a few minutes looking and listening and allow the world nature to be revealed.

Comments/questions to [email protected] or 089 4230502. Also tune in to Limerick Community Radio on the first Saturday of each month at 3pm for Nature slot.

For other nature stories by Albert Nolan go HERE.