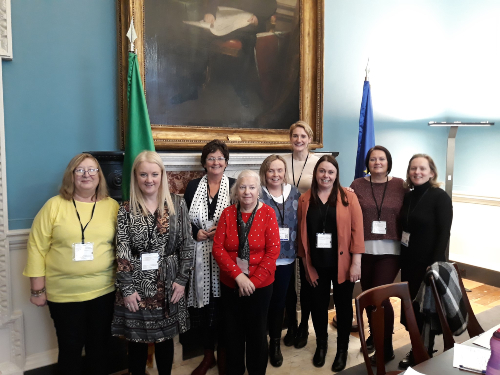 Limerick Councillors and members of the Limerick Women’s Caucus, Sarah Kiely & Sharon Benson, and women from the Representing Women Programme.

This week saw NCCWN Limerick Women’s Network travel to Dublin for a National meeting held at Leinster House with their group Representing Women and a number of local female Councillors, all members of the Limerick Women’s Caucus.

The event, organised by the National Collective of Community Based Women’s Networks (NCCWN) in partnership with the National Women’s Council of Ireland was to explore the possibility of forming women’s caucuses around the country at a local level.

Over the last few months, NCCWN Limerick Women’s Network has been working together with all eight elected female Councillors in Limerick to start a Women’s Caucus, the first of its kind at a local level in the country.  The meeting saw NCCWN projects and Councillors from around the country get together with some members of the National Women’s Parliamentary Caucus in the hope of other counties following Limerick’s lead.

Also in attendance at the meeting was, Representing Women, a group of women working with NCCWN Limerick Women’s Network.  The purpose of the Representing Women programme is to provide women with the time and space to learn more about community and political systems and structures before they put themselves forward for a representative role or if they are considering putting themselves forward for such a role.  This is an ongoing group and any women from Limerick city or county are welcome to join at any time.  It runs weekly, every Tuesday from 10 am – 1 pm and will return in January.

Further future programmes being offered by NCCWN Limerick Women’s Network include Training for Transformation and STEPS.  Information on both of these programmes will be available in the new year.

Coordinator of NCCWN Limerick Women’s Network, Edel Geraghty, said, “It has been a fantastic opportunity for us to work with the women councillors in developing a model of support for women in Limerick. We are equally delighted with the development of the Representing Women programme and it has been really positive to bring these two groups together for this National event to showcase the groundbreaking work happening in Limerick”

Anyone interested in signing up for Representing Women or who would like to learn more about that or the other programmes mentioned are welcome to contact Edel or Yvie on 087-3283746 / 061-275970.

Details can also be found on their facebook page: NCCWN Limerick Women’s Network.