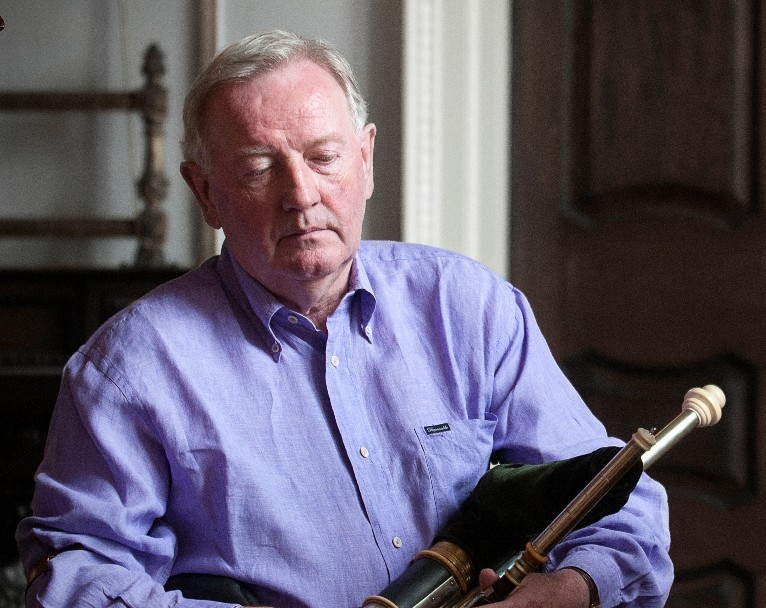 The evening will be presented and conducted by David Brophy. To mark this celebration, The Rolling Wave on RTÉ Radio 1 presents two programmes featuring highlights from Liam’s long and accomplished career in Irish music on Sundays 8 and 15 March at 10pm. These programmes will be repeated on RTÉ Lyric FM on Mondays 9 and 16 March at 7pm.

The evening, featuring musical tributes to Liam’s dear friends, the late broadcaster and music collector Ciarán MacMathúna and Nobel laureate Seamus Heaney, will include Liam’s own An Droichead (The Bridge), composed for the inauguration of Mary McAleese as President of Ireland, ‘Newfoundland’ from Shaun Davey’s The Brendan Voyage, Davey’s The Winter’s End, much-loved traditional tunes such as Mo Ghile Mear and the haunting and beautiful Port na bPúcaí and new arrangements of traditional tunes and airs by Shaun Davey, Neil Martin and Rod McVey.

Liam O Flynn is widely acknowledged as one of Ireland’s leading musicians. Whether with the hugely influential Planxty or as soloist with the RTÉ National Symphony Orchestra, as a solo piper or playing alongside some of the greats of traditional music like Seán Keane, Matt Molloy or Paddy Glackin, Liam is recognised as a true master of his craft. A Kildare native with strong west Clare family links, Liam is steeped in traditional music. Both his parents played music. Liam has the rare distinction of having studied under the three great 20th century piping icons – Leo Rowsome, Willie Clancy and Séamus Ennis. To this day Liam plays instruments that were bequeathed to him by Clancy and Ennis. Liam has issued a number of successful recordings, his most recent release being “The Poet and the Piper” which was made with his good friend the Nobel laureate Seamus Heaney. In 2007, Liam O’Flynn was awarded the 2007 TG4 “Traditional Musician of the Year”.

You can check out the National Symphony Orchestra on their Facebook page here, or their Twitter here.

You can check out the National Concert Hall on their Facebook page here, or their Twitter here.

You can check out Liam O’Flynn on his Facebook here.

PHOTOS – The Ludlow Collection returns to Limerick after almost a century