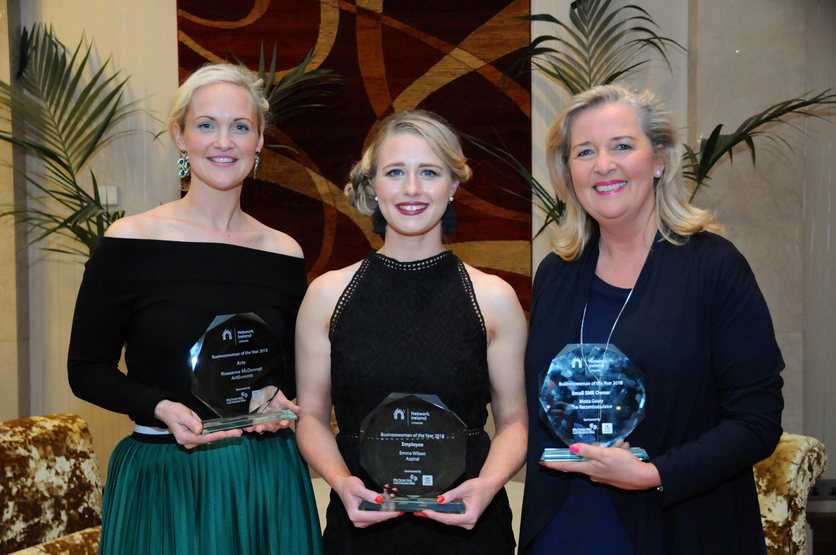 Five local businesswomen are in contention for an award at the Network Ireland National Businesswoman of the Year Awards which take place on Friday 14 September in the Galmont Hotel, Galway.

Cori Calvert, Glas Éireann Solutions, Moira Geary, The Recombobulator, Emma Wilson, Azpiral, Rosanne McDonnell, Art Business Summit and Caroline Dunlea of Core Optimisation all won awards at the regional Businesswoman of the Year Awards organised by Network Limerick last May.  They are now competing against other regional finalists for a coveted national title.  The overall winners of each award category will be announced at a gala black-tie dinner, featuring a keynote address by Senator Joan Freeman.

Cori Calvert, Glas Éireann Solutions is in contention for the Emerging Business Award category, Emma Wilson, Azpiral for the Employee Award, Rosanne McDonnell, Art Business Summit for the Arts Award, Moira Geary, The Recombobulator for the SME Award and Core Optimisation (Caroline Dunlea) is in contention for the Best Use of Digital by a company .

Valerie Murphy, President of Network Ireland Limerick said, “I’m delighted to see four very strong candidates represent our membership base at the national awards.  This is a great opportunity and platform to showcase their accomplishments and highlight their business achievements.  I wish them the very best of luck – everyone in Network Ireland Limerick is rooting for them.”

Glas Éireann Solutions was founded in 2017 by Cori Calvert who serves as the CEO. In her previous role as a Managing Director for a United States Federal Government natural resources agency, she spent 20 years gaining experience in the environmental market leading the State of California as well as the Caribbean. Cori possesses practical knowledge of the most up to date technological advancements in the environmental and energy conservation fields and has overseen the implementation of over 400 energy savings projects.

Emma Wilson is an Economics and Sociology graduate from the University of Limerick turned digital marketing advocate. In her first four years at Azpiral, she established digital marketing department, channels and processes for Azpiral and became the voice of Azpiral through her blogs. This inspired her to continue her studies in Digital Marketing and complete a postgraduate diploma in Digital Marketing through the Digital Marketing Institute of Ireland. She joined Network Ireland Limerick to expand her network, share ideas and learn from other marketers and business personnel.

Rosanne is the Director and Lead Creator of Art Summit Ireland and a proud mother of four children. She formerly practiced as a solicitor before blending her two passions of art and law together and to create a unique international art business conference based in Ireland. Art Summit Ireland has been highly successful in attracting significant audiences and media coverage from both the art and business worlds. Rosanne sincerely appreciates the continued support of her sponsors and the inspirational words of the Art Summit speakers.

Moira is a businesswoman, speaker and author of Wake Up and Change Your Life and has a rare and proven ability to help people to achieve extraordinary results. Despite coming through a very dark period in her life Moira has built her business from zero to over six figures annually during the recession. She is the ‘been there, done that girl’, working with people to overcome their blocks and demons in business and in life just like she overcame for herself. Mum to three sons and wife to Jeff, she regularly features in the media and also contributes to many publications.

Best Use of Digital by a Company – Core Optimisation (Caroline Dunlea)

Caroline is director and co-founder of Core Optimisation – Digital Marketing Agency. Having worked with the hospitality Industry growing online revenue for 8 years she co-founded Core Optimisation 4 years ago. Her straight talking approach to digital marketing and online revenue results saw their client portfolio grow. Proud to work alongside clients such as Fitzpatrick Castle Hotel, Citywest Hotel, Shannon Heritage Compub, Laura Ashley Hotels, The Arch London and Eurochange to name a few. Caroline is Mom to two wonderful children and enjoys cycling and hiking and includes climbing Kilimanjaro as one of her greatest personal achievements.

Related Topics:business awardsfemale winners
Up Next