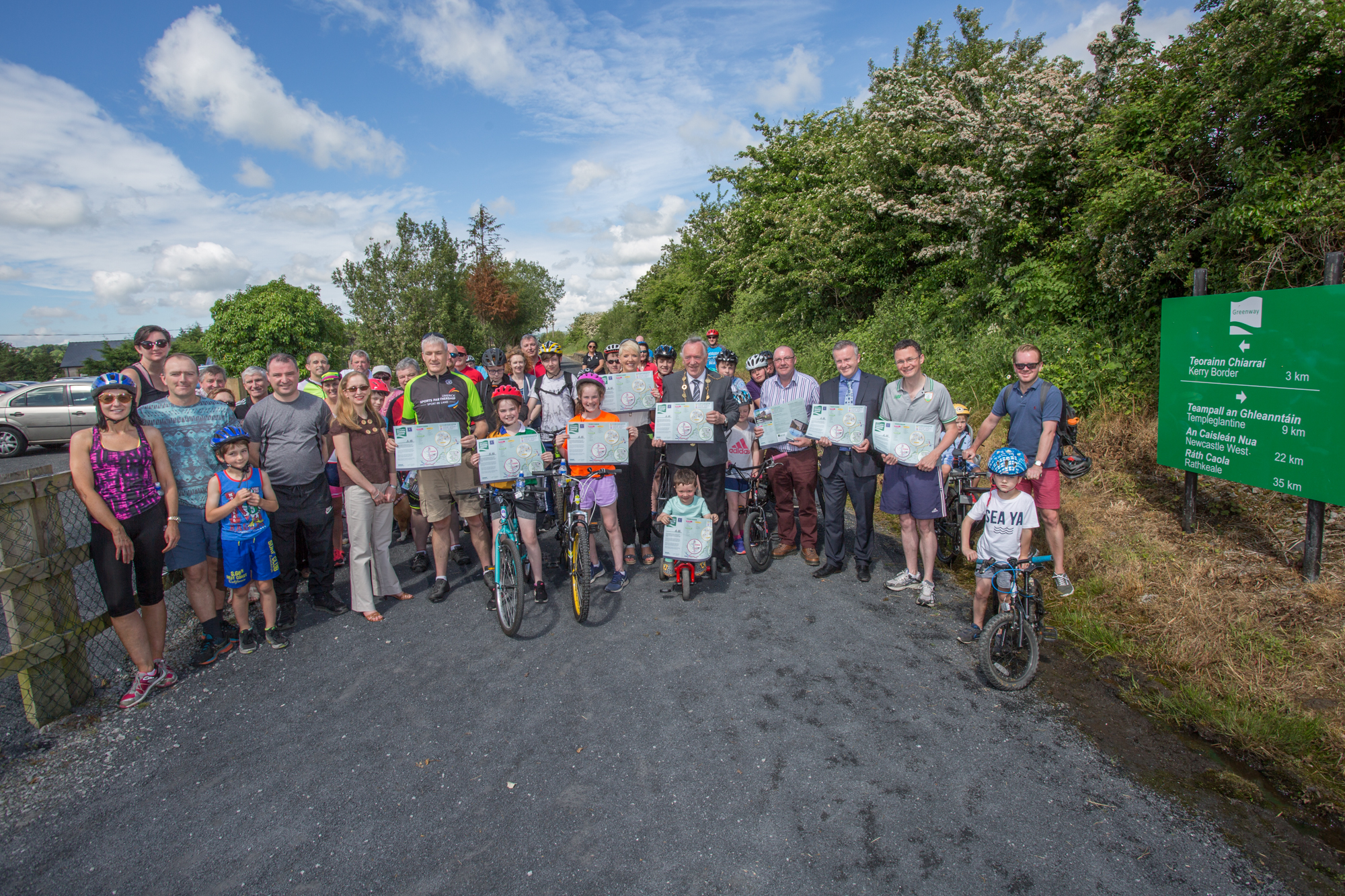 Three New Abbeyfeale Newcastle West Rathkeale Town Loops integrating the three towns, with the Great Southern Greenway Limerick have been opened as part of the latest phase of the multi-million-euro re-development of the route.

As part of the New Abbeyfeale Newcastle West Rathkeale Town loops, new brochures, and signage have been created which identify places of interest in each town along with the access points, length, terrain and time to complete each of the various sections of the Great Southern Greenway Limerick. Each loop is colour coded.

The Great Southern Greenway Limerick is a 39-km, off-road walking and cycling route along an old railway line that connects the three market towns of Abbeyfeale, Newcastle West and Rathkeale in West Limerick.

Those who travel along the route are promised a spectacular journey through time, heritage and nature and gives an opportunity for you to learn more about the people, heritage, and environment of one of Ireland’s hidden jewels, West Limerick.

Since Limerick City and County Council took over the management of the Great Southern Greenway Limerick in 2015, the local authority has embarked on a multi-million-euro re-development of the 39km route.

All farm and road crossing gates have been upgraded to make them more suitable for cyclists. Drainage, fencing, and surface enhancement works have been carried out while new signage, cycle stands, and benches have been installed.

Future plans include the incorporation of the Barnagh Tunnel and viewing area into the Great Southern Greenway Limerick route and an extension to the greenway to Ballingarrane, north of Rathkeale.

Since the introduction of a pilot counting scheme in Newcastle West nine months ago, figures show that 4,500 pedestrians and cyclists per month are traveling along that section of the Great Southern Greenway Limerick.

Speaking at the opening of the loops Mayor of the City and County of Limerick Cllr Stephen Keary said, “It is a fantastic resource to have on our doorstep and I would encourage everyone to use it and enjoy the wonderful surroundings and facilities of West Limerick as the travel along it.”

“Tourism is an incredibly important sector, one that Limerick is beginning to grow. By having these new loops along the greenway, it will attract cyclists and walkers using the greenway into our county towns, as part of their journey.  This will help to drive the economic development of these towns and will help to increase the profile of the greenway, as it will be easily accessible and visible from the towns.”

Minister of State Patrick O’Donovan said, “I’m delighted to officially launch these loops off the Great Southern Greenway Limerick here in Abbeyfeale.  The Greenway has seen its popularity rise steadily over the last number of years amongst locals and visitors alike.”

Brian Kennedy, Head of Tourism Development with Limerick City and County Council added, “Limerick City and County Council is looking at ways to develop the tourism across the city and county.  The Great Southern Greenway Limerick is a fantastic resource already in place and we are working with the local communities and organizations along the route to make the most of it.”

As part of the launch, and to mark World Cycling Day last Sunday, June 3, a special family cycle has been organized between Limerick City and County Council and Limerick Sports Partnership from Abbeyfeale to Templeglantine Community Hall a distance of around 18kms.

A Cow, Biodiversity and Free Family Cycles among the highlights of Limericks BeSPOKE Cycling Festival 2018